For all the points Eric Ayala scored vs. Michigan, one hustle rebound stands out most 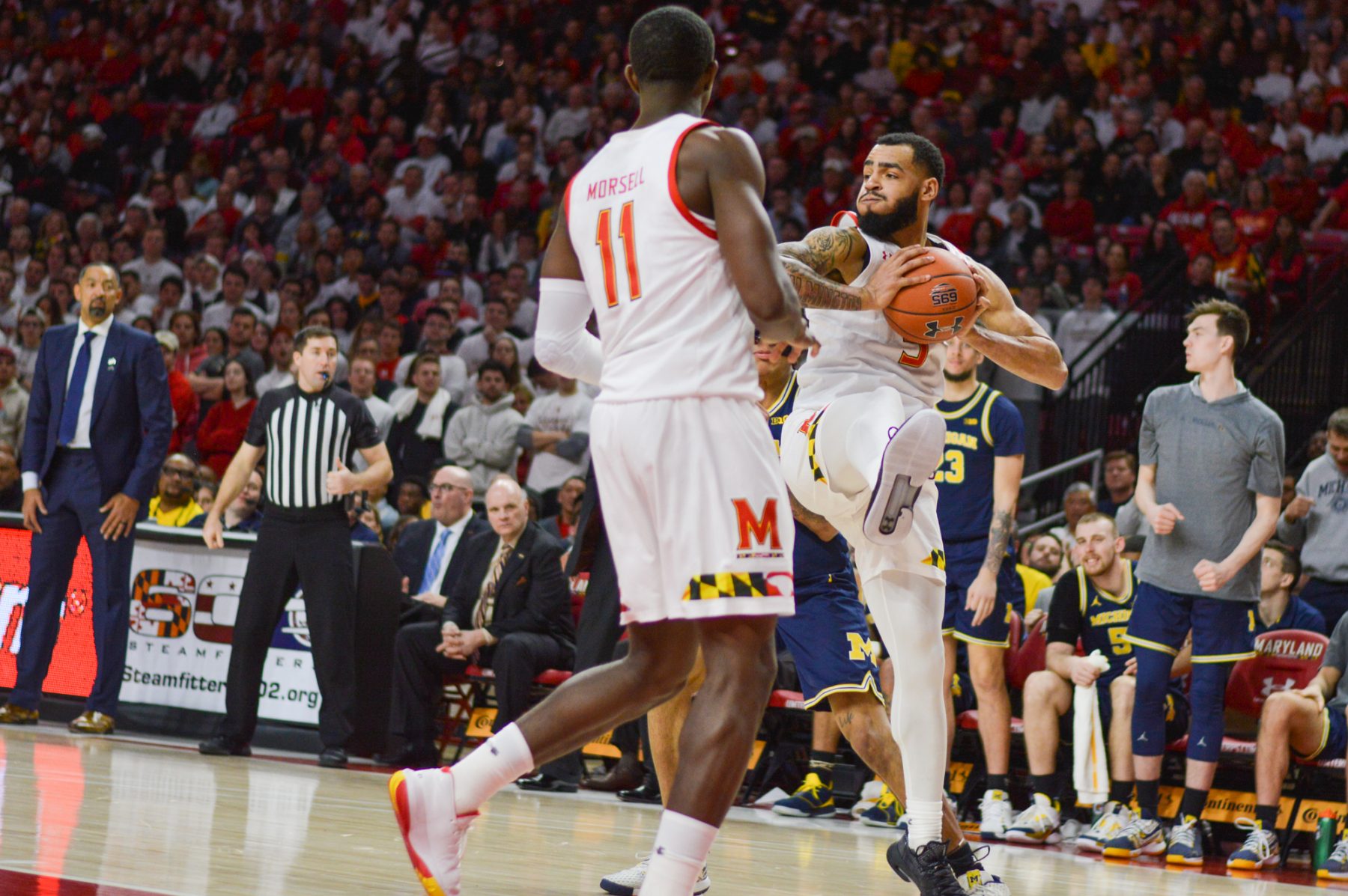 Guard Eric Ayala pulls in a rebound during Maryland's 83-70 win over Michigan at Xfinity Center on March 8, 2020. (Joe Ryan/The Diamondback)

He could hear coach Mark Turgeon’s voice cut through the hushed Xfinity Center crowd with five minutes to play, calling for him to slow down at the free-throw line after missing his first. But Maryland men’s basketball guard Eric Ayala still missed his second attempt off the front iron.

In the five seconds that followed that clank, forward Jalen Smith penetrated the paint, flailing an arm to tip the ball long. Turgeon, standing with his arms folded along the sideline, bent his knees in momentary frustration. Ayala tracked the ball and pulled it down despite the best efforts of Zavier Simpson and David DeJulius around him. Ayala fired the ball to guard Aaron Wiggins in the corner.

And then Turgeon pumped both fists as Ayala turned his way, celebrating Wiggins’ make.

“I looked at him, I was like, ‘That’s better. We got three [rather] than two,’” Ayala recalled postgame.

For all the good things Ayala did Sunday afternoon — and most of them involved the ball passing through the rim — it was what he did after missing two consecutive free throws that may stand out most. Despite posting a season-high 19 points, that hustle play stymied Michigan and propelled the Terps onto a Big Ten regular-season title, enabling them to cut down the nets Ayala had so frequently sent shots swishing through.

“Maybe the biggest offensive rebound of the game — he missed the two free throws, but that’s when I knew we were going to win,” Turgeon said. “Eric gets that offensive rebound against two big guys, throws it out to Wigs and he makes the three. And I was like, ‘All right, it’s our day.’”

Turgeon saw signs of Ayala’s Sunday showcase during Friday’s practice. During that session, Ayala’s flair was full-on. He sent behind-the-back passes to his teammates, knocked down 3-pointers and looked to have an extra bounce in his step.

That hasn’t always been the case this season, with Ayala suffering from periodic slumps during his sophomore campaign. There was a 11-game stretch between December and February in which he didn’t reach double-figures. And even after hitting four triples against Nebraska on Feb. 11, Ayala hasn’t been a model of consistency. Ayala shot a combined 6-for-25 in recent matchups with Northwestern, Minnesota, Michigan State and Rutgers.

But in that Friday practice, as Turgeon watched Ayala ball out, he turned to assistant coach Matt Brady.

He looked more like the Ayala of last season, Turgeon said, the one who hit 40.6 percent of his 3-pointers — 13.2 percentage points better than the 2019-20 slate. That seemed to be the Ayala who took the floor for Sunday’s regular-season finale, too.

Ayala nailed three of his four attempts from beyond the arc in the second half. With just over eight minutes to play and Maryland’s lead down to six, Ayala began to drive on Wolverines guard Eli Brooks before stopping on a dime and hopping behind the three-point line. Brooks couldn’t stop, and Ayala drained the open triple as the crowd rose to its feet to applaud the move.

If Turgeon had one criticism of the way Ayala played, it was for those two missed free throws with five minutes remaining. He still made up for it by corralling the offensive board and firing to Wiggins, though, and he finished the deal with four makes from the charity stripe with the clock nearing zero.

“It was a big momentum booster for our team,” Wiggins said. “Eric, he has a passion to go get every loose ball. So I mean, seeing him ending up grabbing it over two Michigan players, and then make the right play, in terms of finding me, that was real big for us.”

It might not have been the most fluid play — grappling for a loose ball after two misses — but it earned a smile from Turgeon, settling any fears within him that Sunday’s contest might slip away. And it led to a cheeky remark from Ayala.

After all, Wiggins’ three put more points on the board than Ayala’s missed free throws would have. It was almost as if Ayala had planned it — almost.