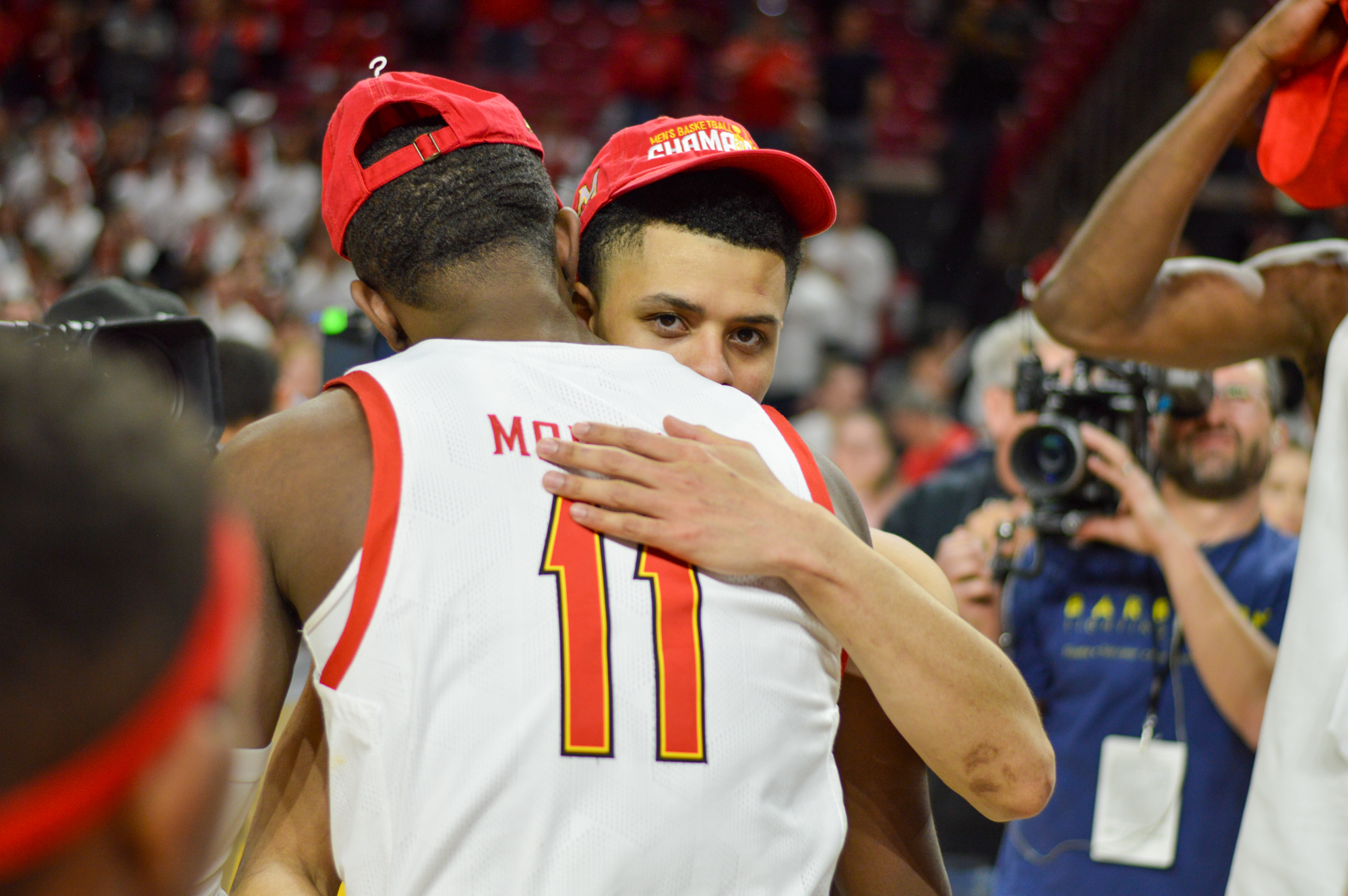 Guards Anthony Cowan and Darryl Morsell celebrate winning a share of the Big 10 title after an 83-70 win over Michigan at Xfinity Center on March 8, 2020. (Joe Ryan/The Diamondback)

Maryland men’s basketball forward Jalen Smith was a consensus All-Big Ten First-Team selection between the coaches and media, while guard Anthony Cowan received first-team honors from the coaches and second-team recognition from the media, the conference announced Monday.

Meanwhile, guard Darryl Morsell was an honorable mention selection by the media.

All season long, it’s been the tandem of Cowan and Smith that has led the Terps to the share of their first conference title since 2010, and the program’s first since joining the Big Ten in 2014.

Replacing former forward Bruno Fernando, who left early after last season for the NBA draft, was no small task for Smith. But the sophomore proved to be up to it.

The Baltimore native entered the season with NBA draft pundits widely projecting him to be a first-round pick. But, Smith struggled out the gate — namely from beyond the arc, where he started the season 2-of-15.

After the calendar flipped to a new year, though, there was a new Smith for Maryland.

The shift in play coincided with the departures of Makhel and Makhi Mitchell, which pushed Smith to the five. Despite the positional maneuvering, Smith flourished.

Smith followed his All-Big Ten Freshman Team selection in 2019 with statistical improvements across the board. He finished with 15.5 points per game and averaged 10.5 rebounds, while converting 53.8 percent of his shots. Smith shot 36.8 percent from three-point range and 75 percent from the free throw line, nearly 10 percentage points higher than his rates in each category last campaign.

“He’s actually doing better than I imagined this year,” coach Mark Turgeon said in February. “And even two months ago, in December, I wasn’t sure we could get to this so fast.”

Cowan’s inclusion on the Big Ten’s first-team is his first — he was a third-team selection in 2018 and a second-team in 2019.

Turgeon and Cowan will both say that the point guard withdrew his name from NBA consideration and returned to College Park to win a championship. But Cowan also takes individual honors personally.

Following Cowan’s heroic performance against Michigan State, when he scored 11 points in a row to lift the Terps to a crucial comeback road victory, the Bowie native smirked and wisely said “Next question,” after being asked if he takes matchups against other top guards personally.

Less than an hour later, Cowan retweeted the list of semifinalists for the Bob Cousy Award given to the country’s best point guard — a list that he wasn’t on.

The past two days have been the best of both worlds for Cowan. He got his regular season title after Maryland’s 83-70 victory over Michigan on Saturday.

Now, he has his Big Ten honor, too.

The senior continues to climb up the record books at Maryland, already becoming the program’s all-time leader in consecutive games started and free throws made. Now, he turns his attention to the postseason, an area of difficulty for the Terps over Cowan’s four-year career.

During his final regular season in College Park, Cowan led the team in scoring and assists with 16.6 points per game and 4.7 assists.

Morsell, the third member of Maryland’s team to garner conference honors, was a do-it-all player for the Terps. Often called a “glue guy,” the Baltimore native averaged 8.5 points, 4.7 rebounds and over two assists per contest.

“I’m a huge Morsell fan. He’s just going to give you all the dirty work, every single night,” Northwestern coach Chris Collins said after the guard had 13 points, seven rebounds and seven assists.

The junior also had his fair share of key moments for the Terps.

In Maryland’s Orlando Invitational championship title game in November, a small contingent of Terps fans who made the trek chanted Morsell’s name after he held Marquette’s Markus Howard, the nation’s leading scorer, to six points on 0-6 shooting.

Then there was the game-winning 3-pointer against Minnesota to complete a furious 17-point comeback, which ultimately played a huge role in Maryland securing a share of the Big Ten regular-season title.

All three of the Big Ten team selections hail from the state of Maryland. Cowan, Smith and Morsell all came up large in big games to lead the Terps back to a trophy — a department Turgeon’s squad lacked in throughout his tenure.