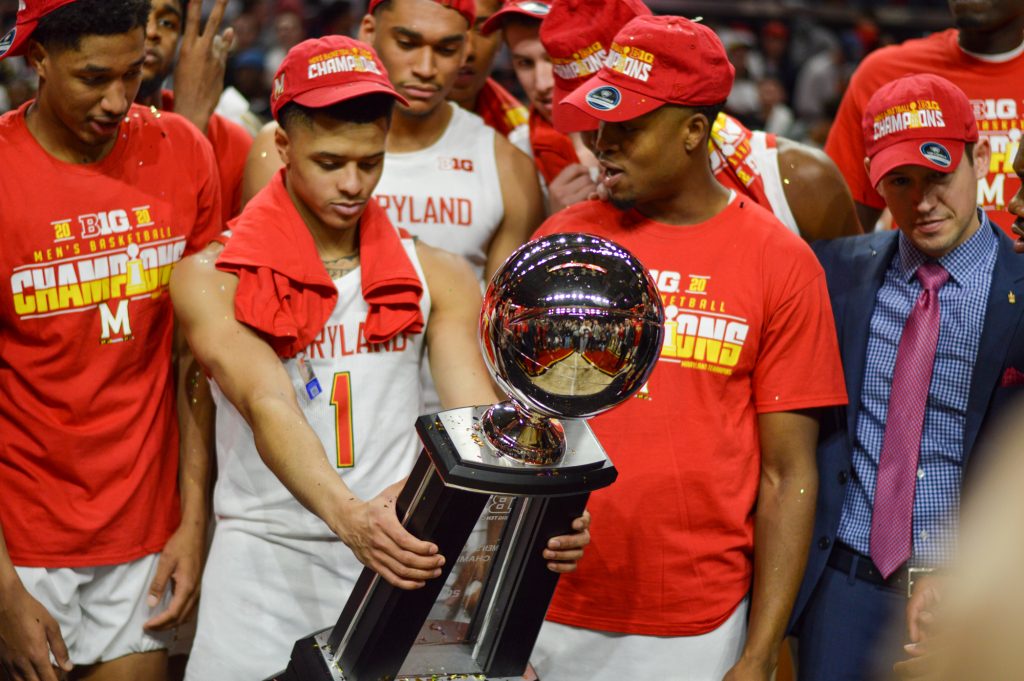 The final AP top 25 poll of the regular season is a mere formality that serves as a transition to tournament play, when seeding is the number next to team names that people really care about.

Nevertheless, Maryland men’s basketball checked in at No. 12 on those rankings Monday after a week that included a road loss to Rutgers and a home win over Michigan.

After the victory over the Wolverines, there was an on-court celebration and net-cutting to celebrate the team’s share of the Big Ten regular-season title.

The celebration was full of smiles, speeches and self-reflection — especially from Turgeon and guard Anthony Cowan — but eventually, the players spoke to the media about there still being more to accomplish in the near future.

“We’re not done,” guard Aaron Wiggins said. “We want to compete for more.”

But as the Terps and the other conference teams prepare for the Big Ten tournament on Friday, the only number that truly matters is the seed — both now and the NCAA tournament position coach Mark Turgeon’s team wants to improve upon.

Turgeon’s team finished in a three-way tie for the Big Ten regular-season championship. But because of tiebreakers, Wisconsin received the No. 1 seed in the conference tournament, and Michigan State landed at the second spot.

As the No. 3 seed, Maryland still has a double-bye, and the Terps will play Friday night against either six-seeded Penn State or the winner of the Indiana versus Nebraska first-round game.

In terms of the NCAA tournament, ESPN bracket analyst Joe Lunardi projected Maryland as a No. 4 seed on Sunday, before the Terps’ victory over the Wolverines.

Early last week, Lunardi had Maryland as a two seed, but the Terps’ skid of three losses in a four-game span bumped them down. With the Big Ten tournament providing another opportunity for high-quality wins for the resume, it’s possible for Maryland to move back up the seed line before ‘Selection Sunday’ on March 15.