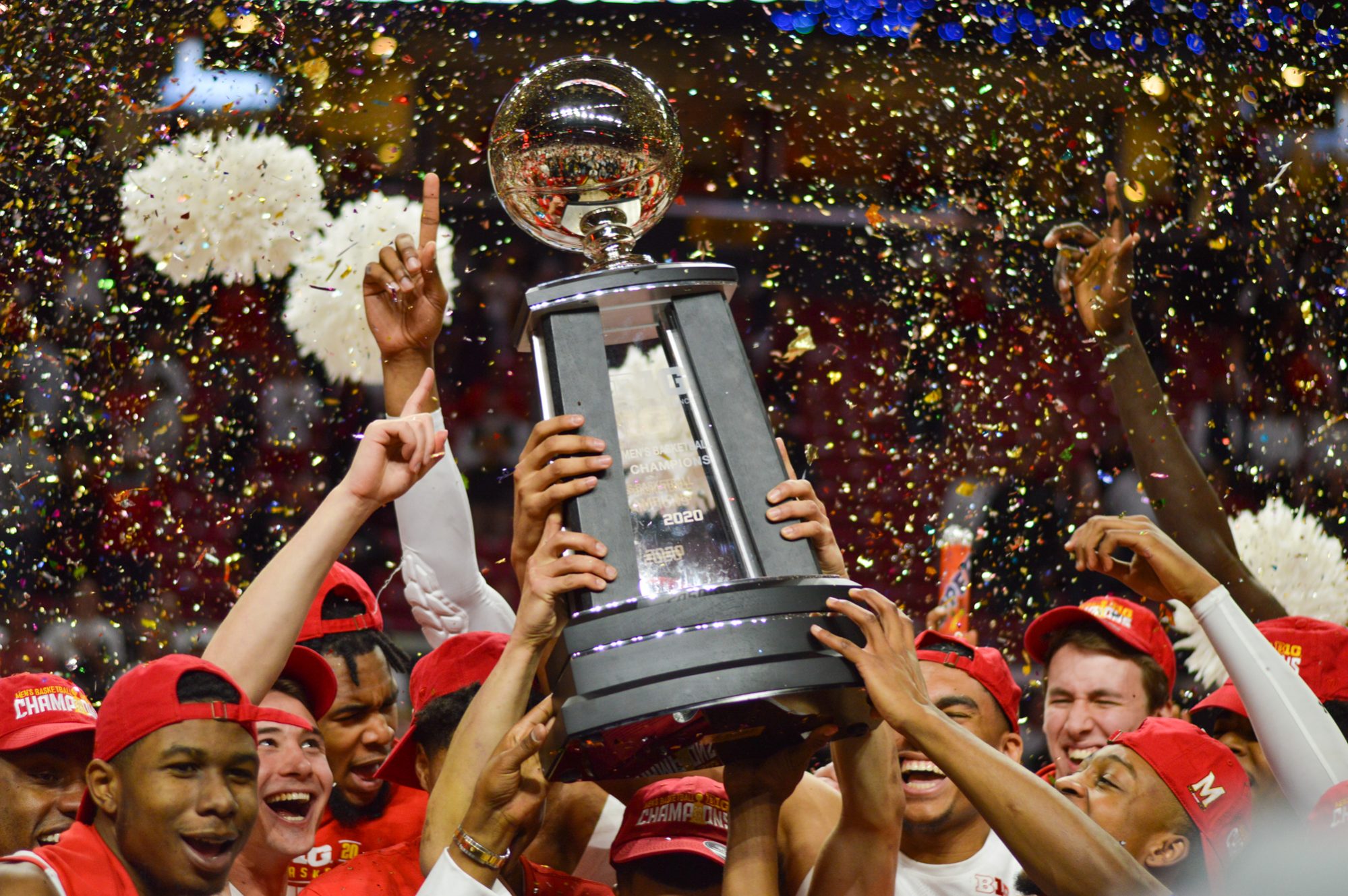 Mark Turgeon had been planning this moment for some time. Not the specifics — that would come spur of the moment as emotion bubbled over into giddy excitement — but the Maryland men’s basketball coach knew he wanted Anthony Cowan to have one last goodbye to an Xfinity Center crowd that’s watched him all this time.

For so much of Cowan’s four years here, the guard has been central to the Terps’ ups and downs. And as Turgeon rode an elliptical in the buildup to Sunday’s 83-70 win over Michigan, he began to tear up, thinking of how he could get Cowan one more standing ovation, one more lasting memory.

“He deserves that,” Turgeon thought while pedalling away. “I hope it works out.”

When the Terps held that 13-point advantage with 26 seconds remaining, Turgeon knew that moment had arrived. He signaled to the bench, calling for senior guard Travis Valmon to take the floor. And then Cowan made his way off it — momentarily raising both arms to acknowledge the cheers of 17,950 onlookers.

Cowan dapped up Valmon. And then he reached Turgeon, and that’s when his coach bent his knees, put his arms around Cowan and lifted the senior into the air, twirling him around. For that embrace, the unique relationship between coach and star was clear. They’ve grown together, Cowan and Turgeon. They’ve brushed off criticism and felt how tournament losses can sting.

Those losses could still come over the next month, when the unpredictability of postseason play comes to a head. But for that moment, Cowan and Turgeon spun by themselves, a weight off their shoulders, pent-up breath released, a share of the Big Ten title secured.

[Read more: Out of the main spotlight, Travis Valmon leaves a Maryland basketball legacy of his own]

Maryland gets to hang a banner like this one for the first time in a decade, back when the Terps split conference title honors with Duke in the ACC. These feats are rare, and there was even less of a guarantee once they moved to the Big Ten, adjusting to a new conference and finding itself among the best — splitting the title with Wisconsin and Michigan State.

But after the final buzzer sounded, that trophy gleamed on a table with a throng of players wearing Big Ten championship hats and shirts. And when they hoisted that hardware, confetti swirled and the players jumped and the crowd shrieked.

And it was Cowan hoisting most of that trophy’s weight, the first item on a senior-year bucket list checked off his list after a 24-7 campaign.

“It’s like the cherry on top,” guard Eric Ayala said. “We’ve got a lot more cherries to add on to it, but it’s just the cherry on top. You know, he had a phenomenal career here at Maryland.”

The Terps had plenty of opportunities to wrap this title up earlier, of course. There was a chance one week ago when Michigan State and ESPN’s College GameDay came to College Park. A win then and a share of the Big Ten regular-season title would have been secured with two games to spare.

And then there was an opportunity in Piscataway, New Jersey, but that game proved ugly from start to finish, the Scarlet Knights dispatching the Terps handily at the Rutgers Athletic Center.

On Sunday at Xfinity Center, though, with Cowan, Valmon and Will Clark appearing for one final time in front of the home fans, the defense that had defined this team seemed to return. And that set up the early makings of what might’ve been Maryland’s most dominant first half of the Big Ten slate.

“We played like we’re capable of playing,” Turgeon said. “We looked like Maryland, the team that was 23-5, ranked ninth in the country. We looked like that team.”

Cowan cashed in 10 of his 20 points in the opening frame and Aaron Wiggins and Darryl Morsell added triples. And with three seconds left, it was forward Jalen Smith who the Wolverines left open on the inbounds pass. And it was Smith who ran down the floor, taking the space Michigan offered him before pulling up from 30-some feet and sinking the 3-pointer.

That dagger sent the Terps spilling from the bench in celebration and into the locker room with a 13-point lead, and it offered them their first halftime edge since Feb. 18, after a gauntlet stretch that included three losses in their final five games.

“When we came into the season, Coach Turgeon told us we were gonna have a target on our back,” Smith said, “and we handled it the way we should’ve.”

Michigan made a run, cutting the scoreline to a three-point game with just over 10 minutes to go. But Ayala played a large part in building the Terps’ advantage back up, knocking down two threes in quick succession as part of his 19 points.

And then Maryland did what good teams tend to do — make critical free throws down the stretch.

That allowed Turgeon to turn to his bench, introducing Clark and Valmon into the game for a final send-off at Xfinity Center. And it allowed for Cowan to make his way off the court, setting up a lasting moment with Turgeon before the confetti flew, before the trophy was raised and before they climbed onto ladders to cut down the nets.

“We’ve always got some type of fan, or so-called fan, or people always talking down on us,” Cowan said. “So for us to be able to come and get one together is huge.”

It was a moment four years in the making, a moment for player and coach to cherish long after the final buzzer and the fanfare and the press conferences. And it was a moment that will remain ingrained in the Xfinity Center’s fabric, immortalized on a banner hanging from the rafters — a hug that captured the emotions of a Big Ten regular-season title.