Out of the main spotlight, Travis Valmon leaves a Maryland basketball legacy of his own 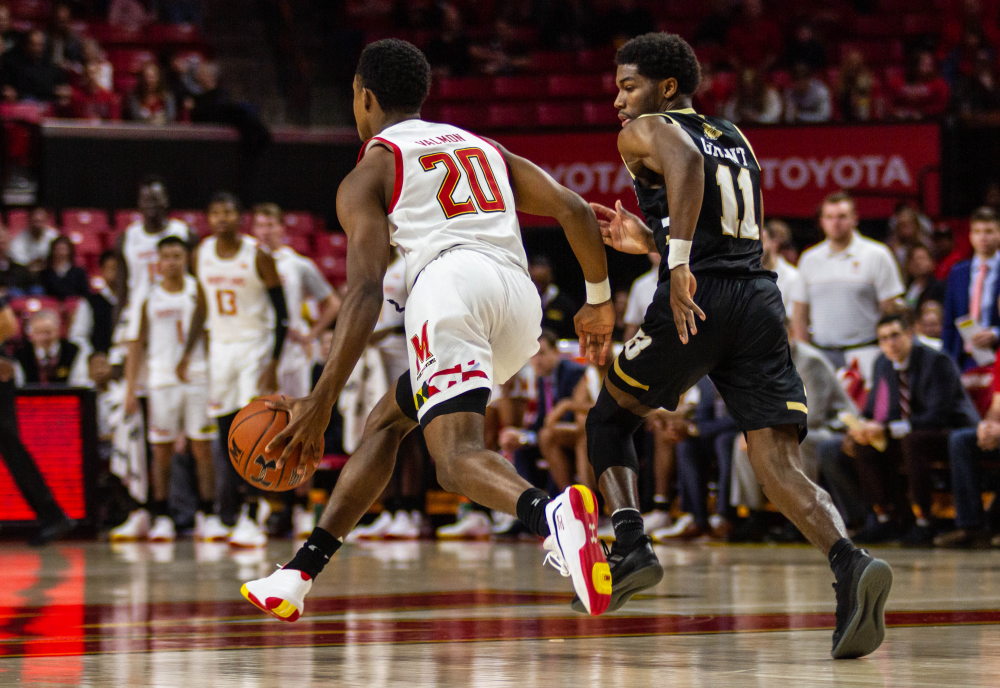 Travis Valmon could’ve left, and Mark Turgeon made sure he knew it.

The Maryland men’s basketball guard would hear it every year, the same spiel from his coach, telling Valmon he could see more playing time if he opted to transfer to another program. Those conversations — which would stem from Valmon’s performances in practice rather than games — always ended the same way, though.

Valmon wanted to stay. He knew what his role was and was happy to play that role. He knew it would be in practices — not games — where he’d leave his largest mark on the team he grew up loving. And he knew, while his own name would be so infrequently announced to the Xfinity Center crowd, it was his effort that helped the names of his teammates be called again and again.

The senior joined the Terps the same time as guard Anthony Cowan. Now, four years later, both of their Maryland careers are winding to a close. Cowan’s a household name, who’s started 129 straight games and scored 1,880 points and may one day have his name hanging from the rafters alongside other Terps legends.

But Valmon, he’s the one behind the scenes. He’s the one who’s pushed Cowan and his teammates every step of the way. And when Maryland plays its regular-season finale against Michigan on Sunday, Valmon will be honored for those contributions — the efforts away from the public eye that leave a legacy of their own.

“He’s given as much to this program as I have,” Cowan said.

[Read more: From Eppley to Xfinity: Will Clark’s roundabout journey to Maryland basketball]

So much of that stems from Valmon’s work in practice, running the scout team as the senior leader and pushing the starters as hard as he can. He’s not shy to call out his teammates when he sees something that could be improved, and Cowan feels that alone has helped him grow as a player.

Valmon’s teammates can see his intensity in shell drills, a half court 4-on-4 setup meant to practice defensive positioning as offensive players swing the ball around the three-point arc. It’s there, once the offense becomes “live” and can score, that guard Darryl Morsell says Valmon is prone to “dominate.”

It doesn’t lead to points nor playing time. The 6-foot-1 Rockville native has posted 19 points during 45 career minutes over 27 games. But that’s not why Valmon shows up to each practice ready to work; if it had been, he likely wouldn’t have been in College Park for long.

“He understood his role, which is real important to me,” Turgeon said. “And he’s made us better because he understood it.”

The relationships Valmon’s made since joining the program tied him down, too. He’d been a Maryland fan growing up, and had been around the school since his father, Andrew, became the Terps’ track coach in 2003.

And while Valmon admitted the thought of playing elsewhere can still trickle into the back of his head, the friends he’s made on the team and his connection to the program push those thoughts back out again, reaffirming his purpose with the Terps.

“I just don’t think anything else could beat wearing Maryland across my chest,” Valmon said. “Day-in and day-out, I just try to give everything I can to the program.”

[Read more: Defense has often been a strength for Maryland basketball. As of late, it’s a weakness.]

Everything can be quite a lot. Turgeon pointed to Valmon’s positive attitude and endurance, never subbing out during drills in practice. Cowan commended Valmon’s accountability, pushing his teammates and ensuring they don’t become lackadaisical.

And when Morsell thought about Valmon’s behind-the-scenes role, pushing Cowan and the team to a top-10 ranking and the brink of a Big Ten regular-season title through his commitment in practice, he had to let out a chuckle.

“I wish Travis had like a mixtape of his practice, because Travis gets it done,” Morsell said. “I’ve seen Travis grow just as much as Anthony has over the years. It’s crazy.”

Valmon hopes he can get some video of his play in practice, too, some documentation of his impact on Maryland. He doesn’t think he’d ever release it to the public — after all, so much of his career was out of their view anyway.

Instead, he’d want that video for himself. He’d want to look back at it 10 years down the road, when his competitive basketball days are done. And then he’d smile, remembering all those fond memories that may not have manifested into game time, but ensured Valmon would leave an imprint on the program regardless.