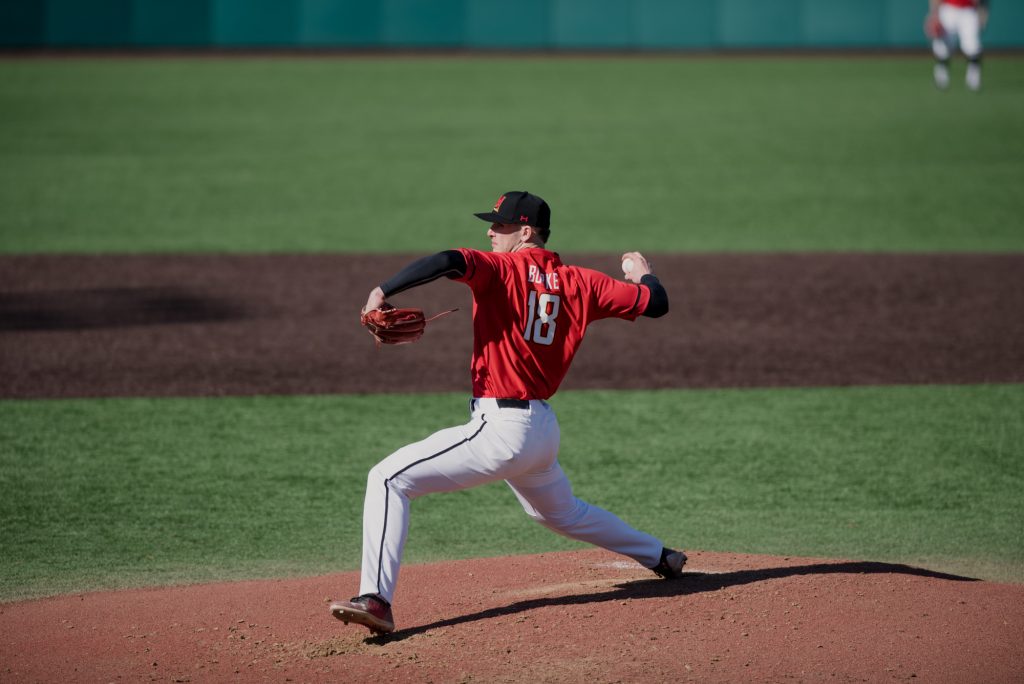 With Maryland baseball trailing Bryant 1-0 in the first inning Sunday, Sean Burke was already reeling. The first three batters the right-hander faced reached base — two on hits and one on an error. There were runners on second and third with no outs, and the Bulldogs were teeing off on the redshirt freshman’s fastball.

But after a mound visit from pitching coach Corey Muscara, Burke settled in. He struck out the next three batters, and the Terps rode that momentum to a 13-3 victory that clinched a series sweep.

For Burke, it was yet another scrappy performance. He gritted through six innings and 114 pitches against Bryant, never entirely perfect, but always battling — and coming out on top.

“I don’t know if there’s too many Sunday guys around the country doing what he’s doing,” coach Rob Vaughn said.

Fourteen games into the season, Burke leads Maryland’s starters in a handful of statistical categories. Through four starts, he has a 1.99 ERA and 35 strikeouts on the season. Eleven of those came on Sunday, the most in a single game by any of the team’s pitchers this campaign.

“It’s a huge weapon,” Vaughn said. “You run a guy out there with that caliber of stuff and that kind of competitiveness, you feel pretty good about what kind of effort you’re going to get.”

Burke’s stuff includes a powerful low-to-mid 90s fastball and a sharp curveball that keeps opposing batters off-balance. But before the season began, Burke was uncomfortable with his arsenal.

He didn’t enter games with a solid plan, he said, trying to mix in all of his pitches — including a change-up and cutter that were still a work in progress — in battles with opposing hitters. So Burke worked with Muscara and tinkered with his approach to focus on his two strongest pitches.

“In the preseason, when I struggled a little bit, I was trying to do too much and trying to make things way bigger than they were,” Burke said. “So I think now having a simple pitch plan and making adjustments along the way as I go if I need to [is important].”

At the start of Sunday’s contest, that plan was put to the test. Bryant sat on Burke’s fastball — the only pitch he threw to their first three hitters — and quickly scored a run.

But the right-hander wasn’t fazed and escaped that jam. He faced a couple of similar predicaments later in the game, but worked out of them each time with minimal damage.

To Vaughn, that’s a sign of the redshirt freshman’s maturity.

“Even though they jumped on him and were on time with his stuff early, his composure throughout that game was incredibly impressive,” Vaughn said. “An immature guy lets that [first inning jam] turn into a three-spot, but he settled in and punched out those three.”

Burke takes that mature and positive mindset into all of his starts, knowing that he has a powerful offense — one that averages nearly eight runs per game — to support him.

“There’s never really any doubt in my mind that we’re not gonna have some runs, even if it doesn’t happen in the first couple of innings,” Burke said. “So it’s a comfortable feeling to know that.”

And that feeling is reciprocated by the rest of the team.

The Terps are confident in Burke’s ability to turn in a quality start each time he toes the rubber. And that confidence has materialized into an enhanced team bond, with wins following closely behind.

“Whenever he steps on the mound, the whole vibe of the team becomes different,” Costes said. “It’s like, ‘We’re about to win today.’”