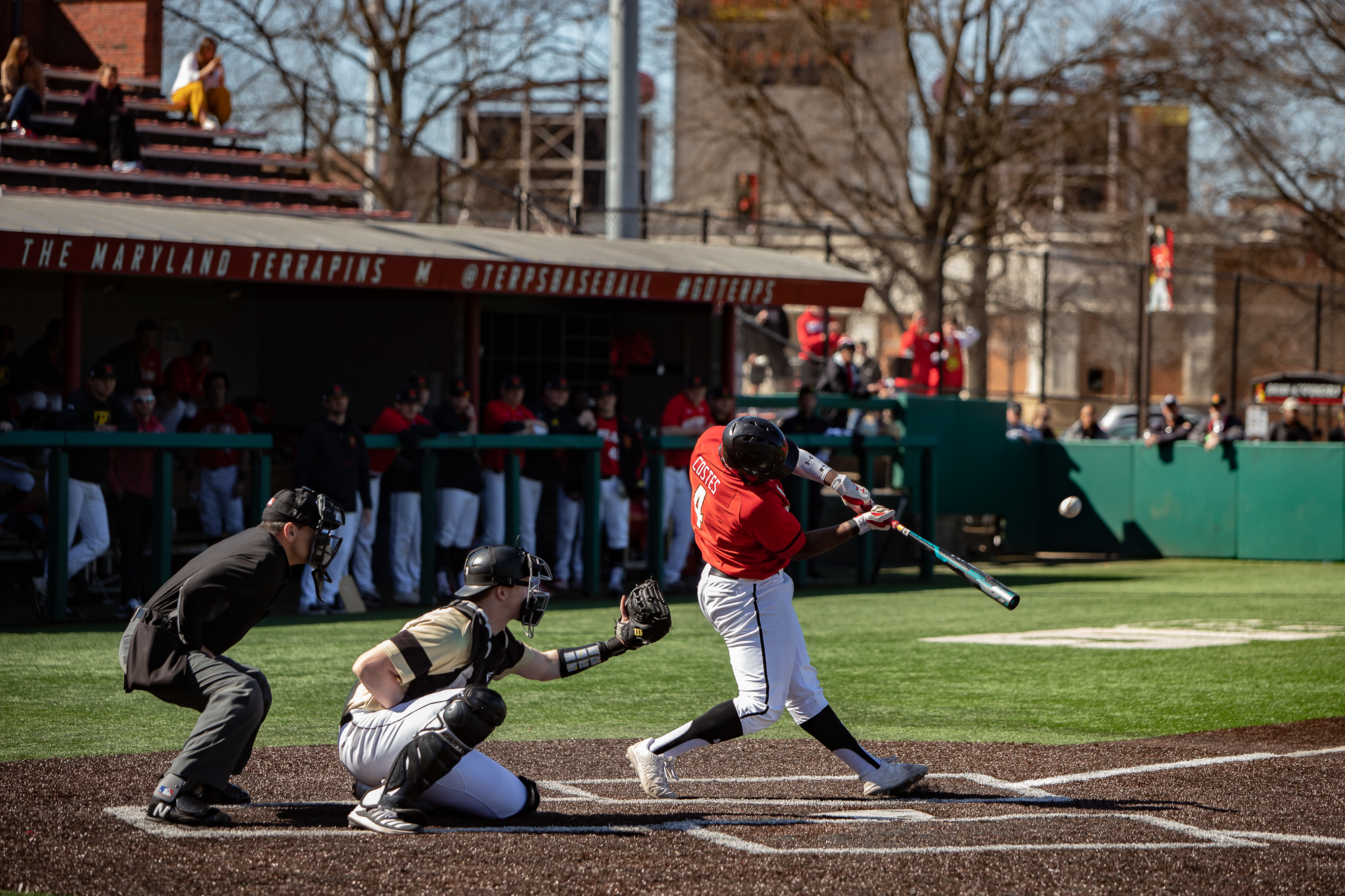 Sean Burke was running on fumes. The right-hander was set to throw his 114th pitch, a full count offering with two outs to Matt Woods in the sixth.

Burke powered through the fatigue, though, striking out Bryant’s first baseman on a fastball. He pumped his fist and returned to the dugout having completed six solid innings.

The redshirt freshman’s impressive outing backed Maryland baseball’s offense, which exploded for double-digit runs in a 13-3 win over the Bulldogs on Sunday to sweep the series in College Park.

“They had a good gameplan today,” coach Rob Vaughn said, “but his composure was unbelievable.”

Burke challenged Bryant (2-11) early, loading up the strike zone with his low-to-mid 90s fastball. The Bulldogs were prepared, though, as their first three batters reached on an error and two hits. The barrage was capped by second baseman Jake Gustin’s RBI double, which gave Bryant its first lead of the weekend and put two runners in scoring position with no outs.

But after a mound visit from pitching coach Corey Muscara, Burke settled down. He began mixing his pitches and struck out the next three batters to quell the early threat.

“The runs and hits already happened, so there’s not really much I can do about that,” Burke said.

And in the bottom of the first, Maryland’s bats picked up Burke. Bulldogs right-hander Will Treuel picked up two quick outs but hung a breaking ball to first baseman Maxwell Costes that the sophomore crushed over the left-field wall to tie the game. Two more runners reached, and catcher Tavan Shahidi put the Terps ahead with an RBI single to right field.

Bryant came right back in the second. First baseman Matt Woods worked a leadoff walk, and after stealing two bases, stood on third with two outs. Left fielder Derek Smith then sent a fly ball to left that carried just out of left fielder Tucker Flint’s reach for a game-tying RBI triple.

Controversy arose in the bottom of the frame. With one out, second baseman Austin Chavis sent a fly ball to deep left-center field. Smith appeared to track it down and make a terrific sliding grab, but Vaughn challenged that the ball hit the ground. The umpires convened and, after some deliberation, agreed, giving Chavis a double.

The Terps (10-4) would then take advantage. Chavis took third on a wild pitch and scored on right fielder Randy Bednar’s RBI groundout. Center fielder Chris Alleyne then scored on an error, giving Maryland a 4-2 lead.

Gustin responded for the Bulldogs in the third, clobbering the first pitch he saw over the right-center field wall to bring his team within one. But Burke recovered and struck out the next three batters to keep the Terps ahead.

Maryland restored its two-run lead in the bottom of the inning. Shortstop Ben Cowles stayed hot, picking up his 11th RBI on a double to left center that put the Terps ahead 5-3.

From there, Burke settled in. He worked a clean fourth, fifth and sixth innings, ending his outing by striking out Woods. The redshirt freshman finished strong, allowing two earned runs and five hits while striking out a career-high 11 and walking two in six innings.

Treuel, meanwhile, continued to struggle with his command. He was pulled in the fourth after plunking Flint for the third time on Sunday. In 3 ⅔ innings, the junior allowed four earned runs and four hits while striking out four and walking five.

And against Bryant’s bullpen in the fifth, Maryland extended its lead. The Terps loaded the bases for Bednar, who grounded into a fielder’s choice, allowing Maryland’s sixth run to score. On the next pitch, Costes doubled off the wall in center field, bringing home two more runs and putting the Terps up by five.

“I don’t feel any pressure to have to hit,” Costes said. “I feel like we have a complete lineup here, and if I don’t do it, somebody else can.”

Maryland extended its lead to nine with a four-run seventh inning, punctuated by a two-run single from Cowles and an RBI base knock from Chavis.

The Terps’ bullpen then shut down the Bulldogs. Sam Bello tossed a perfect seventh inning, while Mark DiLuia pitched a scoreless eighth, aided by Maryland’s third double play of the game.

The Terps took a double-digit lead in the eighth, and Mike Vasturia sealed the series sweep with a spotless ninth inning.

“The way our offense is, we’re never out of a game,” Costes said.