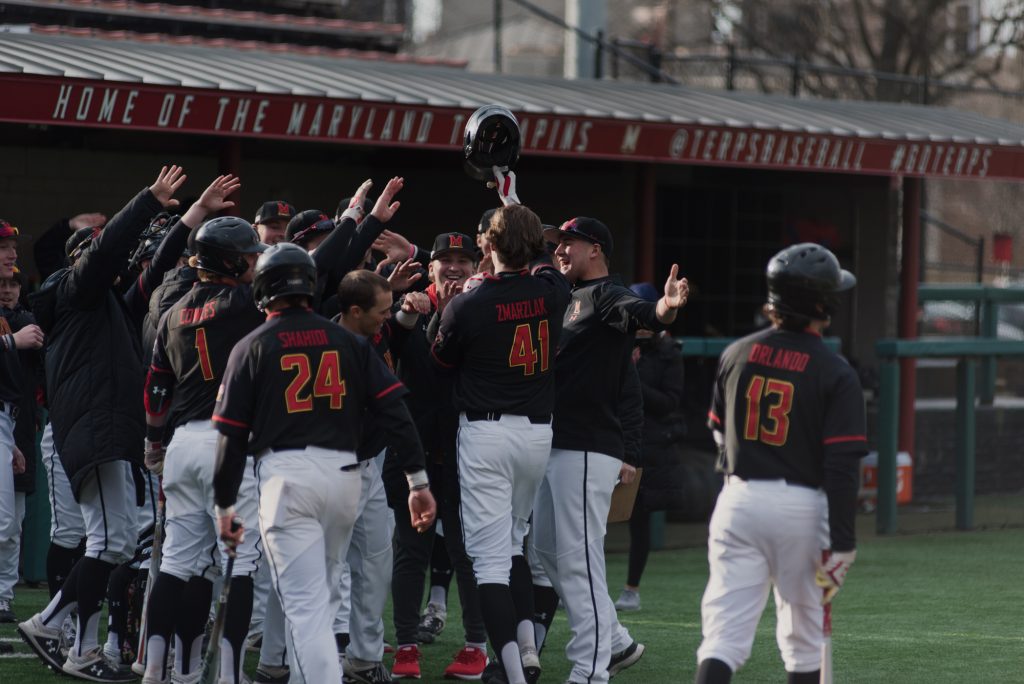 In the fourth inning, Bobby Zmarzlak stepped to the plate for one of the most pivotal at-bats of his young career. Maryland baseball loaded the bases with no outs, but the two hitters before Zmarzlak struck out.

When Zmarzlak saw a 1-1 fastball from right-hander Tyler Mattison, though, he wouldn’t whiff at a pitch as his two teammates had earlier. The freshman swung and clobbered it well over the high wall in center field, breaking open a close game. That swing was part of a breakout day for Zmarzlak, who entered Friday with just one hit.

[Read more: With 5-RBI day vs. Delaware, Ben Cowles broke out of season-opening slump for Maryland]

Terps left-hander Sean Fisher was dealing early on, striking out the side in the top of the first. And Maryland’s offense, coming off a 13-run performance against Delaware, went to work.

Alleyne led off with a double to left-center field, his eighth of the season, and scored one batter later after Randy Bednar singled and left fielder Matt Woods overthrew his cutoff man. Bednar advanced to third on the error, and on the next pitch, Maxwell Costes brought him home with an RBI single to center.

“I could’ve told you [Alleyne] was gonna be hooked in,” coach Rob Vaughn said. “When he goes backside double in the gap on the first swing, that’s a good sign for him. His swings were really good today.”

Tavan Shahidi then walked, and Zmarzlak padded the Terps’ lead. The designated hitter snuck a two-run homer just over the right-field wall, his first college blast.

With a four-run cushion, Fisher retook the mound. He worked a scoreless second but hit a bump in the third. Jake Gustin stroked a one-out RBI double to put Bryant (2-9) on the board, and the Bulldogs’ second baseman scored on Shane Kelly’s sacrifice fly.

Maryland looked to get right back in the bottom of the inning and quickly put two runners in scoring position. But Mattison buckled down, striking out the next three hitters to squash the threat.

[Read more: Maryland baseball bounces back with offensive showcase in 13-6 win over Delaware]

In the fourth, Fisher likewise stranded two runners in scoring position, once again turning it over to the Terps’ bats. This time, thanks to Zmarzlak, they came through.

Maryland loaded the bases, and with two outs, the freshman drove a fastball over the center field wall for his second home run of the afternoon.

“When we got runners in scoring position, instead of realizing we were in the driver’s seat, we got a little bit of pressure,” Vaughn said. “So Bobby’s one right there let us breathe a little bit.”

The longball put the Terps up 8-2, and though Mattison escaped the inning, the slam was the death knell in the junior right-hander’s day. In four innings, Mattison allowed eight earned runs and eight hits while striking out six and walking five.

With six runs of insurance, Fisher strolled out to the mound in the fifth. He surrendered a two-out solo home run to Kelly, but Maryland responded with a sacrifice fly from Costes in the bottom of the frame to restore the six-run advantage.

Fisher then tossed a clean sixth inning, ending his game after 99 pitches. The junior bounced back nicely from a disastrous start last week, allowing three earned runs and five hits in six innings while striking out a career-high eight batters and walking two.

“What I liked was that, while he had that [third inning] scuffle, when Bobby hit that homer, he settled right back in and went right back to work,” Vaughn said.

After a clean sixth inning, Bryant’s bullpen fell apart in the seventh. The Bulldogs loaded the bases with two outs and issued two walks and a hit batter to push the score to 12-3. On the game, Bryant’s pitchers walked 12 hitters.

Ben Cowles and Alleyne each jacked a solo home run of their own in the eighth to put the Terps up 11. Alleyne’s blast was his sixth hit of the game, tying a program record last achieved in 1995.

“I trusted my approach I’ve had all year, just see the ball up and hit it hard somewhere,” Alleyne said. “You can’t control it after it leaves your barrel.”

Right-hander Chris Chaney then closed out the game for Maryland, getting Sam Sinisgalli to ground out to punctuate a lopsided victory.