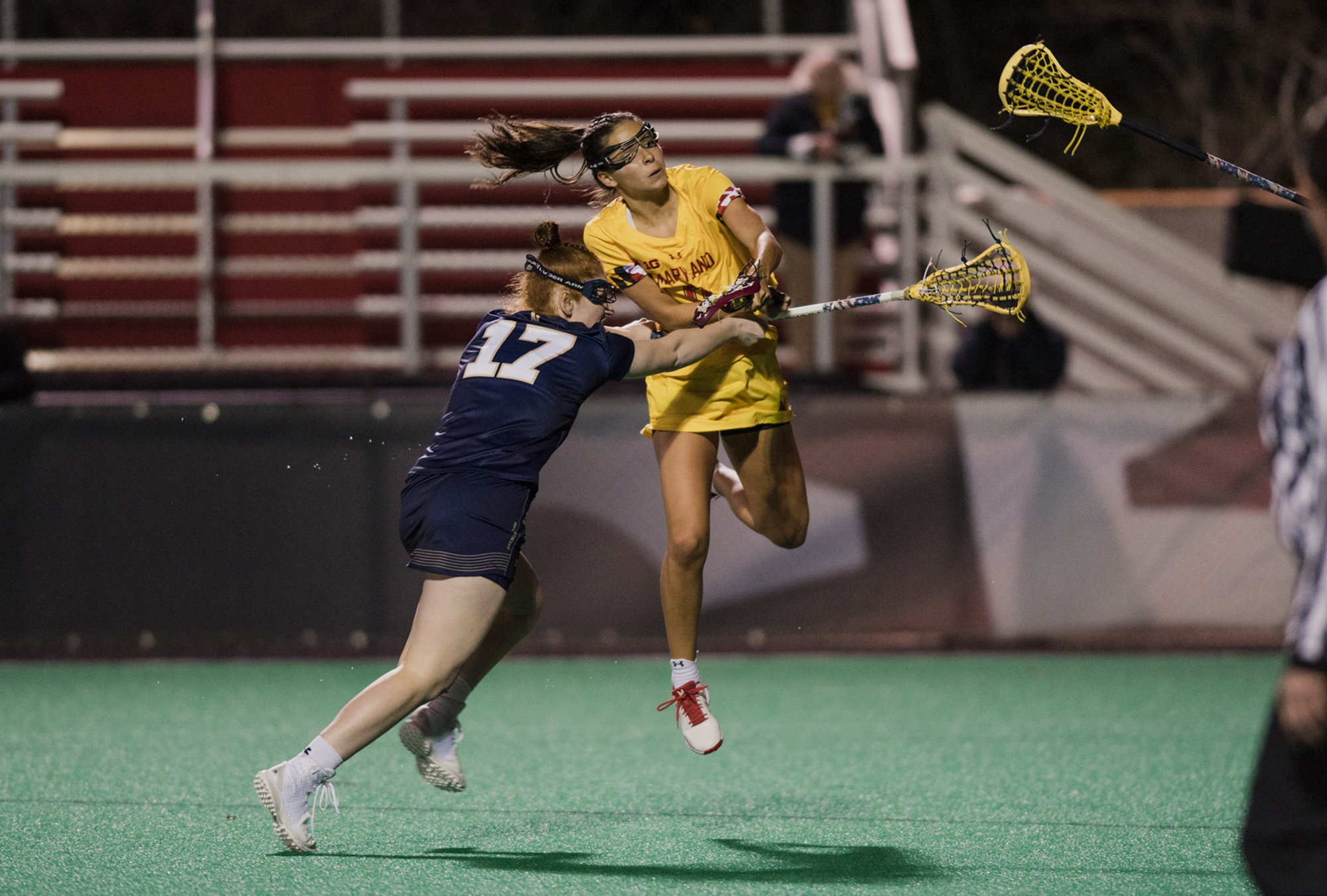 Attacker Libby May jumps into a shot during Maryland women's lacrosse's 16-7 win over Navy on March 4, 2020. (Gabby Baniqued/The Diamondback)

Maryland women’s lacrosse showed how it can blitz a team during the first half of Wednesday’s contest against No. 17 Navy. The Terps held an 11-1 lead at the break, their first halftime advantage since the season-opening game against George Mason.

However, the second 30 minutes of play was a different story. The Midshipmen gave Maryland a real challenge, converting attacking opportunities, causing chaos and playing with more physicality.

The Terps’ dominant first half performance was enough to break their three-game losing streak, but coach Cathy Reese is still looking for her squad to own both halves of a game.

“We kind of let them dictate the tempo with all that chaos,” defender Meghan Doherty said. “But then we took ourselves back and got back to playing Maryland lacrosse. That’s what we need to do, we can’t let anything outside get to us or get in our heads.”

In the first half, Maryland (2-3) seemingly did everything Reese had asked of her team up to that point. The Terps dominated all aspects of the game: shooting, draw controls and maintaining possession.

The offense put out the most goals in a single half for Maryland this season with 11. The key to their success was something Reese has been waiting for since game two: pressure.

“Our struggles in the past couple of weeks of not putting up many goals have been because we’ve been a little bit timid to go,” Reese said. “We wanted to see whatever combination we have out there, that we are attacking all the time and taking chances.”

One offensive aspect that improved for the Terps was free position shooting. Maryland hadn’t been converting its chances as well as it typically would. Reese said she wants the team to score at least 50 percent of their free position chances.

The Terps didn’t hit the 50 percent mark, going 4-for-11 that night. However, Maryland was able to convert three straight chances in the first half.

In the second half, the Terps took a step back. Navy gained more control of the matchup, grabbing an early goal and taking advantage of its chances in front of the net, and Maryland had significantly less possession as it struggled to be as quick to regain control after a missed shot.

“We did a really good job of that in the first half, that’s why I think we were able to hold them to one goal,” Reese said of second chances at goal. “That’s a tough task against Navy. … The second half we struggled a little bit with that. Navy got a couple of opportunities in a row.”

Early in the second half, the Terps defense committed two costly fouls, picking up yellow cards on both in what could’ve been a game-changing moment for the Midshipmen. Navy was called for a false start as play began, though, spoiling an opportunity and allowing the Terps to chew some of the clock while they were man-down.

Chaos continued as the Midshipmen picked up a yellow card of their own. Following the fouls, Navy scored two goals. However, one was offset by a goal from midfielder Kate Sites.

Intensity picked up again when Navy attacker Kelly Larkin scored late in the half, but Reese was quick to march on the field and have an exchange with the referees after they appeared to have missed a broken stick, which would immediately stop play.

Maryland was able to overcome what was a turbulent second half and win its second game of the season, 16-7.

The Terps will look to play the complete 60 minutes Reese is looking for when Hofstra travels to College Park on Saturday. It will be Maryland’s first unranked matchup since playing George Mason.

And now, since the Terps have kicked their losing streak, they say they’re poised to start getting more marks in the win column.

“I am so, so proud of everybody from tonight,” Griffin said. “There’s three losses, we learned from them and tonight we came out on fire. It felt so good to be back.”