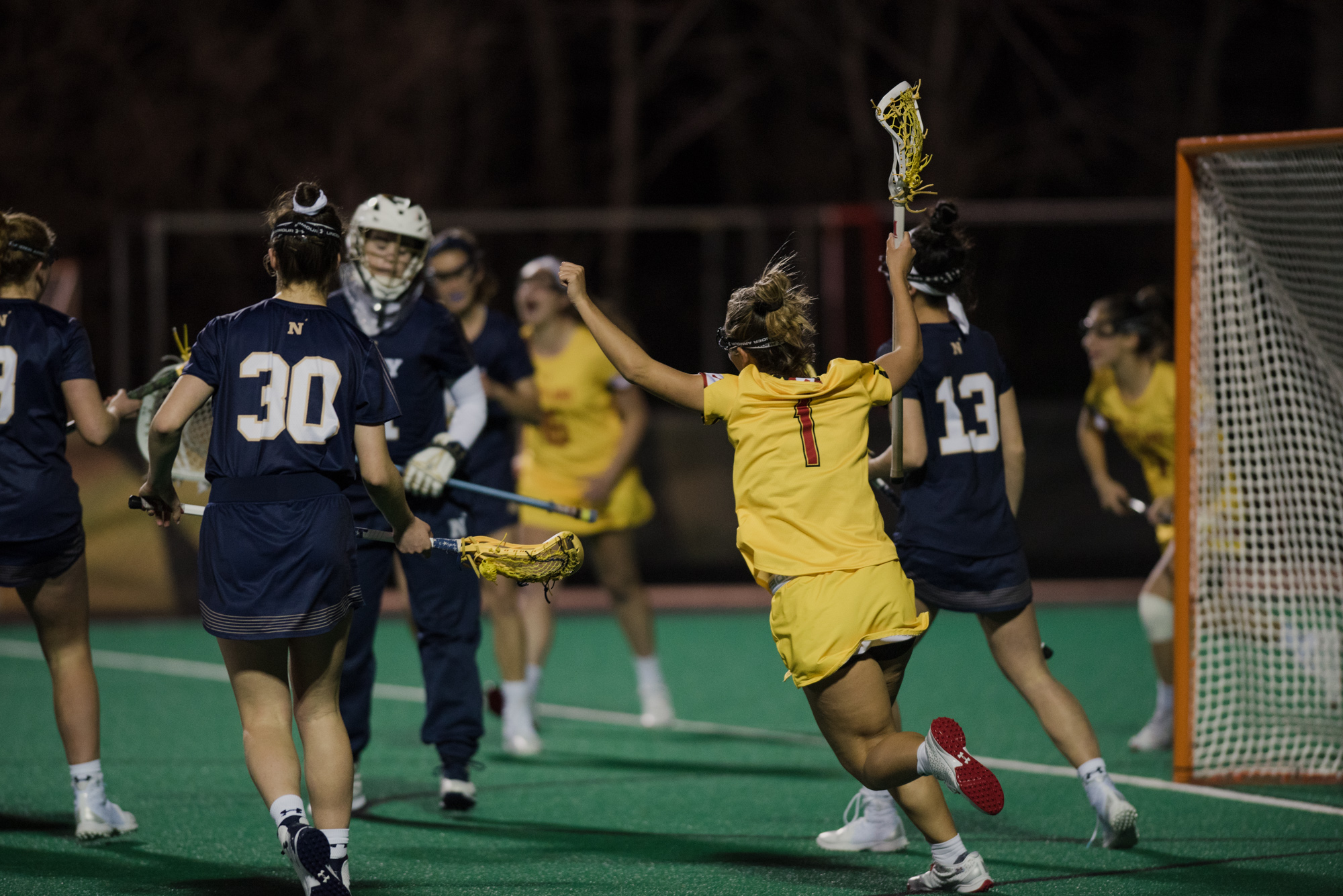 Maryland women’s lacrosse started on the backfoot against No. 17 Navy as the Midshipmen won the opening draw of the match and took it straight down the field scoring in the opening minute from in front of goal.

But while Navy owned the first minute of the half, Maryland owned the other 29.

The Terps went on an 11-0 run, going up 11-1 at the break and riding the commanding performance to a 16-7 win to snap a three-game losing streak.

“All over, our team really played well together and played for one another,” defender Meghan Doherty said. “It was really awesome to see that finally come together, connect on the offense and defensive side of the field.”

The Terps got hot, turning their next two draw controls into goals courtesy of midfielder Shaylan Ahearn and attacker Catie May, respectively.

“We weren’t caught back on our heels,” coach Cathy Reese said. “We were pushing the tempo of the game and that created a lot of offensive looks for us.”

The Midshipmen got the ball back following Maryland’s offensive onslaught, but the Terps’ compact defense forced a bad shot.

“The energy out there was very different in this game,” Griffin said. “Giving each other momentum … it was on our side the entire game.”

[Read more: “A total badass”: Despite loss, Maddie McSally showed out in net for Maryland lacrosse]

By the end of the first half, the Terps had converted three consecutive free-position shots — a feat they hadn’t accomplished this season. Free positions have been a sore spot for Maryland this year, scoring from only 36% of its free-position chances entering Wednesday’s matchup.

Navy had a chance to get one back in the closing seconds of the first half, earning two consecutive free-position shots. But goalkeeper Maddie McSally stood tall, saving both shots to keep Maryland’s advantage at 10.

“McSally played out of her mind again,” Doherty said. “She played crazy good on Saturday and then she steps out Wednesday night and absolutely dominates.”

The Midshipmen opened the second half with a quick goal, midfielder Natalie Irwin slotting past McSally from a free position. However, the Terp offense wouldn’t be quiet for long.

Hartshorn worked her way along the outside of the crease looking for a lane inside. She eventually found it, rocketing a shot past goalkeeper Abbi Young for her third goal.

About eight minutes into the second half, Maryland committed two costly fouls, picking up yellow cards on each. However, a false start from Navy on the restart gave the ball back to the Terps as they continued to dominate possession.

The Midshipmen would find two goals from midfielder Kayla Harris on a free position during the man-up play and a well-placed shot in the corner of the net in open play.

“Second half we just got a little sloppy,” Reese said. “There was a lot of emotion out there…we need to be more consistent than we were tonight.”

Midfielder Kate Sites pulled one back for the Terps, juking a Navy defender and winning the one-on-one with the goalkeeper.

The Midshipmen tried to make it back in the game with goals from attackers Ellie Lecker and Kelly Larkin, but goals down the stretch from Griffin, midfielders Darby Welsh and Brooke Robbins kept distance between the teams as Maryland closed out its second win of the season.