“A total badass”: Despite loss, Maddie McSally showed out in net for Maryland lacrosse 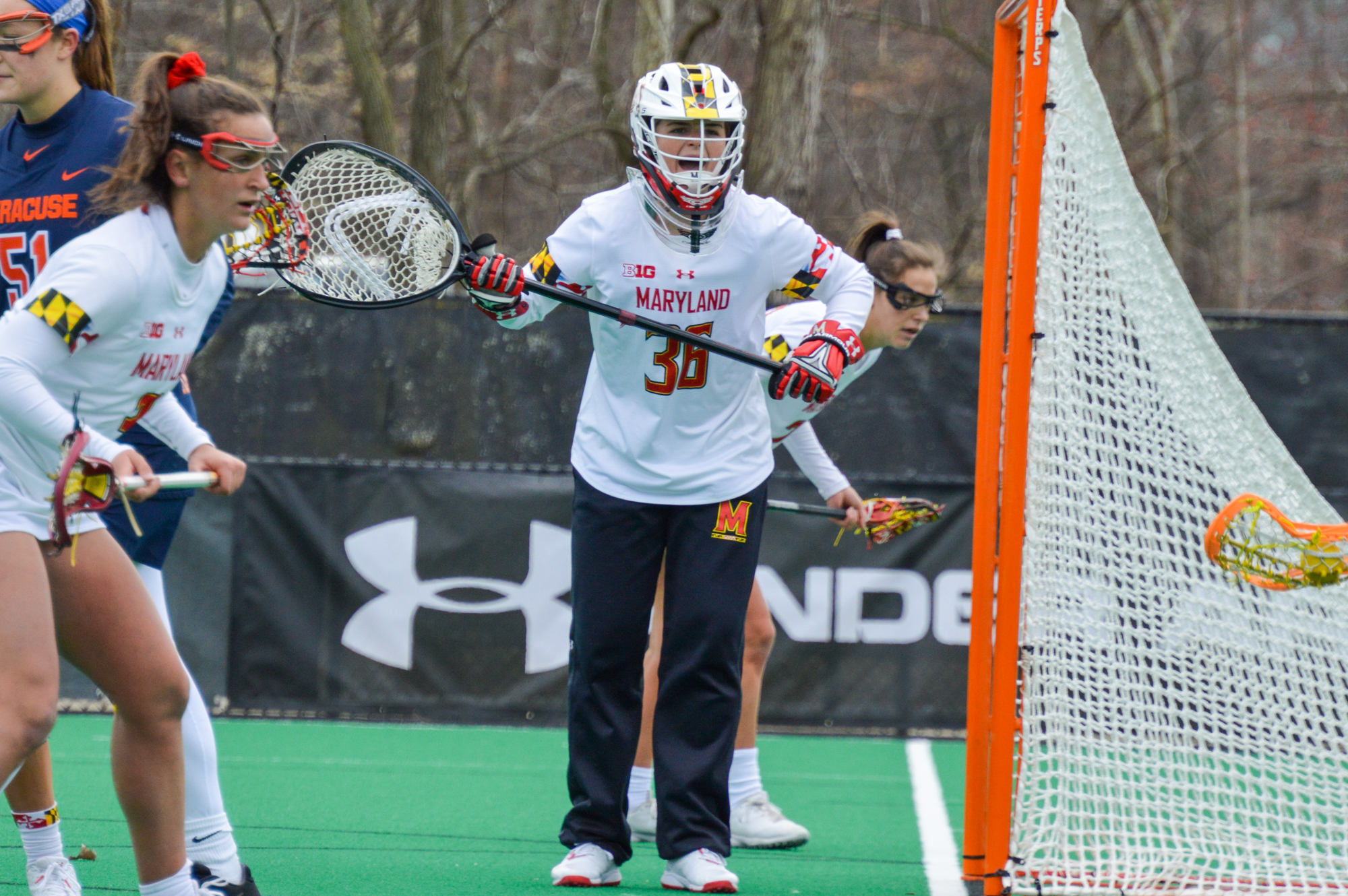 Goalie Maddie McSally makes a call-out during Maryland's 10-5 loss to Syracuse at the Field Hockey and Lacrosse Complex on Feb. 29, 2020. (Joe Ryan/The Diamondback)

Goalkeeper Maddie McSally smiled while recalling her performance for Maryland women’s lacrosse against No. 4 Syracuse on Saturday. She praised her teammates, and how a young defensive unit took big steps despite their defeat.

Then, the sophomore turned to her own play.

“Honestly, I just said I was a badass,” McSally said with a laugh.

McSally wasn’t the only one who believed her 13-save performance against one of the best scoring offenses in the country was remarkable.

“McSally being a badass? Did she say that? That makes me so happy,” captain Meghan Doherty said postgame. “She was on fire. She was a total badass.”

As the Terps (1-3) dropped their third game in a row, McSally still made her case to become the No. 1 goalie for Maryland during its title-defending season with a stellar performance.

Time in goal had been split through three games between McSally and freshman Emily Sterling — who appeared in the first three games, including a start against No. 1 North Carolina. Although McSally has a year of experience over Sterling, coach Cathy Reese said she sees a lot of potential in the freshman.

“You’re kind of waiting for something to step forward and clear it up,” coach Cathy Reese said last week of the battle for the top spot in net.

Reese said she’d planned to start Sterling against the Orange, too. But when gametime came, it was McSally between the pipes, and she made the most of it.

“It’s just exciting to get out there and have the opportunity to play with my defense in front of me,” McSally said. “We have a lot of fun out there.”

[Read more: Still without a clear No. 1 goalie, Maryland women’s lacrosse is confident in its options]

McSally was clinical in goal, particularly against free position shots. All of Syracuse’s free positions were on target, yet McSally saved four of the six attempts.

The Terps came back from a 4-0 deficit at halftime to bring the score to 5-4, down by a single goal for the first time since the 22-minute mark in the first half. However, midway through the second half, Maryland conceded a free position shot to Meaghan Tyrrell, who had already scored for the Orange.

McSally was one-on-one with Tyrrell as she charged toward goal, but the keeper remained unphased, tracking the shot to the bottom-right corner of the net and making a big save down the stretch for the Terps.

A career-high save total from McSally wasn’t enough to overcome the slow offensive play from Maryland against Syracuse’s physical defense. The Orange scored four straight goals to seal the match 10-5, with the nation’s leading goalscorer Emily Hawryschuk leading the way.

In the three-game skid for the Terps, Saturday’s performance was arguably the best defensively, between the play of McSally and a much-improved defensive unit spearheaded by Doherty.

“We saw glimpses of being awesome,” McSally said. “We definitely have it in us. We just gotta work on that confidence piece.”

Holding a top-10 scoring offense to four goals in one half along with causing 14 turnovers was a significant improvement from a defense that had just conceded 19 goals to North Carolina.

And it was McSally who played a large part in that improvement, turning aside 13 of the 23 shots on target she faced. While it wasn’t enough to spurn a losing streak, it’s the type of play the Terps need to get their season back on track.

“We need to step up,” Reese said. “With a team that’s got a lot of new people that hasn’t had much game experience, we need them to step up quickly.”