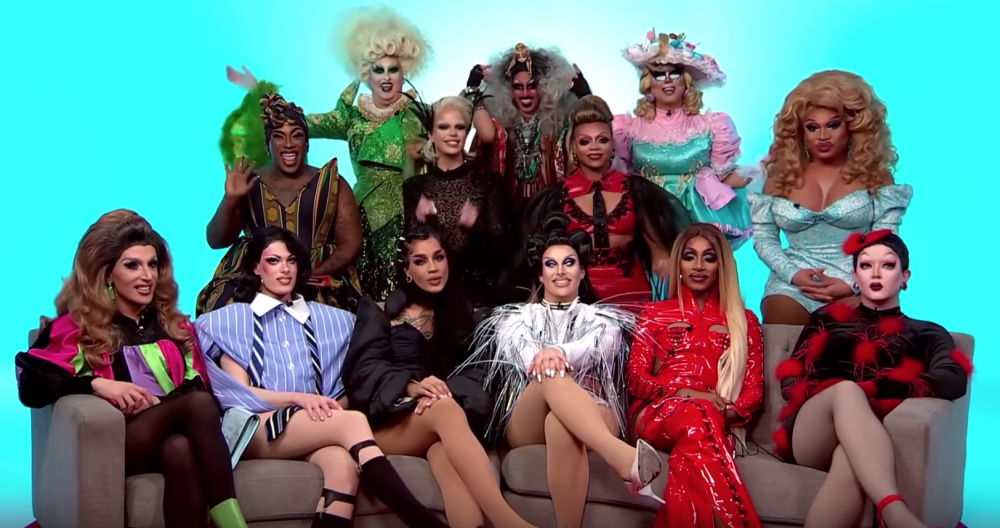 The cast of season 12 of RuPaul's Drag Race. (Photo via YouTube)

Season 12 of RuPaul’s Drag Race is out, and it’s more political than ever. Before the first six queens could even show off their stuff, Ru threw a few jabs at the current political climate.

“Looking for a new political party? Are you tired of politics as usual?” she asked as videos of President Donald Trump’s followers, signs supporting Brexit and towers puffing out pollution flashed across the screen. “Join the RuPaul’s drag race party!” she said before the first queen walked into the Werk Room.

This isn’t Ru’s first political rodeo. Outside of drag, he has been a gay rights activist for years and tries to incorporate that pride into challenges, like in season four, when the queens had to strut the runway in their very own pride parade-themed floats. Similarly, for the 50th anniversary of Stonewall, Ru got some of his all-star queens together for a pride flag photoshoot at the Stonewall Inn.

Since the 2016 election, he’s been outspoken about his dislike of Trump. He publicly endorsed Hillary Clinton and actively supports Democrats. In season 11, Ru had the contestants perform in “Trump: The Rusical,” a parody of Grease with Trump and all the women in his cabinet as the main characters, mostly to make fun of the current president.

[Read more: Review: Post Malone owned Capital One with nothing but himself and his music]

This year, the promotional photoshoot theme was red, white and blue, cluing us in to what would be the most politically driven season yet. Alexandria Ocasio-Cortez will be a guest judge, firing up the political angle even more. It’ll be interesting to see how this progresses as the season goes on and Election Day 2020 approaches.

Aside from all this, the queens themselves brought it to the runway for the premiere. They were absolutely excellent.

Each walked into the Werk Room with pizzazz coming out of her ears. They were all cinched for the gods, wearing something indicative of their personalities. Even the least creative of them, *cough* Heidi N Closet *cough*, brought something fun to the table — a hot pink, zebra blazer and matching mini skirt.

The mini-challenge this week required showing the judges two runway looks: one for the spring and one for the fall. Ru and the judges had few negative comments. But my least favorite looks came from Brita, due to her unoriginality. She strutted in two similar mermaid-style gowns, neither of which I could imagine seeing on the New York Fashion Week runway. She looked gorgeous, but when competing against fashion queens and creatives alike, you have to bring more to the table.

The main challenge was a doozy if you ask me. Each contestant had to write her own rap verse for the new song “I’m That Bitch.” They had to choreograph the entire number themselves and try to make sure they were in sync all while standing out to the judges. The real kicker, though, was that one of those judges was rap goddess Nicki Minaj.

The pressure was on but the girls totally nailed it. Even Nicky Doll, the worst performer of the group, was able to pull it together for her verse and entertain. Plus, her look definitely helped woo the judges.

The runway theme was sparkles, glitter and anything that shines. With the exception of Heidi again, each queen slayed this challenge, proving that the fashion girls would have to step up their performances if they wanted to really compete.

Ru definitely surprised the top two girls, Gigi Goode and Widow Von’Du, by waiting until the end to announce them safe. After an energy-packed lip sync to “Starships” by Nicki Minaj, Ru crowned Widow the winner. No queens were sent home this week, presumably so they can all compete against the second half of queens coming next week.

At the end of the episode, the queens danced around as usual, but this time they were holding a sign reading “Register to Vote vote.gov,” keeping with this season’s political undertone.

Only half of the contestants graced the runway this week, which means part two will premiere next week. We can only hope it’s filled with just as many fierce queens.