Review: iyla defied expectations with her music and honesty 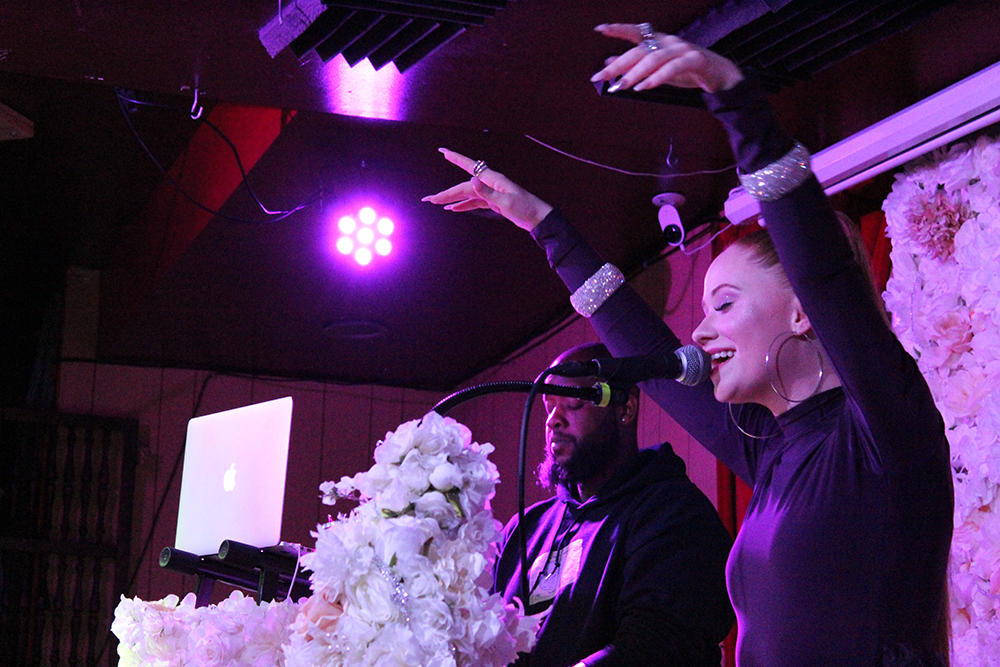 The light smell of sweat tinged with alcohol wafted through the air of the intimate Songbyrd basement. The dimly lit venue was filled to the brim with concertgoers smushed against one another, leaving them very little space to move their arms, stretch their legs or even rotate their bodies.

But the crowd was willing to sacrifice comfort for good music, and their eagerness for iyla to finally start performing was contagious. As I stepped into the steaming room, I cared less that my glasses were slowly fogging up and instead grew impatient for iyla to come onstage.

Center stage was decorated with white roses and flowers, adding an ethereal touch to the entire set. Around 9 p.m., iyla finally began her performance and was met with enthusiastic cheers and chants of approval from her local fans.

Her long, red hair was pulled up into an Ariana Grande-like high ponytail, and she was dressed in a purple leotard with a georgette-like half skirt on the bottom. She looked angelic, surrounded by a frame of flowers, and her skin glistened under the pink-hued stage lights. Her fans were glowing and smiling from excitement, and she too glowed from pure excitement and joy.

The 26-year-old budding R&B and soul singer-songwriter recently released her EP OTHER WAYS TO VENT. Friday night was iyla’s first time performing in Washington, D.C., and her devoted local fans pulled through to support her music at a sold-out show.

I took my spot in the front corner near the stage, and as I looked around, I was met with a sea of smiles. Some fans had their eyes closed and were just vibing to the music. Others had their phone lights on, and others were recording the performance, dancing and singing along to each and every song.

The crowd went wild during the performance of “Shampoo,” a jaunty ballad about bouncing back after breaking up with an undeserving person. iyla performed a solo dance routine on stage that earned her cheers and claps.

Fans got in their feels when iyla began singing the intro to “Bad Side,” a single off of her new EP. The song is soft and almost sweet, which contrasts with the lyrics about falling in love for the benefits instead of the consequences. The trailing oohs at the end of the song were sung by the crowd as iyla harmonized along, making the whole performance seem that much more intimate and pleasing.

After iyla concluded her set, fans enthusiastically beckoned for her to come back out and sing her most popular single. Unified chants of “Juice” rang throughout the venue and soon enough, she was back to perform the song, a peppy bop about unexpectedly falling in love. She even added her own twist to her song by remixing it with Lizzo’s hit “Juice” and “Juicy” by Doja Cat.

Watching iyla perform for the first time was enthralling and I was captivated by her singing prowess. Even though her set lasted an hour, it felt incredibly short.

At the end of the night, iyla made her message clear, encouraging her fans to embrace their individuality and be themselves unapologetically. She shared her experiences of being shunned by producers who believed she wasn’t meant to be an R&B or soul artist because of the way she looked.

But she kept dreaming, and her hard work routinely pays off as she performs to adoring crowds — so, there’s no doubt in my mind that her fan base will continue to grow.