I saw a NPR Tiny Desk concert, and now I can die happy 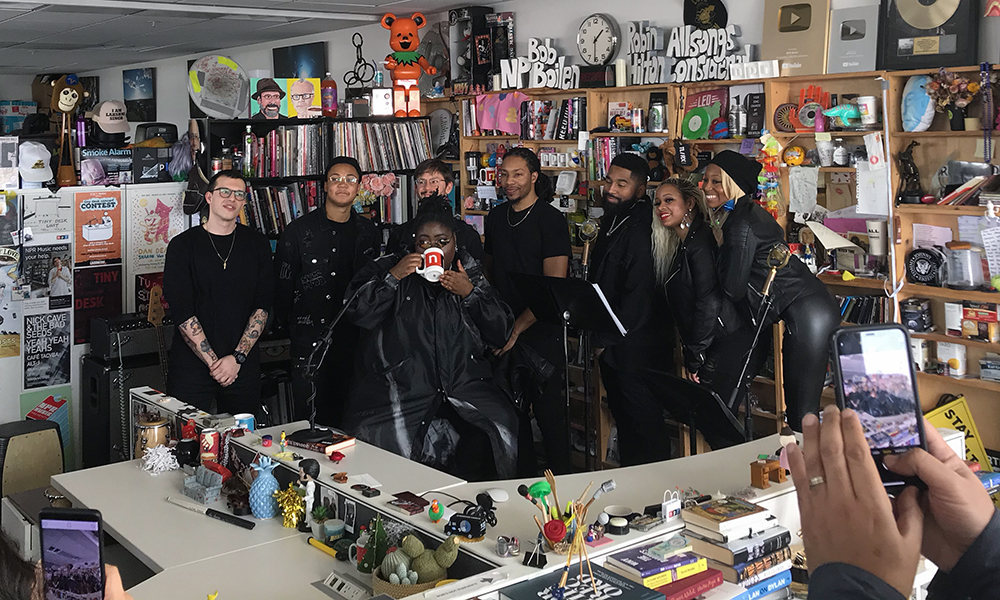 At the ripe old age of 20, I’ve officially peaked as a music journalist. I’m ready to pack it all in, bid my adieus and retire to the illustrious landscapes of upper Baltimore County, Maryland.

Now, you might ask, what exactly was my moment atop my inevitable career crest? Oh, no big deal, really. I merely attended a goddamn Tiny Desk Concert.

The NPR-produced concert series brings artists, both tall and small, to perform a handful of songs in its office. When I walked through the space, I didn’t notice the Tiny Desk until I had already walked past it, because it — quite literally — is just a tiny-ass desk, tucked in the middle of a room with an array of CDs, records and books on famous musicians lining the shelves.

Before the concert, I had the chance to speak with Bob Boilen, one of the creators of the concert series, who’s worked at NPR for almost 32 years.

Boilen detailed the beginnings of Tiny Desk, the name of which came from his old band Tiny Desk Unit. Accompanied by his NPR colleague Stephen Thompson, Boilen was at the 2008 SXSW music festival to see singer Laura Gibson. When the pair had trouble hearing her at the venue, they jokingly invited her to come perform in their office instead. A few weeks later, she did just that, performing in their office mere hours before she opened for The Decemberists.

“The thing about Tiny Desk is we try to get people to do something that’s a little out of their comfort zone,” Boilen said, “because when you do that, when you challenge an artist, you get something that you wouldn’t get otherwise, so it becomes memorable for us and memorable for them.”

At first, Boilen chose a lot of the artists to invite to the Desk, but now that more of his staff has artists to pitch, he has a rule: “You have to be passionate about the man to bring them here.”

Recent artists to grace the desk include famous pop artists Lizzo and Megan Thee Stallion. But Boilen, who hasn’t listened to music radio in 40 years, describes his personal music taste as “off the beaten path.” So, one of the most memorable desk performances for him was the dance-percussion trio Moon Hooch. Boilen enjoyed their 2014 performance enough to see them when they were in town this past Saturday at U Street Music Hall.

When I got to visit the Tiny Desk, Alabama rapper CHIKA was the performer of the day. I sat as she and her crew rolled into the room, watching as they and assorted NPR staffers and guests chatted during the soundcheck.

I’d never heard of the 22-year-old rapper before I saw her live, but now I can unabashedly call myself a fan of hers. Her flow was quick, nuanced and sharp, giving her the aura of someone quite mature for their age. Some of the songs she played were from her upcoming EP, which is planned to drop March 13. Few people had heard them, so performing them was “kinda gangsta” for her.

She also poked a smidge of fun at the tradition of performers bringing something with them to their Desk performance, by placing some chapstick on the front of the desk. The band and back-up singers accompanying her were people she’d worked with on the EP, and might I say, someone needs to put some respect on their checks because, oh my god, those singers could’ve been snatched right out of heaven for how angelic they sounded.

I do feel the need to disclose that the day after I visited NPR, Harry Styles did his own Tiny Desk performance. While I’m grateful to have been introduced to the goddess that is CHIKA, I can’t help but question why the universe is keeping me from my future husband for even longer.

As far as the future of Tiny Desk, they’re booked all the way through June and into July, Boilen said.

“I could never have predicted that this would be a destination for artists to come and to put their hearts into it,” he said.

And now, lesser-known artists have the chance to have a Tiny Desk concert of their own. NPR is having its sixth Tiny Desk Contest, which gives pretty much anyone the chance to jumpstart their career with one of the most sought-after gigs in the industry. And although only one in about 7,000 entrants will end up getting this opportunity, it means more than that, Boilen said.

“It’s not about winning,” he said. “As an artist, it’s good to have markers in your career, like where are you? And this Tiny Desk Concert is a really good place to do that. You will gather your friends, you will find a videographer maybe, and capture a moment in the history of your life, and that’s a beautiful thing to do.”

So hopefully, someone reading this can be the next contest winner. But in the meantime, I’ll be off in my rural retirement, blasting the new CHIKA EP when it drops, yearning for NPR to rope me out of my said retirement with a job offer and peeking hopefully out the window for my knight in pastel armor, Harry Styles, to one day come for me.