Review: ‘Noises Off’ finds the funny in faulty theatre 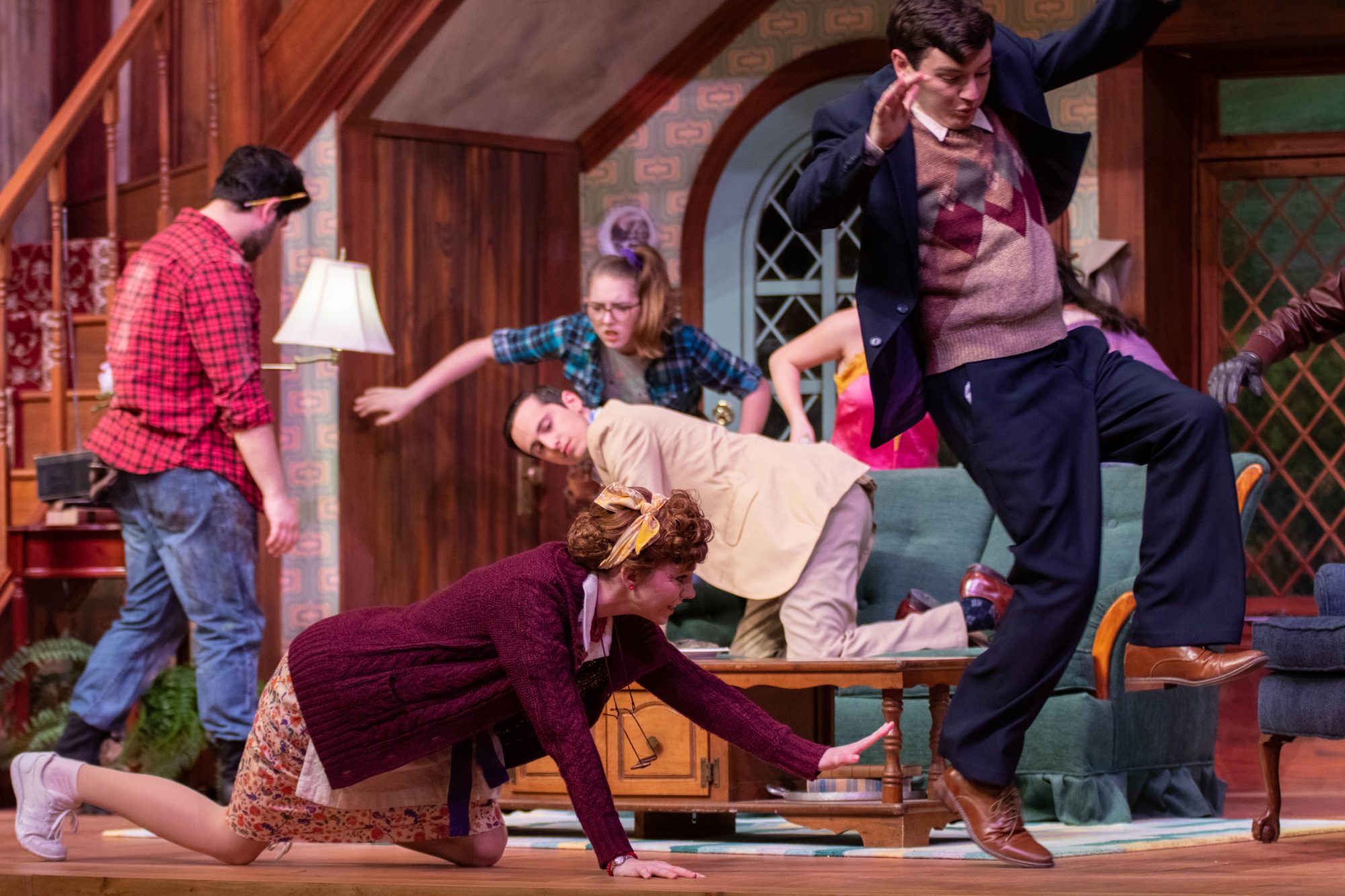 University of Maryland students perform in a production of 'Noises Off' in Kay Theatre. (Julia Nikhinson/The Diamondback)

The chaotic nature of live theater is alive and well in Noises Off, the new production at The Clarice Smith Performing Arts Center.

Noises Off finds hapless director Lloyd Dallas (Kyle Starling) attempting to get his show-within-the-show, Nothing On, ready the night before opening. Each actor has their own hang-ups that keep halting the show’s progress, including Garry’s (Ben Fish) inability to articulate words, Selsdon’s (Sam Intrater) aversion to sobriety and Brooke’s (Chloé Costello) constant loss of her contact lenses.

Over three acts, everything that could possibly go wrong with Nothing On does. From feuding actors and backstage drama to mishandled fish props and fainting spells, the mistakes pile up until the entire show unravels into a hilarious mess of jealousy and incompetence. While the show-within-the-show plays like amateur hour, the actual show is handled with the preciseness of seasoned professionals.

Any theater kid knows that a show is awful at the start of tech week and somehow miraculously comes together by the time the curtain rises for the first performance. Noises Off boldly asks the question “What happens if nothing came together by opening?” Every missed cue, flubbed line and wardrobe malfunction is fodder for laughs.

During the second act, the entire set rotates 180 degrees and the audience watches as the production devolves into slapstick-fueled mania, reminiscent of old silent movies and Hanna-Barbera cartoons.

The coordination of the actors is the most impressive aspect of the production, as they rush in and out of doors like a Scooby-Doo cartoon. Starling’s ability to traverse the entirety of the Kay Theatre plays like a magic trick: He starts the show in the balcony before suddenly appearing in the orchestra section 10 seconds later, bouncing back and forth with lightning speed, always ready to critique his actors to comically insulting lows.

The slapstick and quick movements of the cast are heightened by the performances, which feel appropriately exaggerated in this farce that lampoons the seriousness of the stage. By the time Nothing On has reached its final performance, each character is playing in their own warped version of the show. The end of the show has one character inexplicably performed by three people at once.

It’s the small details of the production, though, that make Noises Off so much fun. Intrater sleeps by the front of the house when the audience walks in pre-show, and his first appearance comes while the entire cast is trying to find where his character was taking a nap. The actors that play members of the stage crew are still working as the lights dim, catching them by surprise. Director Lisa Nathans expertly mixes comedy, absurdity and anxiety into a production that holds together like glue, even as all of its contents purposely fall apart.

Every aspect of Noises Off plays directly into theater geekdom, with showmances that fall apart right before the opening night performance, meta jokes about the lack of attendance at matinee shows — which killed with the matinee audiences — and confusion over proper theatrical terms.

The good news is it doesn’t take a love of theater to appreciate the superb physical comedy and rapid-fire jokes of Noises Off. With killer direction and committed performances, Noises Off finds the hilarity in even the most ill-advised plays.

The creators of ‘Maryland Tonight’ are producing a Hanukkah special