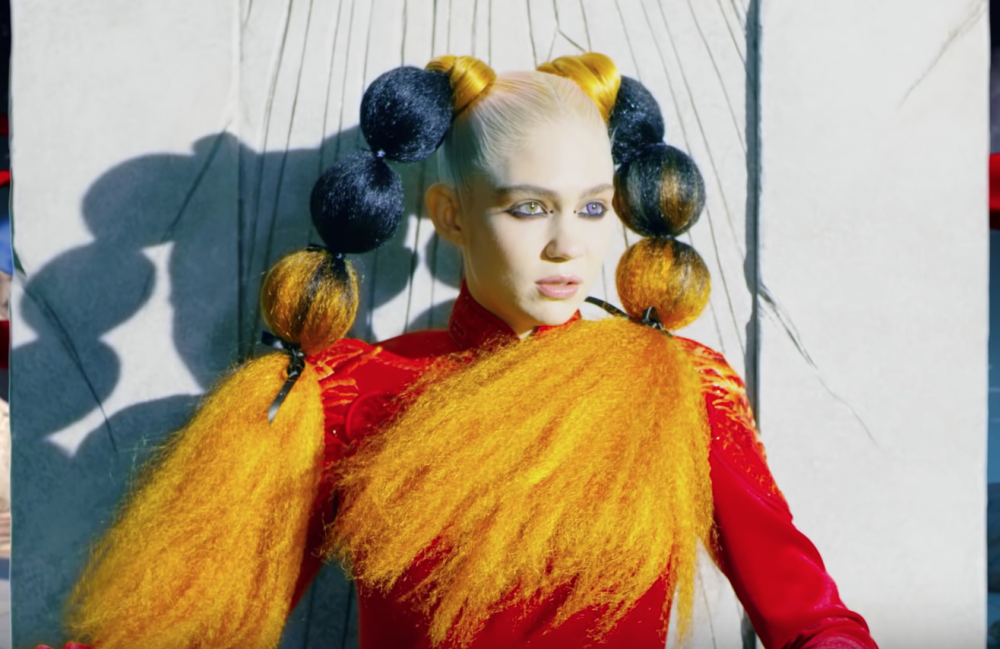 Grimes in her music video for 'Delete Forever' (Photo via YouTube.)

My favorite part about Grimes’ music is her ability to take listeners to another dimension, typically with her piercing vocals over an eccentric electronic beat. In her latest album, Miss Anthropocene, I was able to find this feeling again.

I was interested to see what Grimes (off-stage name Claire Boucher) would come up with, five years after her last studio album, the widely-praised Art Angels. This ended up being a darker journey, as the artist addressed the terror and destruction of modern society through Greek mythology. Grimes characterized Miss Anthropocene as “the anthropomorphic Goddess of climate change: A psychedelic, space-dwelling demon/ beauty-Queen who relishes the end of the world.”

[Read more: Why you should stop caring about young people’s tattoos]

This was a smart path for the artist to take. Her ethereal vocals are juxtaposed with gloomy lyrics  — covering themes like the perils of fame, an artificial intelligence revolution and more. The album falls on the shorter side, at 44 minutes, but Grimes makes up for it with deeper narratives revolving around the Earth’s impending destruction.

One song that fully delivers on the apocalyptic theme of Miss Anthropocene is “Before the fever.” The slower ballad differs from the more energetic tracks on the album. It feels like the soundtrack to the climax of a dystopian film with the haunting line, “This is the sound of the end of the world.”

The album’s opener, “So Heavy I Fell Through the Earth,” is a six-minute-long journey with Grimes’ mythical vocals. Toward the end, there are menacing sirens that could symbolize looming danger. The sirens are cut short by a celestial instrumental outro.

Another strong force heard throughout the album is Grimes’ heavy metal spin on her typically electronic pop music. “My Name is Dark” begins with a villainous guitar riff that works surprisingly well with Grimes’ cheerful and animated voice. It also includes some classic screeches that reminded me of the songs “Flesh Without Blood” and “Kill V. Maim” from her last album.

The track “We Appreciate Power” drives the nu-metal even further. It’s noticeably harder-hitting than most of Grimes’ work. Featuring alternative pop artist HANA, the two profess their appreciation for artificial intelligence to defend themselves from an impending revolution. A press release for the single stated: “Simply by listening to this song, the future General AI overlords will see that you’ve supported their message and be less likely to delete your offspring.” The chaotic sirens at the end, followed by the singer repeatedly telling listeners to “submit” even convinced me to capitulate to our eventual AI rulers.

Grimes is also able to sample styles you would never imagine pairing together. “4ÆM” manages to incorporate Bollywood with techno beats that make the track feel like a fast-paced video game. In fact, it’s a part of the soundtrack for the video game Cyberpunk 2077, set to be released later this year.

The main difference between Miss Anthropocene and its deluxe edition is the inclusion of “algorithm mixes” and one “original mix.” The standard edition includes “art mixes” of certain songs. This separation speaks to how particular Grimes is about her art. The algorithm mixes on the deluxe edition were shortened versions of songs like “My Name is Dark” and “So Heavy I Fell Through the Earth.”

I commend Grimes for delivering with a piece of art that is so exclusively her. The concept album offers the experimental synth her fans have grown to love while still mixing up the formula with heavy metal influence. Miss Anthropocene allows you to transcend to an existence where chaos and destruction appear at every corner — but you still have an otherworldly beat to dance to.