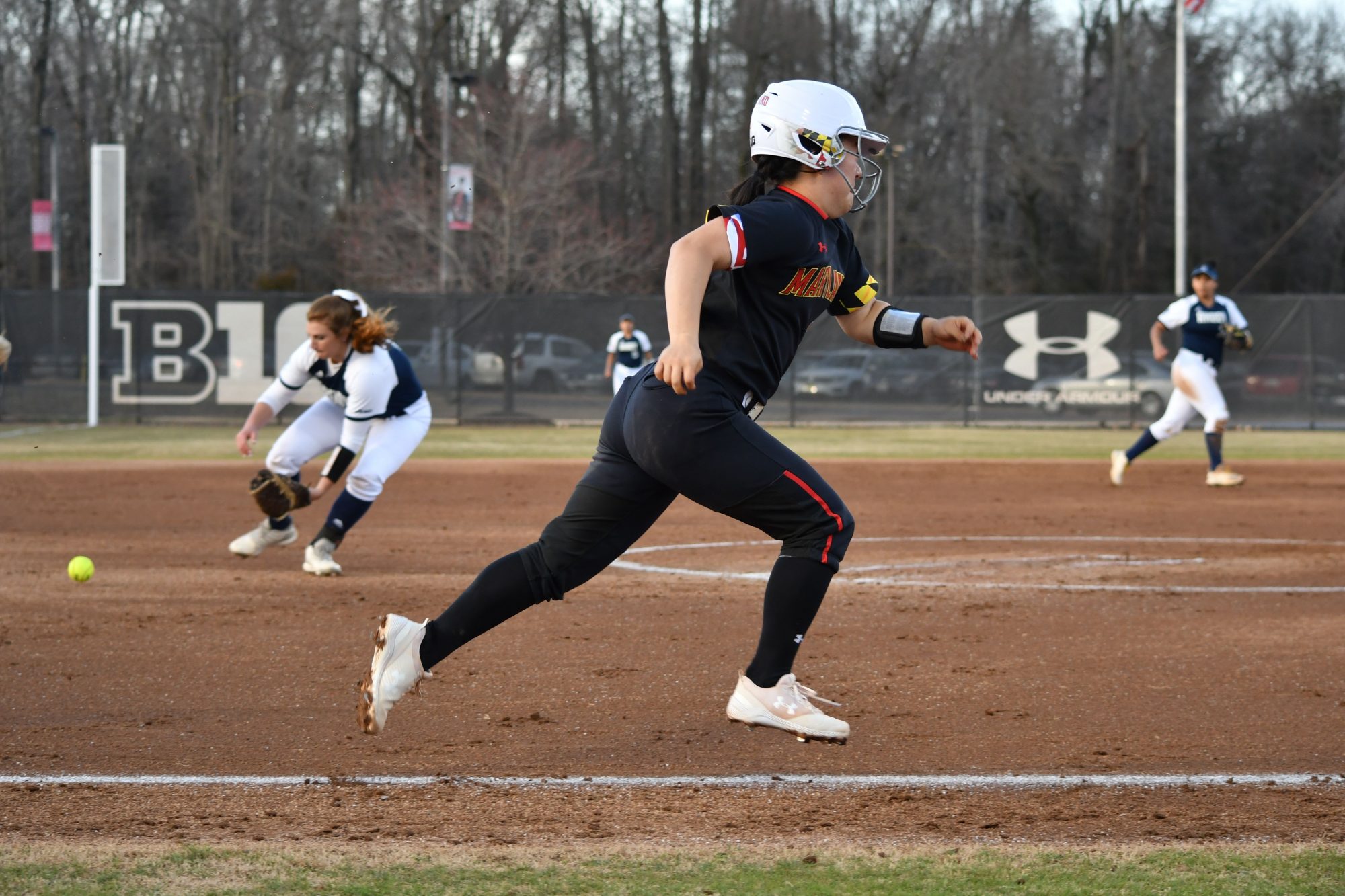 Second baseman Taylor Okada runs toward first base after putting the ball in play during Maryland's 6-4 win over Rhode Island at Maryland Softball Stadium on March 14, 2019. (Alex Chen/The Diamondback)

Following an 8-0 loss to Arizona State on Friday, Maryland softball seemed to have gotten into its groove the rest of the weekend with three wins — two against Southern Utah and one against Big Ten foe Wisconsin.

But a rematch with the Sun Devils on Sunday proved all too familiar, as they took a 16-2 mercy-rule win over the Terps to close the Sun Devil Classic.

To start off Sunday’s game against the Sun Devils, Regan Kerr singled out to left center. Taylor Okada struck out and Anna Kufta followed with a single, leaving two runners on base with one out. But infielder Taylor Liguori then popped up to Arizona State infielder Alynah Torres, who threw it to second basemen Bella Loomis for an inning-ending double play.

With Trinity Schlotterbeck in the circle for Maryland, Kindra Hackbarth and Loomis made it onto base. Torres then grounded out to second and Hackbarth ran home, scoring the first run of the game. Maddi Hackbarth followed with a double and eventually stole home. The Sun Devils left the first inning up 2-0.

Following a scoreless second inning for the Terps, the Sun Devils built on their edge. With infielder Kiara Kennedy and outfielder Makenna Harper on base, Kindra Hackbarth came in hitting an RBI double, boosting the score 4-0. Maryland was then forced to have a pitching change, with Courtney Wyche coming in for Schlotterbeck. Wyche gave up a sacrifice fly to Maddi Hackbarth to make it 5-0.

The Terps were unable to get any runners on base in the third inning, Arizona State’s bats stayed hot. With Savannah Morales and Kennedy on base, Harper came up to the plate and hit the ball out to right field. Morales advanced home, making the score 6-0. Loomis continued the onslaught, reaching on an error that scored two more runs.

With another hit from outfielder Jazmine Hill and a two-run home run by Torres, Maryland made another pitching change. Wyche was replaced by Kiana Carr, who forced a pop up to Okada at second. Still, the Sun Devils did major damage, coming out of the third frame with an 11-0 lead.

In the bottom of the fourth, the Sun Devils teed off on Maryland’s pitching. A monumental inning left two players with their first collegiate home runs — Jordyn Vanhook homered out to center field, followed by a two-run blast from Hill. Lindsay Lopez continued Arizona State’s hitting spree with a two-run homer. The Sun Devils left the inning with a gaping 16-0 lead.

Trailing significantly in the fifth, the Terps tried to prevent the game from ending by mercy-rule. Campbell Kline singled out to second base and Taylor Wilson advanced to third. Kerr followed with a single to shortstop to load the bases. Okada tried to keep the Terps alive with a hit into center, which brought Kline and Wilson home for Maryland’s first runs of the game. But Kufta came up to bat with two outs and grounded out to shortstop, leaving the Sun Devils to tag out Okada at second.

With only six hits in five innings, the Terps were handed their second loss of the weekend to the Arizona State in another mercy-rule affair.