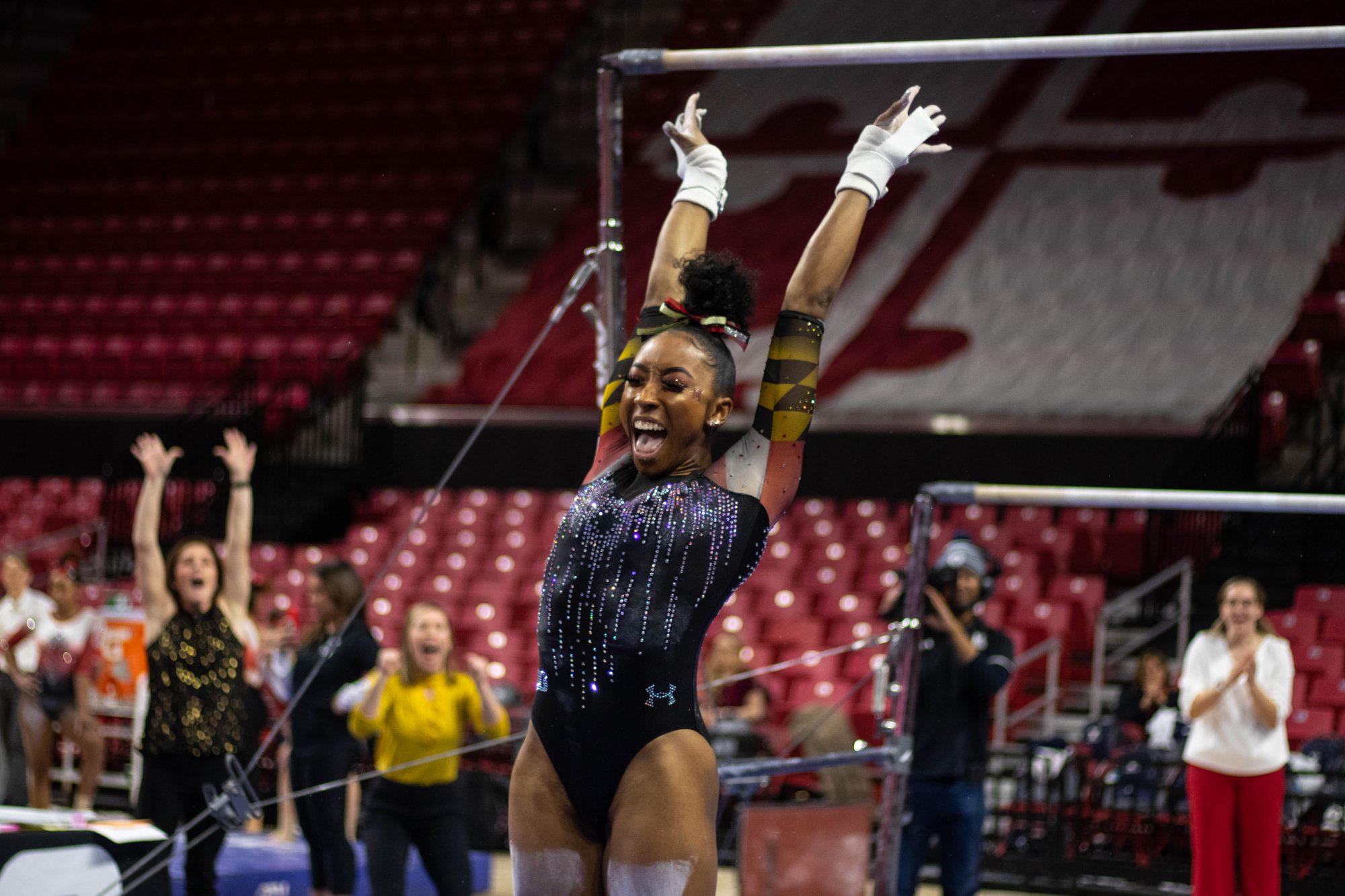 Seated at the east end of the Xfinity Center, the floor judge dialed a pair of nines into the score sign, signaling that Maryland gymnastics freshman Reese McClure had earned a 9.900 for her floor routine — her second such score of the afternoon.

Once revealed, the score was welcomed with a series of claps from coach Brett Nelligan, a common sight throughout Sunday’s meet.

And while Maryland hadn’t surpassed 196.000 since Jan. 19 against Iowa, McClure’s effort helped propel her team far past that barrier in the Terrapin Invitational on Sunday. The team scored above 49.000 in each of its four events en route to a season-high 196.975 score on Senior Day.

“There’s always something special about Senior Night,” Nelligan said. “I’m just glad that we could have a night that our seniors could remember forever, and it was a team effort to make that possible.”

[Read more: Maryland gymnastics will look for the energy from Senior Night to provide an extra boost]

The Terps began the afternoon on a bye, so they were forced to wait more than 30 minutes before taking the mat. They had success out of their bye in last weekend’s meet, with a season-high 49.300 on floor.

This time around, Nelligan’s squad opened on vault. Though the team has struggled in the first rotation this year, freshman Reese McClure did her best to prevent that. The freshman stuck a 9.900 at the top of the rotation, and she ran to her teammates to celebrate while pounding her chest.

Maryland exited its first rotation with a 49.225, which was the highest score of any team in the first two rotations. Junior Collea Burgess also made her season debut on vault, earning a 9.825.

“We needed to start like that from the beginning,” Nelligan said. “We made it a big point to make sure that we did that, and the results followed.”

In the third rotation on the uneven bars, the Terps took their momentum from vault. The highlight of the event was the third and fourth slots, where sophomore Sanya Glauber and senior Tiara Wright posted back-to-back career-highs — a 9.925 and a 9.950, respectively.

None of the six Terps had a single slip-up on the bars, which helped them to the best bars score in program history, a 49.425. They left the rotation primed to outscore their opponents by a significant margin.

“We know that we can get great scores and we can do great things as a team,” senior Alecia Farina said, “especially if we’re positive and having fun.”

But balance beam, Maryland’s next rotation, had given the team troubles all season as its lowest-scoring event. Maryland still performed well in its worst event, earning a team score of 49.050. Wright capped off the rotation with a perfect backflip dismount, which helped her to a 9.775.

The Terps entered the final rotation with a chance to score above 197.000 for the first time in Nelligan’s coaching tenure. The team needed a 49.300 or higher in the final event, and it came close with a 49.275.

The team still left the Xfinity Center with a big boost of confidence, now with just four meets remaining before the Big Ten Championships.

“I think that this is a great confidence booster,” Wright said. “We knew that we were capable of it, so it finally happening shows us exactly what we are made of.”