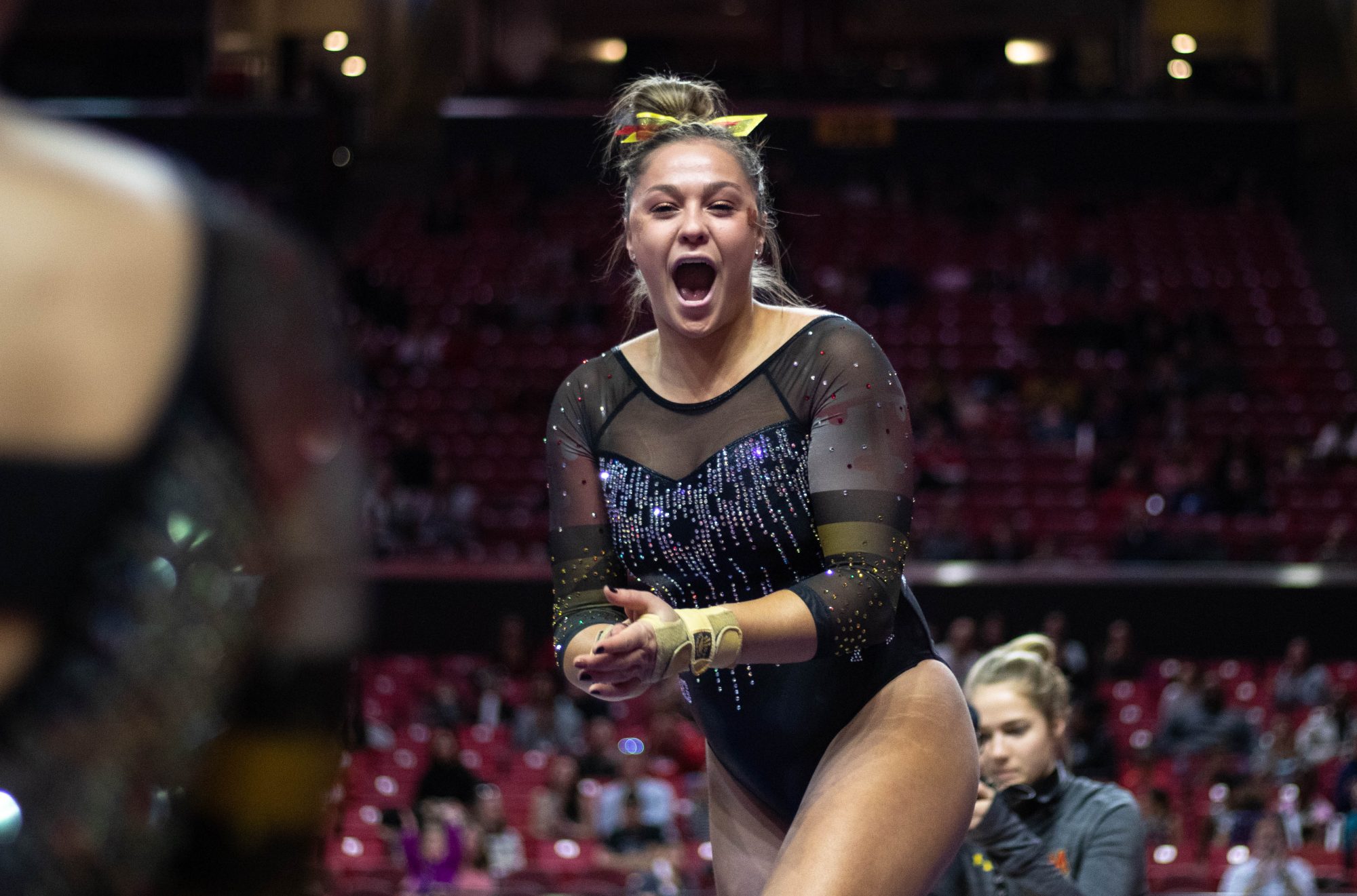 As Maryland gymnastics coach Brett Nelligan likes to remind people, a small misstep during a routine can have big implications in the scores. Likewise, a small difference in scores can decide who moves on and who goes home during the NCAA championships.

With the postseason quickly approaching, the Terps are in crunch time to clean up those small miscues, and the team will have some added help this weekend as it returns home to the Xfinity Center.

Maryland has averaged a 195.783 score this season at home, compared to its 195.075 mark on the road. So as they honor their seniors Sunday, the Terps are looking to use the home energy to set up a strong end to their season.

“We’re excited about Senior Night, we’re excited to be home again and we’re ready to have a great meet,” Nelligan said. “We love our arena, we love our fans, and then Senior Night is always special. I always tell the team the same thing every year: Senior Night has a lot of emotion, and instead of trying to hold it back, I want them to compete with it.”

The program will recognize its four graduating seniors — Alecia Farina, Emma Johnson, Kirsten Peterman and Tiara Wright — before the meet. The emotions stemming from the night may be hard to contain, but Nelligan said he hopes they will yield positive results.

The Terps will also have some added time to settle in after the pre-meet ceremonies because they’ll begin on a bye. Then, they will compete for four consecutive rotations.

Last weekend, Maryland had a bye for the second rotation, and it put together two-straight rotations above 49.000 out of the break. The gymnasts hope to get the crowd engaged as they start on their first event.

“Coming out of the bye, we’re really pumped up,” freshman Emma Silberman said, “so hopefully it will help us like be ready for every single event this weekend.”

Sunday will also mark the first time this season the Terps welcome more than one opponent into the Xfinity Center. With Temple, Penn, Yale, William & Mary and Maryland all on the floor at once, it’s bound to be a fast-paced atmosphere.

“I think it’s going to be great especially because there are five teams here, so there’s going to be gymnastics everywhere,” Silberman said. “I’m not going to want to look away, especially when we come back out on the floor after our bye. The last four rotations are going to be awesome.”

Once Nelligan’s squad comes out of the tunnel, the crowd won’t help the team with every aspect of its routines.

That’s why Maryland has a collective attitude that they’ll rely on during Sunday’s meet. The Terps are coming off back-to-back scores on the road above 195.000, where they employed the same mentality.

“We always talk about just doing our job, and taking the meet slow and going one routine at a time,” Nelligan said. “And then good things always follow when you do that.”

With more than half of the regular season in the books, Nelligan doesn’t tinker much with his lineups anymore. And Maryland is fired up about competing in the arena where it has had the most success this season, with the added fanfare of Senior Night.

“It should be really fun especially because it’s Senior Night,” junior Sabriyya Rouse said. “Senior Night usually has so much energy, and everyone’s just happy and in a good mood. Should be a really fun meet.”