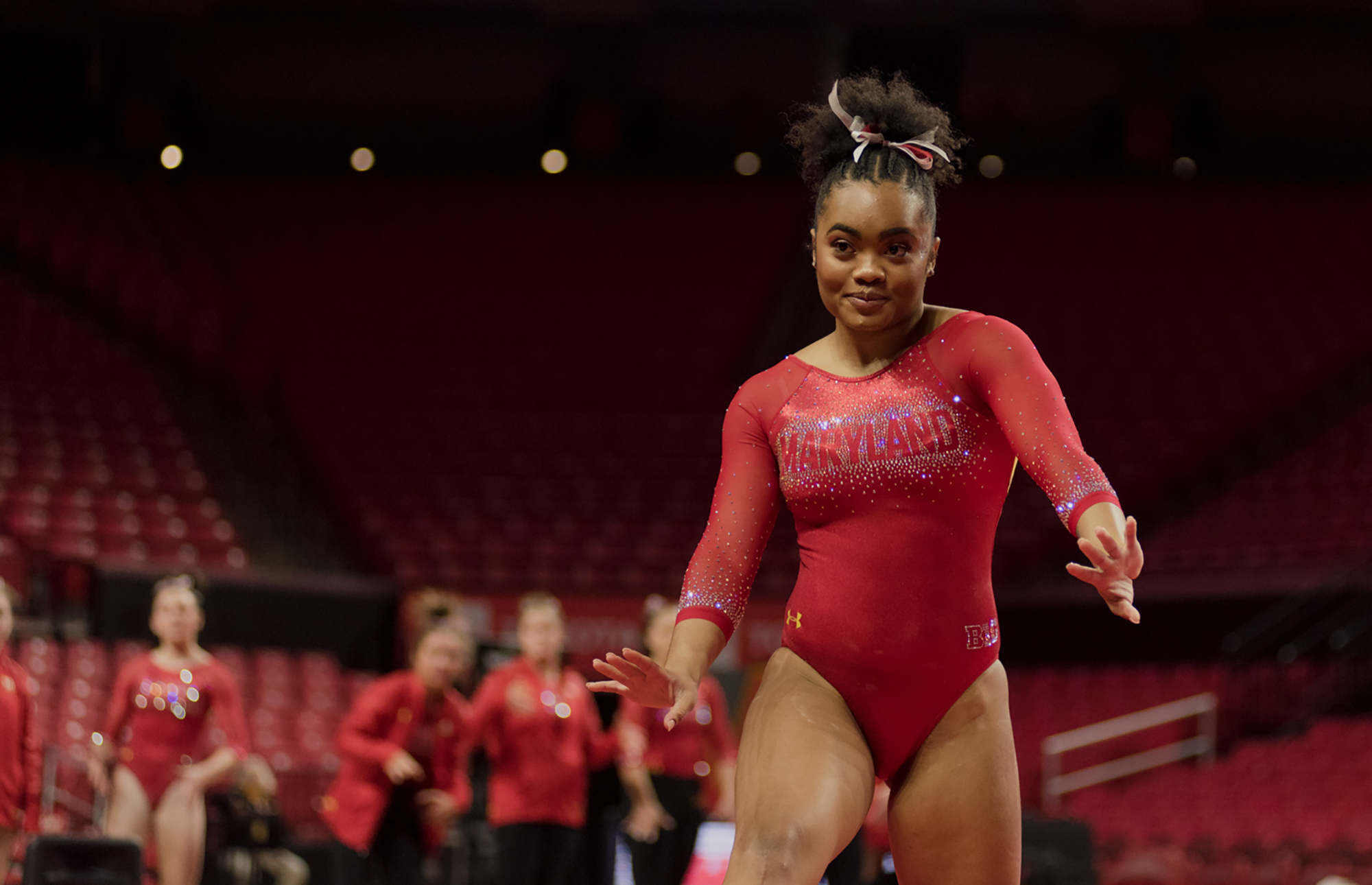 Every twist, every flip, every kick of a floor routine — they each have their own history that’s specific to the gymnast performing.

Gymnasts craft most of their floor routine before the beginning of the season, and they spend many hours in the gym polishing their stunts throughout the year. By the time these moves reach the floor, the hope is that everything comes together for a quality score.

For Maryland gymnastics, fresh off a season-best overall floor score at the Big Five meet last Saturday, the meticulous preparation of developing its floor routines, move by move, has been paying off.

“I’ve been proud of them all year on floor and how they put themselves in the zone of competing aggressively but having fun,” coach Brett Nelligan said. “That’s the balance you have to have on floor.”

Maryland’s floor effort over the weekend was led by freshmen Reese McClure and Emma Silberman and junior Sabriyya Rouse, all of whom scored a 9.875 or higher. This is the first year McClure and Silberman have pieced together collegiate floor routines, so many of their movements are new to the Maryland mat.

The Terps’ veterans have applauded the progression of the whole team’s choreography, which has built noticeable excitement during meets.

“I think, on floor, we’ve gotten into a good rhythm of keeping good momentum,” Rouse said. “Usually, as soon as that first person hits, it kind of just trickles down, and we go from there.”

Floor is both the longest rotation and the rotation for which scoring is most arbitrary, which can increase pressure for the competitors. But the Terps make it a priority to trust the long hours spent fine-tuning each and every maneuver, even if it’s not their favorite task.

“I hate dancing,” Silberman said. “I won’t do it. I literally rechoreograph my routine like 10 times. You know, once you get out there, you just have to be confident.”

During the choreographing process, the team relies on assistant coach JJ Ferreira, who is designated as its floor coach. Ferreira was an assistant for the Terps from 2010 to 2016 and returned to College Park for the 2019 season.

For gymnasts like Silberman, Ferreira is a useful resource when they need help putting everything together. Maryland spends about 40 minutes practicing floor routines every other day, alternating with vault. Ferreira is present throughout in order to put the best product possible out on the floor.

Nelligan is appreciative of Ferreira’s work, whether it be helping with stunts in practice or pulling the mat off the floor during a meet.

“He’s so detail-oriented, he’s really always focused on the cleanliness of their landings, how sharp their dance is, how clean their leaps are, and he really holds them to a high standard. I think they’re starting to see the fruit of all that work,” Nelligan said.

Regardless of which moves the Terps choose to employ, they aim for the routine to be clean and distinct, showcasing their flexibility.

Some floor competitors, such as Rouse, relish the only opportunity gymnastics gives them to dazzle the crowd, blending dance and tumbling.

“I like floor,” Rouse said. “Floor’s my favorite event … because you can have fun, interact with the crowd, interact with your teammates, and you don’t have to be so serious. You can show your personality.”