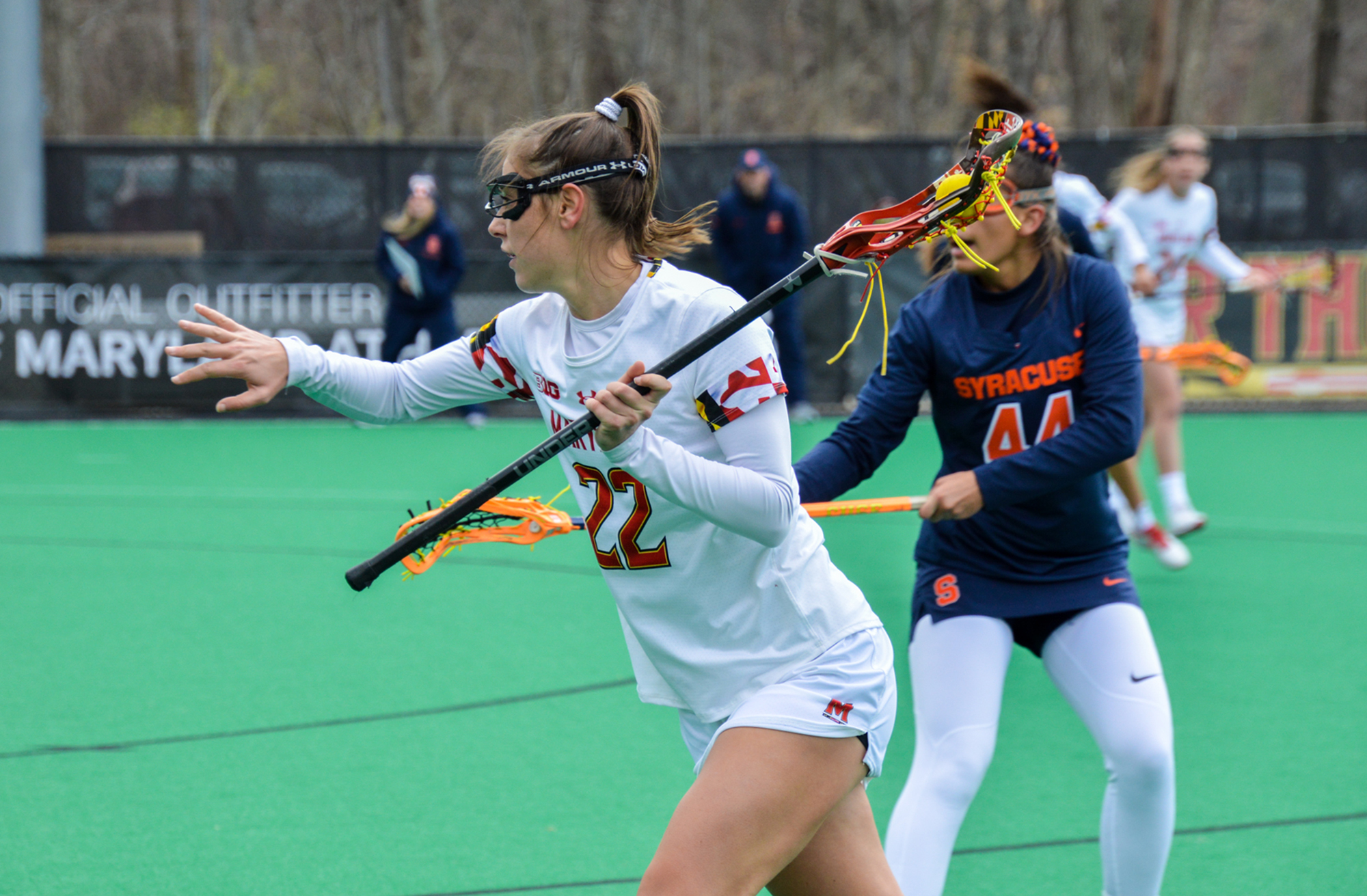 Coach Cathy Reese could be heard yelling “three shots is not good enough” in the first half of Maryland women’s lacrosse’s game against No. 4 Syracuse.

It was for good reason — the Terps struggled throughout the opening 30 minutes to create opportunities on offense as the physical Syracuse defense stifled them.

And while Maryland was able to erase most of a four-goal deficit in the second half on Saturday, strong play down the stretch from the Orange fended off a Terps comeback, handing the defending national champions a third consecutive loss, 10-5.

“We need to be able to play 60 minutes and not have these bursts of great play and then lows as well,” Reese said.

[Read more: Still without a clear No. 1 goalie, Maryland women’s lacrosse is confident in its options]

The game was originally set to take place on Friday at 3 p.m. at Syracuse, however, Maryland declined to travel, citing worries over a potential snowstorm further upstate in New York.

The Orange elected to travel to Maryland for the game, losing out on a home game and a planned senior celebration in what would be the last game of the season at their home field, Carrier Dome, which is set to undergo roof replacement.

“You feel a little bit disrespected, you get a home game and you have to play it away at their field, it doesn’t make you feel good,” Syracuse coach Gary Gait said. “It gives you some definite energy to come down here and play well.”

The Terps opened up hot, earning a free position shot just one minute in. Attacker Libby May’s shot was saved, and while midfielder Grace Griffin was able to grab the ground ball, attacker Kali Hartshorn’s bad pass gave possession away. It was the first of a handful of turnovers, which would become a key factor in the match.

Syracuse attacker Meaghan Tyrrell then went down the field and put the Orange on the board first off the miscue.

It was a sloppy first half for the Maryland offense as it struggled to get the ball into the attacking half on some possessions. And poor passing hindered the Terps in the midfield.

“We turned the ball over too many times going from one end of the field to the other,” Reese said. “Twenty turnovers isn’t good enough for us. We like to be under 10. That’s at least 10 more possessions that we would’ve had a chance on, on the offensive end.”

Goalkeeper Maddie McSally’s play served as a bright spot for Maryland, though. She kept the Terps in the game in the first half with seven saves, including two on free-position shots.

Attacker Emily Hawryschuk, Syracuse’s leading goal scorer, got one past McSally in the first half on a nice move inside the crease for her 31st of the season. Midfielder Sierra Cockerille added to the Terps’ misery, scoring from long range and deepening Maryland’s hole.

The Terps began to find openings in the Syracuse defense in the final minutes of the first half, getting shots off inside the crease. However, they couldn’t find the back of the net.

“We’ve got to shoot better, I feel like I’ve been saying this too many times right now,” Reese said. “Hopefully this adjustment will be made at some point, otherwise this will be a thought year.”

Hawryschuk found her second tally with nine minutes remaining in the half, which brought the score to 4-0 at halftime.

Maryland came out of the gate firing in the second half, as Hannah Warther scored within a minute to continue her great form for Maryland.

McSally made another save from a free position shot, but the Orange were able to retain and score on a second free position chance.

Play stopped briefly as captain Meghan Doherty had to change sticks after hers broke in half. After the change, the Terps forced a turnover, took the ball down the field and scored on a free position shot from Griffin.

“Whatever it takes to get a little fire,” Doherty said. “It just gets a lot of people excited to have something. We trusted each other and tried to latch onto any sort of energy that we could and capitalize on the opportunities.”

Maryland continued its comeback, capitalizing on a fourth consecutive turnover from the Orange as Griffin put away a second goal of the game — and her second of the season.

The Terps kept rolling on offense after Syracuse committed another turnover. Brindi Griffin capitalized by scoring her first of the day to bring her squad within one.

Syracuse maintained its edge, though, as Hawryschuk scored twice. A free-position goal from attacker Hannah Leubecker kept the Terps within striking distance.

In the end, though, goals from attacker Megan Carney, midfielder Sam Swart and Hawryschuk late in the second half iced Maryland and ended the Terps’ would-be comeback, handing them a third straight loss in the process.