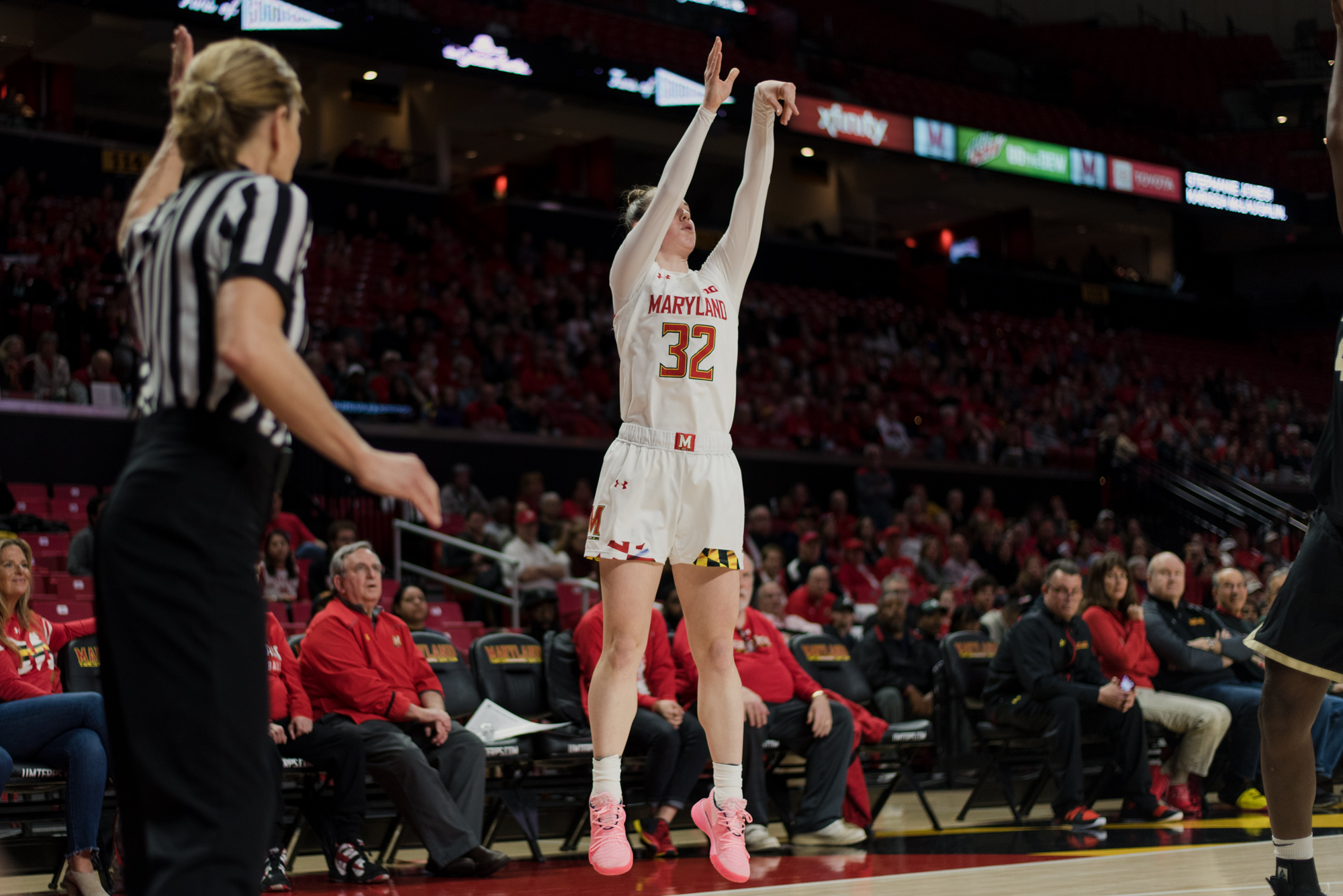 Up 34 points and the game all but won, senior guard Blair Watson let one last triple fly from the left wing having missed her previous five attempts.

She set herself and held her followthrough to see it hit nothing but net. The 3-pointer put all four seniors in the scoring column on Maryland women’s basketball’s Senior Night before they exited to a standing ovation.

Behind 45 combined points from the seniors, Maryland defeated Purdue 88-45 on Tuesday to earn its 13th straight victory and remain the top team in the Big Ten.

“Senior Night is always really special to me and our program. I appreciate everything about this class,” coach Brenda Frese said. “They’ve really worked hard since day one, through injuries, adversity. They’ve always stepped up to accept responsibility and you see their leadership every single day for this team and this program.”

The Terps started slow, though, going down 10-7 in the game’s first few minutes due to lethargic defense and poor rebounding.

A change in the starting lineup was the main reason why. After keeping the same opening five throughout the team’s 12-game winning streak, Frese gave senior guard Sara Vujacic her first career start.

While she knocked down a corner triple in her four-minute stretch, Maryland sacrificed size inside with forward Shakira Austin on the bench. Two early offensive rebounds from Purdue led to putback buckets, and the Terps couldn’t keep the Boilermakers from getting other easy points in the paint.

Once Austin and guard Ashley Owusu came on the floor, the team flipped a switch on both ends. Maryland ended the period on a 10-0 run over the last five minutes, locking down defensively and getting point-blank shots near the basket.

“We didn’t start as sharp as we wanted to,” Frese said. “I think [it was] a little bit [because of] the bye-week and the break, but I thought we made some nice adjustments.”

The Terps continued to look strong on both ends to begin the second frame, but a cold shooting stint and sloppy passing kept them from growing the lead much.

They held Purdue to just 20 percent shooting in the frame, including a shot clock violation and eight turnovers. Maryland didn’t need to employ its press to provide resistance and simply allowed the Boilermakers to keep shooting jumpers instead of getting inside looks.

Eight turnovers of the Terps’ own, though, thwarted multiple chances to run away with the contest. They committed multiple sloppy passes trying to force transition chances, and a couple of miscues occurred from mishandled dribbles when trying to push the pace.

Still, Maryland was efficient enough to manufacture a 13-point lead by halftime. Forward Stephanie Jones had her way inside, notching 12 points on 6-of-8 shooting, which helped offset an 0-for-5 effort from behind the arc by guard Blair Watson.

“I thought Steph set the tone for us,” Frese said. “It makes us a better team when she puts together [stretches] like how she’s playing.”

Forward Kaila Charles and Austin put the game away for good in the third period. The duo combined for 15 points and six rebounds in the frame, including one alley-oop finish by Austin on the fastbreak.

After just three points in the first half, Charles looked determined to impose her will. Whether it was driving to the hoop with ease or skying for offensive boards, the senior effectively put the game away.

The Terps got almost any shot they wanted inside, and the Boilermakers were helpless to stop it. Just when Purdue started to clog the interior, Maryland caught fire from behind the arc. The team hit 3-of-4 from deep, with Vujacic capping off Senior Night in proper fashion with a swish in the quarter’s final seconds that excited the fans one last time.

“This was a special night for me,” Vujacic said. “My parents visited the USA for the first time … so it was really special for me just to have them by my side.”

Maryland continued to pour it on despite holding a 27-point leading heading into the fourth. Frese continuously preaches winning each quarter no matter the score, so she had her team playing with high energy until the final buzzer.

All four seniors scored and exited to a standing ovation in the game’s final minutes. The Terps now have a 13-game winning streak, this time coming with an all-around effort that helped hold their opponent to the lowest point total in a conference game since 2018.

“I love defense, so when our team has a really good defensive night I’m hyped. I’m super excited,” Watson said. “I think we need that going into March for sure because we have a lot of teams we’re going to face that are a lot bigger, badder, and a lot more hard competition. But I think the way that we’re going and the way that we’re trending … they should be nervous for us.”