No. 7 Maryland women’s basketball stays red-hot with 85-56 win over Wisconsin 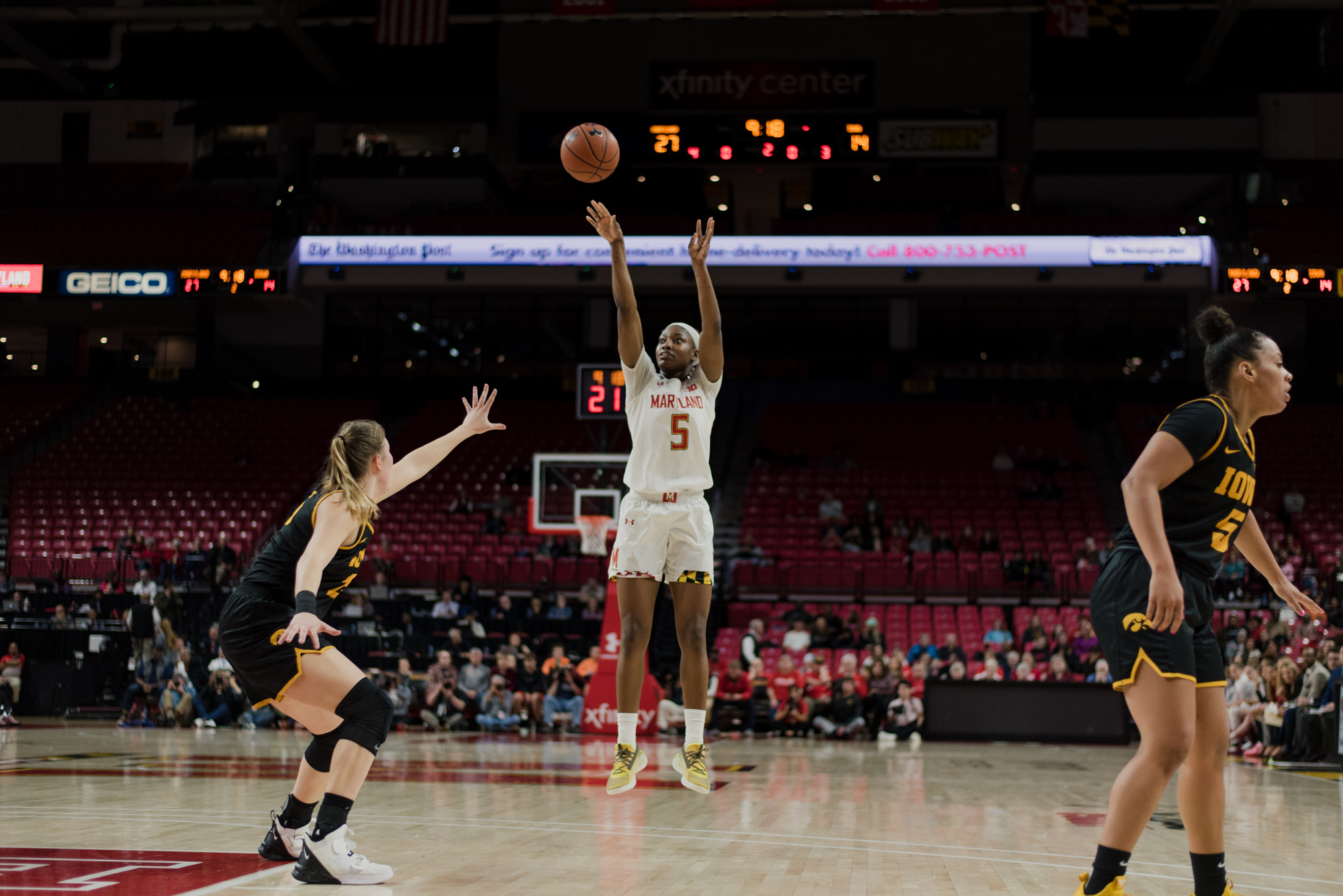 Intent on playing 40 strong minutes after a poor first half in its last outing, Maryland women’s basketball ran away with its contest in the opening minutes against Wisconsin.

The team trapped Badgers guards early, forcing more turnovers than points for the opposition in the opening quarter and earning a 30-point lead by halftime.

Maryland saw contributions from all nine players, but forward Kaila Charles’ 16 points led the way in the team’s 85-56 victory Wednesday, extending its winning streak to 12.

“We just wanted to come out hot. We know that they played Indiana really tight and some of the top teams in the Big Ten pretty tight,” guard Taylor Mikesell said. “Just jump on them early, take away their energy from the start, so I think we did a pretty good job of that.”

Unlike in their sluggish first half at Penn State, the Terps began this road game determined to set the tone. Following an opening Wisconsin score, Maryland rattled off nine straight points and ran away with the game from there.

Coach Brenda Frese employed the full-court trap immediately, taking no chance at another slow start. The Badgers looked incapable of getting the ball past halfcourt with the pressure and repeatedly threw terrible passes into the hands of Maryland players or out of bounds.

Thirteen Wisconsin turnovers in the first period led to 23 points for the Terps. After so many early miscues, the Badgers looked lifeless and let Frese’s squad have its way.

Forward Shakira Austin imposed her will in the quarter’s final five minutes, scoring nine of her team’s final 11 points via an array of post moves and hooks. Her size once again proved too much for smaller defenders to withstand.

“She’s such a big presence inside, 6-foot-5 with her length,” Frese said. “When she goes and secures those double-teams that she was taking in the first half, that really opens [things] up to our shooters.”

While Wisconsin committed nine fewer turnovers in the second period, it couldn’t defend a rolling Terps offense. Forward Kaila Charles, who sat just four points shy of sixth on Maryland’s all-time scoring list to begin the second, looked determined to climb the ranks in the frame.

She did so by scoring her team’s first three buckets, with the record-setting basket being a slick hesitation move to the rim that left her defender in the dust.

The Terps would continue to push the pace and lock down the opposition to generate a 30-point halftime lead. They held the Badgers to just 25.9 percent shooting while making over 50 percent of their own attempts and hitting four triples.

Wisconsin played its best quarter out of the break, scoring 19 points and cutting its deficit to as little as 27.

But the Terps simply had too much firepower. Despite three triples by the Badgers, Maryland always seemed to thwart any brief signs of momentum from its opposition.

Forward Stephanie Jones and guard Diamond Miller did most of the damage in the frame. They combined for 11 points and some crowd-silencing buckets, pushing the lead back above 30 to effectively put the game out of reach heading into the final quarter and allow Maryland’s bench to get some extra minutes.

“I think on any given night you can see that we’re able to expose wherever we can against the defense,” Frese said. “When you have so many weapons, both inside and outside, that’s where you want to be when you’re building towards March.”

Wisconsin made one final run in the fourth, cutting its deficit to 26 and taking advantage of a Maryland team that appeared uninspired to begin the frame.

But Frese, always wanting her team to play hard no matter the score, got on her team one final time to wake them up. The players responded with a quick 7-0 run to put the winning stamp on the contest.

Despite losing the second half by a point, the Terps extended their winning streak once again, this time with five players scoring in double figures and lockdown defense that contributed to the Badgers’ 25 turnovers.

“Just stay locked in. Focus on ourselves,” Mikesell said when asked about how to keep improving. “We have two more games to finish out strong. Obviously we’re trying to keep focusing on our transition, our defense and our rebounding — [those are] kind of our three big things — and then offensively, just keep being confident.”