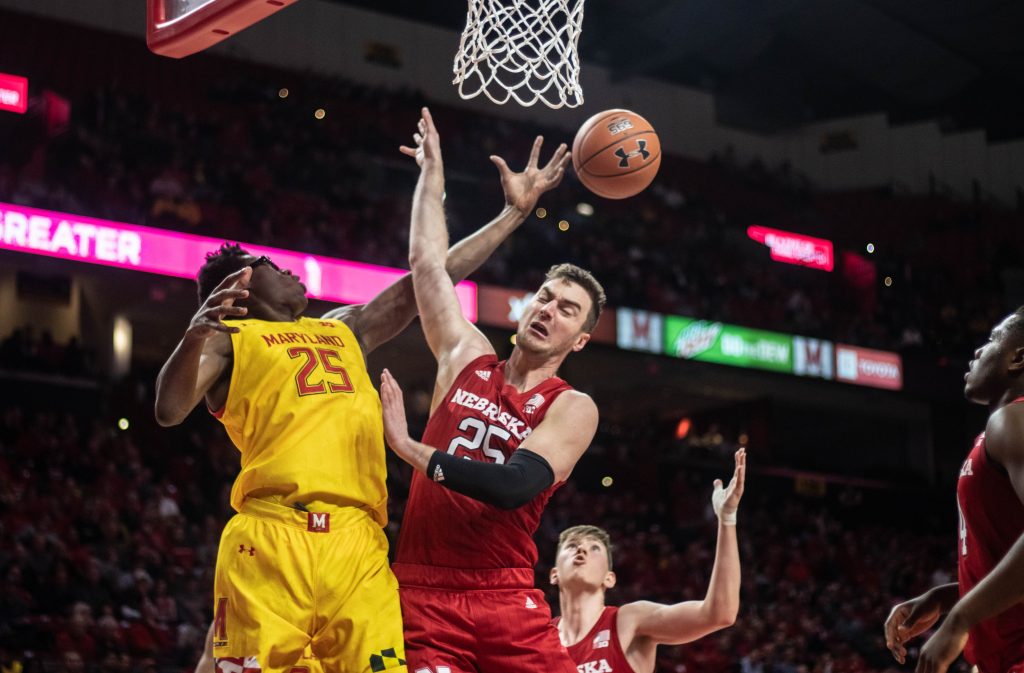 COLUMBUS, Ohio — So much of basketball comes down to the way the ball bounces.

There are ways to counteract the randomness. Boxing out can help increase a team’s chance at corralling a lucky bounce. But then there are moments where all you can do is throw your arms in the air and wonder about those unforeseen ricochets.

During Sunday’s 79-72 loss, there were moments in which lapses in concentration from Maryland men’s basketball led to second-chance points for Ohio State. There were also a few of those head-scratchingly unfortunate bounces, enough to drive any coach insane.

“The two that are maddening are the missed free throws — one bounced long,” Terps coach Mark Turgeon said.

Those two boards were part of the Buckeyes’ 13 offensive rebounds, which they converted into 14 second-chance points. Other issues arose to ultimately end Maryland’s nine-game winning streak, most notably off nights from guard Anthony Cowan and forward Jalen Smith, in which each played their fewest minutes in well over a month.

But there’s frustration over how Ohio State commanded the boards, finding additional opportunities and cashing them in for critical points along the way.

“One of our keys before the game was not to allow offensive rebounds or second-chance points,” guard Aaron Wiggins said. “And they ended up getting a ton.”

[Read more: “Just one of those days”: Against Ohio State, Anthony Cowan struggled to get going]

On the first of those two maddening offensive rebounds off missed free throws, forward Andre Wesson managed to leap between his two defenders and tip the ball back out to his brother, Kaleb. That set up guard Luther Muhammad’s 3-pointer moments later, a costly side-effect of allowing the Buckeyes another opportunity.

Then, about seven minutes later, Andre Wesson feinted toward the paint before spinning back to his right, looking to get around forward Donta Scott’s box-out attempt. Wesson lucked out when the and-1 free-throw deadened on the rim and fell right to him.

When Wesson went tumbling to the floor, Scott put his arms out, pleading his case to the officials. But Wesson went to the line anyway and hit both of his attempts, creating another four-point trip down the floor for the Buckeyes in the first half.

“We emphasize boxing out every day. It’s something that Coach takes pride in,” guard Eric Ayala said. “Boxing out wins games. We missed a couple today; free throws, they got some extra ones on the free-throw line. Those type of plays win us games.”

It would be too far to say those types of plays alone caused Sunday’s loss, but they certainly played a part. And it’s not an entirely new phenomenon, either — only, the Terps tend to find a way to win regardless. Rhode Island pulled down 20 offensive rebounds during the second game of the season, for instance, but Turgeon’s squad still won by 18.

As Maryland looked for a way back into Sunday’s contest, Turgeon switched to a zone defense midway through the second half. In another road environment earlier this month, a change in defensive schemes helped the Terps surge back and topple Illinois, claiming first place in the Big Ten.

This time, though, Ohio State forced Maryland back into man-to-man after about four minutes and four offensive rebounds. In a 1-3-1 zone with under 13 minutes remaining, the Buckeyes made the Terps chase their ball movement around the perimeter.

Once they jacked up a shot, forward EJ Liddell crashed the boards from the baseline, bulldozed Scott out of his way and finished with a put-back lay-in. With the way Ohio State shot from deep — knocking down 40 percent of its threes — Maryland needed to close down quickly.

That left openings for players such as Liddell to take advantage of, pulling down three of his team’s 13 offensive boards.

“We weren’t very good at rebounding, but sometimes the ball doesn’t bounce your way, either,” Turgeon said. “Some days are just like that.”

Sunday was one of those days, with Ohio State’s work on the glass just one of the many frustrating factors combining into a win-streak-stopping loss. And so much of that can just come down to the way the ball bounces.