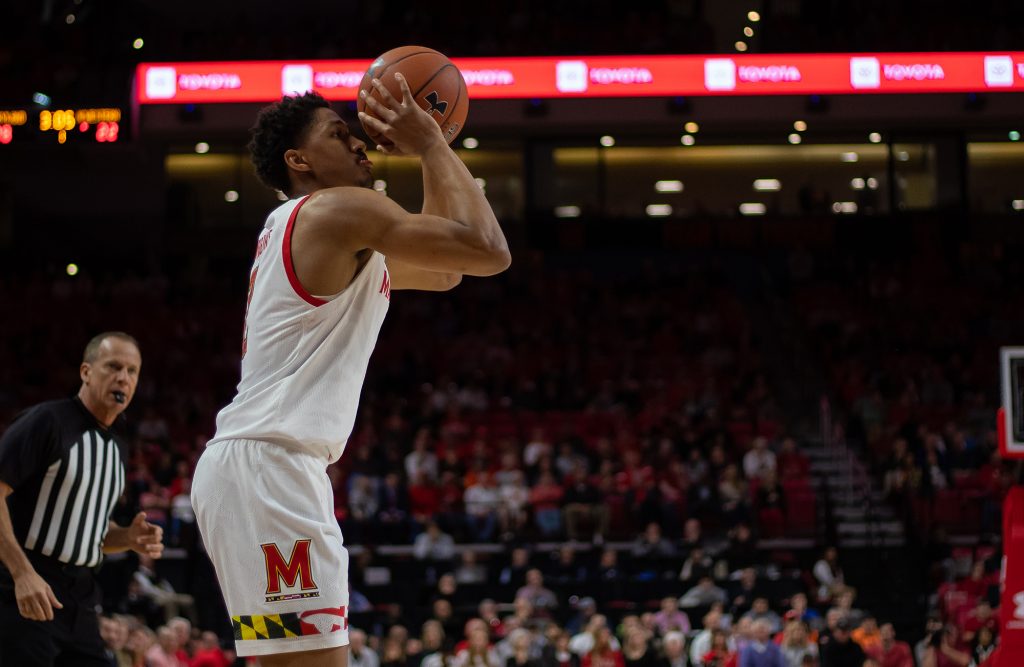 Guard Aaron Wiggins pulls up for a jumper during Maryland men's basketball's 76-67 win over Northwestern on Feb. 18, 2020. (Tyrin Gray/The Diamondback)

COLUMBUS — Anthony Cowan’s day ended early. It ended with him leaving the huddle and heading to the bench moments after scoring his first field goal of the contest with under four minutes to play.

It ended with a technical foul, his fifth personal, taking No. 7 Maryland men’s basketball’s most experienced late-game option off the floor when his team might’ve needed him most. Late in games, when the Terps need someone clutch, Cowan so frequently rises to the occasion. Cowan dished out seven assists, but overall he was a shell of his usual self Sunday, and he spent the last remaining minutes watching instead of playing.

He’s bound to have an off game once in a while. But combined with forward Jalen Smith’s foul-shortened first half and shaky shooting performance, Maryland lacked its usual bite against No. 25 Ohio State, losing a 79-72 affair to end its nine-game winning streak.

“We fought,” guard Aaron Wiggins said. “So I’m proud of my guys.”

When Cowan knifed through the lane with under four minutes remaining, he scooped a layup attempt and got knocked by forward Kaleb Wesson in the process. The senior hit the ground hard with Wesson and looked up at the officials wondering whether a whistle would come or not.

No whistle came, one of the few trips down the floor late devoid of a stoppage. And when Cowan realized there was no call attached to his make, he let his frustration be known. He kicked out his foot, which happened to pass close to Wesson’s head — although there looked to be no contact.

The crowd took exception. The referees did, too, upon further review. So after Cowan had made it a five-point game, Duane Washington got to make two free throws with Maryland’s top scorer on the bench for good.

When the pool reporter asked if the kick had been judged to not make contact with Wesson, Scirotto confirmed that was the case.

“He was looking right at the referee when he did it, so we can take all that out of the way that he was trying to kick the player, because he wasn’t,” coach Mark Turgeon said. “He was frustrated because he got tackled on a layup and there wasn’t a call.”

[Read more: The once turnover-prone Darryl Morsell is now an elite facilitator for Maryland basketball]

Without Cowan, the Terps hovered around a deficit of a few possessions. But they never got the critical stop when necessary, allowing the Buckeyes to see out the remainder of the upset.

For as strong as Maryland has looked this season with Smith and Cowan on the floor, the drop-off without them has often been just as noticeable. It’s led Turgeon to rely on a core group of six players, sprinkling in others here and there in the hopes of a few positive minutes.

At Schottenstein Center on Sunday, though, Turgeon opted to rotate more heavily in the first half. And while having guard Hakim Hart and forward Ricky Lindo on the floor at the same time concluded with a Buckeyes 7-0 run and a Turgeon timeout, the coach didn’t have much choice but to rotate once starting bigs Donta Scott and Smith each picked up two fouls.

“Stix is a big piece to this team,” guard Eric Ayala said. “For him to go out early, Donta got some fouls early, they’re big for us up front. We need those guys down low.”

Turgeon turned to 7-foot-2 Chol Marial for eight minutes in the opening frame, and while he seemed capable, Smith’s absence was still felt. Without Smith on the floor for much of the final 5:28 of the first half, Maryland managed to hit one field goal — one of Wiggins’ six 3-pointers.

If not for free throws, the run to close the opening frame might’ve been worse. Instead, a tie game following Wiggins’ trey turned into a seven-point Ohio State advantage. And it swelled to 14 before Turgeon called a timeout just over two minutes into the second half.

“Our last four minutes and our first four minutes were critical.” Buckeyes coach Chris Holtmann said. “We talked about it at halftime, you know: ‘This is going to say something about us, how we start the second half.”

It started with forward Kaleb Wesson — who made life difficult for Smith throughout on his way to 15 points and nine boards — knocking down a triple. Ohio State hit 40 percent of its 3-pointers and commanded the offensive glass, producing 13 boards and 14 second-chance points.

Maryland seemed to have a hint of an opportunity once Cowan scored his first field goal, cutting the deficit to five. And even after Cowan fouled out, Wiggins hit a pair of threes to keep the Terps in it, combining with Ayala to produce 36 points.

“We were teetering on getting blown out there, and those guys started to step up for us,” Turgeon said. “Didn’t play our best game, but we competed.”

There are worse losses than this and worse places to lose. But on the road against the Buckeyes, a combined 4-for-12 shooting performance from Cowan and Smith won’t result in many wins.

Maryland discovered that on Sunday.