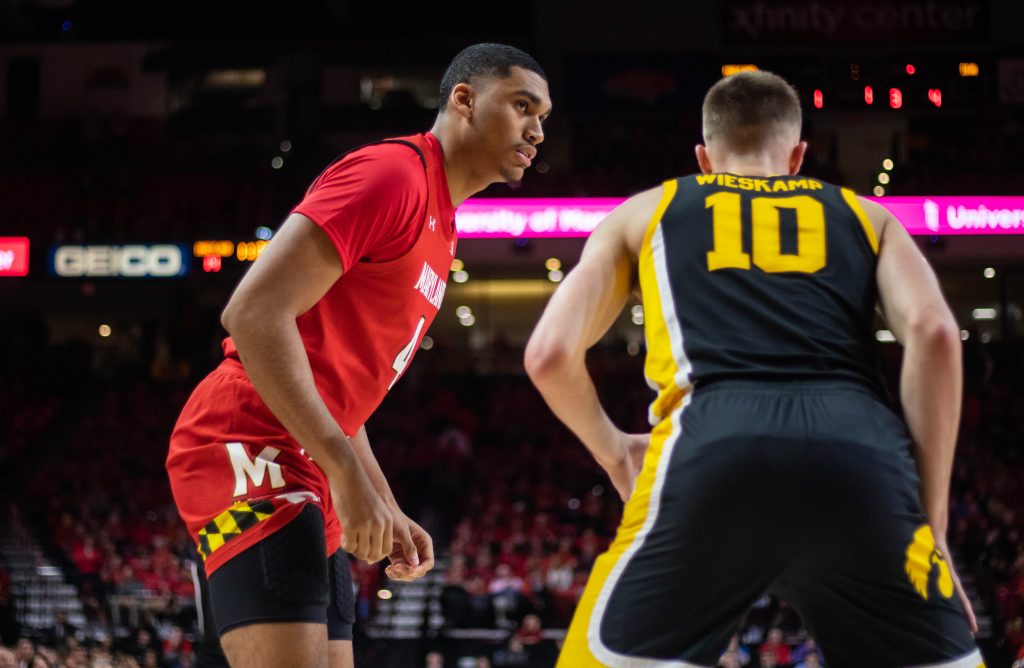 When Ricky Lindo jogged back to the bench just over a minute after he first checked in on Tuesday, it wasn’t as if he’d made a considerable impact. The sophomore had picked up an off-ball foul and corralled a defensive rebound before Mark Turgeon pulled him from the floor.

But Turgeon still clapped as Lindo jogged toward him. In that brief cameo, the Maryland men’s basketball coach saw a glimpse of what he needs from role players such as Lindo.

When it comes to the Terps’ frontcourt, Jalen Smith is the linchpin. He’s produced nine straight double-doubles and has featured for at least 32 minutes every game after a Jan. 10 blowout loss to Iowa. Smith still needs a break at some point, though, and Lindo is a prime candidate to offer his teammate a breather.

It’s not a glamorous role. It’s one with few minutes attached and a higher focus on defense than racking up points. But it’s what Maryland needs, and it’s what Lindo could give them.

Over the last month, Turgeon’s made it a point to challenge Lindo and fellow forward Joshua Tomaic in practice to learn more than one position, giving him greater flexibility when rotating his frontcourt based on matchups. Turgeon has 7-foot-2 center Chol Marial — still not 100 percent back to himself after extensive injuries the past few years — to battle with bigger, slower opponents.

But Marial isn’t yet suited to guard some of the speedier big men that the Big Ten has to offer. That’s where Lindo comes in.

At 6-foot-8, he’s undersized to play the five. But his athleticism and speed help make up for that, and Turgeon plans to play him as both a power forward and center going forward.

While the Washington, D.C. native didn’t play against Nebraska — after that contest, Turgeon said he needed to work on his defensive consistency — Lindo appeared for eight minutes against Michigan State last weekend. Over seven of those minutes were at center, helping to fill in when Smith got into first-half foul trouble.

“His energy’s been great,” guard Eric Ayala said. “He’s been willing to learn, and whatever coach is asking him to do, he’s willing to do. I’m happy for Ricky, just seeing him get more opportunities, and we need him.”

[Read more: The once turnover-prone Darryl Morsell is now an elite facilitator for Maryland basketball]

Smith played for nearly 38 minutes in Tuesday’s win over Northwestern, posting 22 points and 19 rebounds. That performance limited the need for Lindo to see much playing time. But for just over half a minute in the first half, Lindo played as the Terps’ biggest player, and that’s when he corralled the defensive rebound.

He left shortly after and returned for a one-minute stretch later in the first half, missing a layup. He pulled down an offensive board on the next possession, but it was immediately knocked from his grasp.

Still, Lindo’s presence can do a number of things, be it allowing Smith to rest or giving him more freedom to operate outside the paint while on offense. It’s the same for Maryland’s other frontcourt options: players who won’t frequently take over games but can be relied upon when the time comes.

“As a team, we all have trust in them,” guard Darryl Morsell said. “And if they gotta play for an extended amount of time, I feel like we’ll be fine, and the guards will just have to pick up where we need to.”

Turgeon doesn’t expect perfection from Lindo. He knows better than that. What he wants is Lindo’s smart defense and strong rebounding attributes for short stints, giving the Terps a boost when required.

That hope hasn’t always materialized this campaign. However, as the regular season winds to a close with a slew of tough matchups — including No. 25 Ohio State on Sunday — Lindo could continue to carve out a few minutes here and there.

It’s not a role that will attract much notice. But it’s what Maryland needs nonetheless.