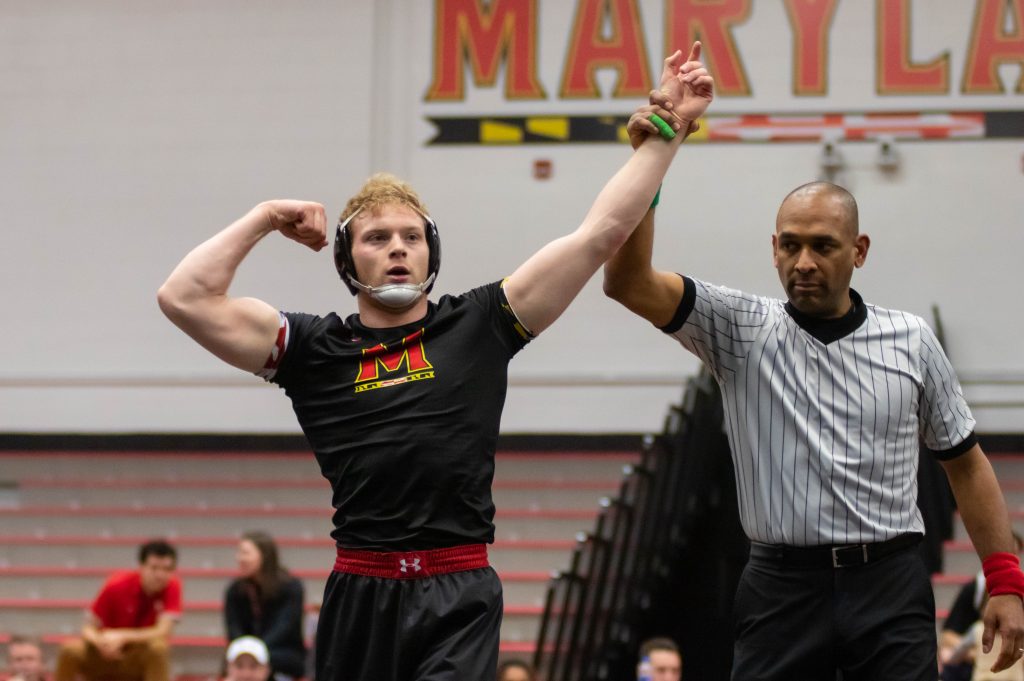 Maryland wrestling’s King Sandoval took a 3-2 lead over Rider’s Richie Koehler in their 133-pound bout, needing to hold onto the close advantage for nearly to a minute.

As time ticked down in the third period, Sandoval was clinging tight on top. However, with about 10 seconds remaining, Sandoval got caught and flipped over, as Koehler landed a takedown and two back points to win a 6-3 decision.

The Terps needed to take advantage of those close leads Saturday night, but they were unable to close out as the Broncs won the 22-16 dual to spoil Maryland’s Senior Day.

“I was just really proud of the seniors,” coach Alex Clemsen said. “Three guys that got to wrestle today really wrestled hard. … Just happy for those guys that they were able to put on a good show.”

Saturday was a rematch of a Jan. 11 dual, which Rider won 24-8. At the beginning of Saturday’s rematch, it looked as if the Terps were on their way to another blowout, as Maryland lost each of its first four bouts, including Sandoval’s.

“[Sandoval’s] capable of not only winning big matches against that caliber of competition, but I think even a step up,” Clemsen said. “King Sandoval’s got a lot of ability. I think we’re not seeing the best King. I still think he’s discovering himself.”

All four losses were decision losses, which kept the Terps in the game. In the opener, Maryland’s Brandon Cray trailed just 3-1 against Jonathan Tropea, but Tropea held his position on his way to a 5-1 decision.

After taking the top position in the third period, 141-pounder Hunter Baxter needed to get back points to get himself level with Rider’s Peter Lipari. Baxter trailed 4-2 and despite locking up riding time, Lipari still came out with a 4-3 decision.

[Read more: Maryland wrestling is focused on making the most of its final two regular-season duals]

Redshirt junior Peter Tedesco, also honored in the pregame Senior Day festivities, was given the opportunity to take the mat in College Park one last time. However, Gino Fluri dominated the bout, winning a 6-2 decision.

“It was pretty great,” Cordio said. “I’ve been in a little bit of a downswing recently, losing a few in a row. To come out here in our last dual and pull off a big win like that against a team that’s kind of become one of our rivals felt really cool. To be doing it in front of our home crowd, can’t really beat that.”

Rider had chosen to rest Jesse Dellavecchia, but that backfired as Cordio gained position on Layton, putting him on his back to fire up the crowd going into the intermission.

That momentum continued at 165 with Kyle Cochran. The redshirt sophomore got the upper hand on redshirt freshman Joe Casey, winning an 11-2 major decision that pulled Maryland within two, at 12-10.

“I was feeling pretty upset yesterday,” Cochran said. “I talked to Coach Clemsen. I talked to my dad, and they said to put it behind me and wrestle really tough today — and that’s what I did.”

Maryland had two good cracks at taking the lead, especially at 174, with redshirt senior Josh Ugalde wrestling in his final home bout. Ugalde had a chance to take the lead, trying to get Dean Sherry for back points in the third period, down 6-4.

Ugalde was called for locked hands, which gave Sherry a 7-4 lead, and he rode that to a decision victory. George Walton followed for Rider, winning a 12-5 decision over Philip Spadafora, who was wrestling up a weight class this weekend.

The most anticipated match of the evening, the 197-pound bout between Jaron Smith and Ethan Laird, never happened. Rider chose to forfeit the dual, putting Maryland within two at 18-16.

It was a disappointing finish for Smith, looking for one more statement win to put on his resume before the Big Ten Championships on March 7.

That meant Saturday’s match came down to the battle of the heavyweights, as Parker Robinson was looking for his first dual win of the season.

Facing Ryan Cloud, Robinson looked tired after the first period as he lost a 12-4 major decision to end the dual.