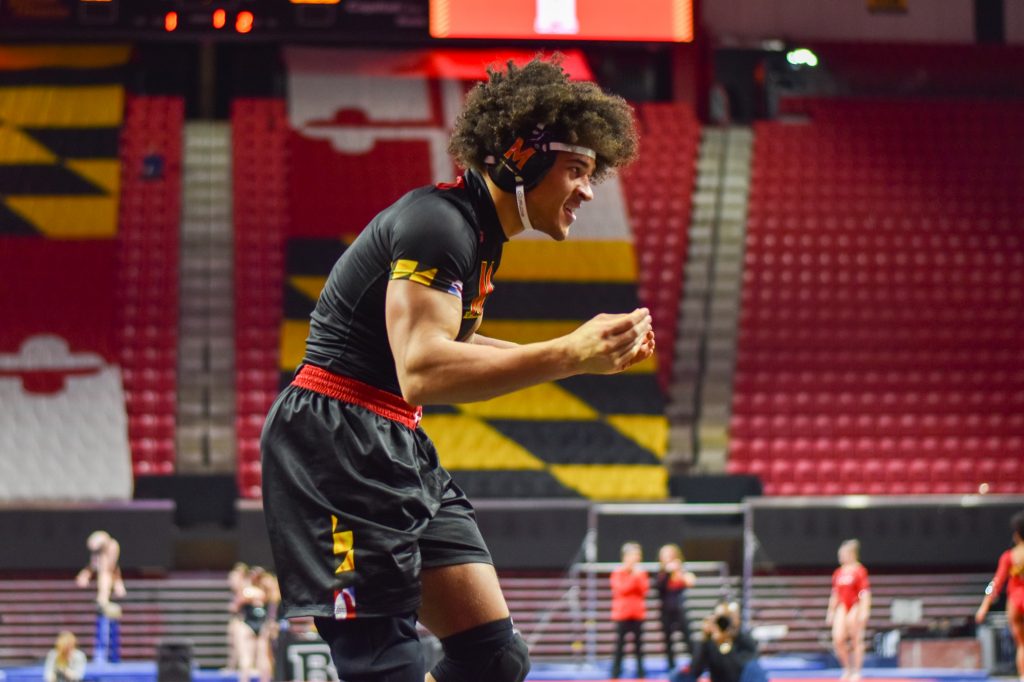 Jaron Smith’s pin during his 197-pound bout against No. 16 Lucas Davison brought a positive end to an otherwise tough match for Maryland wrestling, in a 37-9 loss to Northwestern Sunday.

The defeat concluded an 0-9 record in the Big Ten for the Terps, the program’s fourth straight season going winless in conference play.

But while Maryland’s Big Ten schedule is over, the team still has two regular-season duals remaining before preparations ramp up for the Big Ten Championships. So with a grueling conference slate now a thing of the past, the two final nonconference duals — and Smith’s promising pin — serve as potential building blocks for a strong postseason.

“Guys have worked really hard. They’ve done a good job,” said coach Alex Clemsen. “This team’s been knocked down a couple times this year, and they’ve done a really good job of bouncing back.”

This season has been particularly challenging for the Terps, who have a new coaching staff in the midst of rebuilding the program from the ground up.

Despite this season’s setbacks, Maryland has continued to work in the practice room and the Terps have done their best to keep morale and confidence up.

“We’ve actually had a couple of really good practices, probably some of the best practices we’ve had this year,” Smith said. “I feel like the focus on some of the positions was better. We’ve been really trying to stress being great partners in the room. That’s one thing that the guys on the team are definitely becoming more acclimated to.”

Maryland will wrestle against George Mason in its first Friday dual since facing Ohio State on Jan. 31. This weekend is also the first weekend since the Virginia Duals on Jan. 10 and 11 where the Terps will be wrestling on back-to-back days.

While this weekend won’t be nearly as hectic as the Virginia Duals, where Maryland wrestled three matches in six hours and four overall across two days, there’s an excitement about the team to get a few more matches in before the postseason begins. Part of that enthusiasm stems from Smith’s pin to conclude Big Ten regular-season play.

Opportunities to achieve similar results are limited with two duals left, but there’s hope Clemsen’s squad can put together a strong finish to the campaign.

“On any given day, anybody can win,” said 141-pounder Hunter Baxter. “If we show up and do our best every match, we can knock off some names.”

This season’s path has left the Terps hungry for more, and the team’s current motivation — more than anything — is a lack of satisfaction in the results so far.

“I think these guys are motivated to have a better showing and put a better product on the mat,” Clemsen said.

The Terps have been focused on keeping a short memory and getting immediately back to work. Practice has been good, but Friday and Saturday will be the litmus test for Maryland’s progress this season.

“We just gotta focus on what we can fix now,” Baxter said. “We’ve always been a good team at getting right back to work. We’re just trying to focus on doing our best this weekend.”