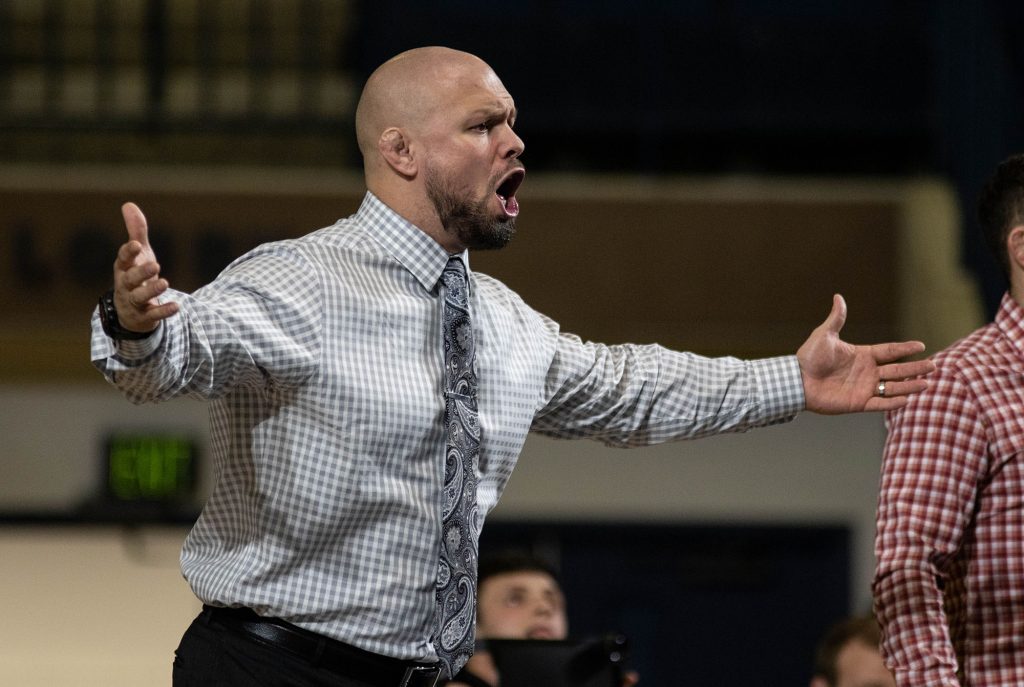 Five weeks separate Maryland wrestling from the NCAA Championships in Minneapolis, Minnesota, and with records of 2-14 overall and 0-8 in Big Ten duals, time is running out for the Terps to earn a statement win.

Just three duals remain for Maryland, and, perhaps more importantly, coach Alex Clemsen’s team finishes up its Big Ten schedule Sunday against No. 24 Northwestern. The Terps will wrestle on the main floor of Xfinity Center as part of the Beauty and the Beast promotion with Maryland gymnastics.

While It seems like the time for urgency within the program, the importance of Sunday’s dual is no greater than any others this season for Clemsen and his team — it’s just another match.

“Every match is important,” Clemsen said. “Literally every time you go out and compete counts for something. No special importance is put on any match. Every match is the most important match of the year.”

A new shift in the NCAA has put an emphasis on all matches, similar to men’s and women’s basketball and nonconference versus conference schedules.

This has helped Maryland stay humble in the practice room, despite a run of bad results and a current 10-match losing streak.

“If you wanna be one of the 33 that gets in for the national tournament, you have to treat every match like it’s the match so you don’t have a slip-up or a bad night,” Clemsen said.

Things around the program haven’t changed much over the course of the season, with the emphasis being more on progression rather than wins and losses.

[Read more: On a 10-match losing streak, Maryland wrestling strives to get on the same page]

Wins and losses come and go, but Maryland is looking to become a program on the rise after years in the cellar of the best wrestling conference in the country. This weekend is yet another stepping stone on that path.

One thing will be different on Sunday, though: the venue. Maryland has wrestled at least one match every season for the past five years on the main floor of Xfinity Center, and the dual against the Wildcats will be the next installment.

The Beauty and the Beast component just adds another layer to the challenge, but it isn’t anything that will catch the team by surprise.

“I’m a big Pavilion guy. I like that close, tight, intimate space,” Jones said. “The big gym is what the main arena is made for. It’s a lot of fun, too. When you’re out on the mat, you can’t really get caught up in that.”

With the end of the season looming, the team is constantly learning new positions and increasing its wrestling IQ.

It’s a lot for anyone, but it’s been much more noticeable from the Terps’ standpoint. Still, there’s hope that the lightbulb is slowly turning on.

“Everybody’s on a different technique level, different skill level,” 197-pounder Jaron Smith said. “Guys have to be more confident in their preparation this year, without a doubt. We’ve had a lot of great preparation this year. … As it gets to the end of the regular season, this is the time where the lightbulb should start flickering.”

Right now, Maryland has a long way to go before that light shines bright, but going into Sunday, there’s hope that a strong performance to conclude the conference slate can add some voltage to a struggling team in need of it.