Knocked down by injuries in past years, Jaron Smith now stands tall for Maryland wrestling 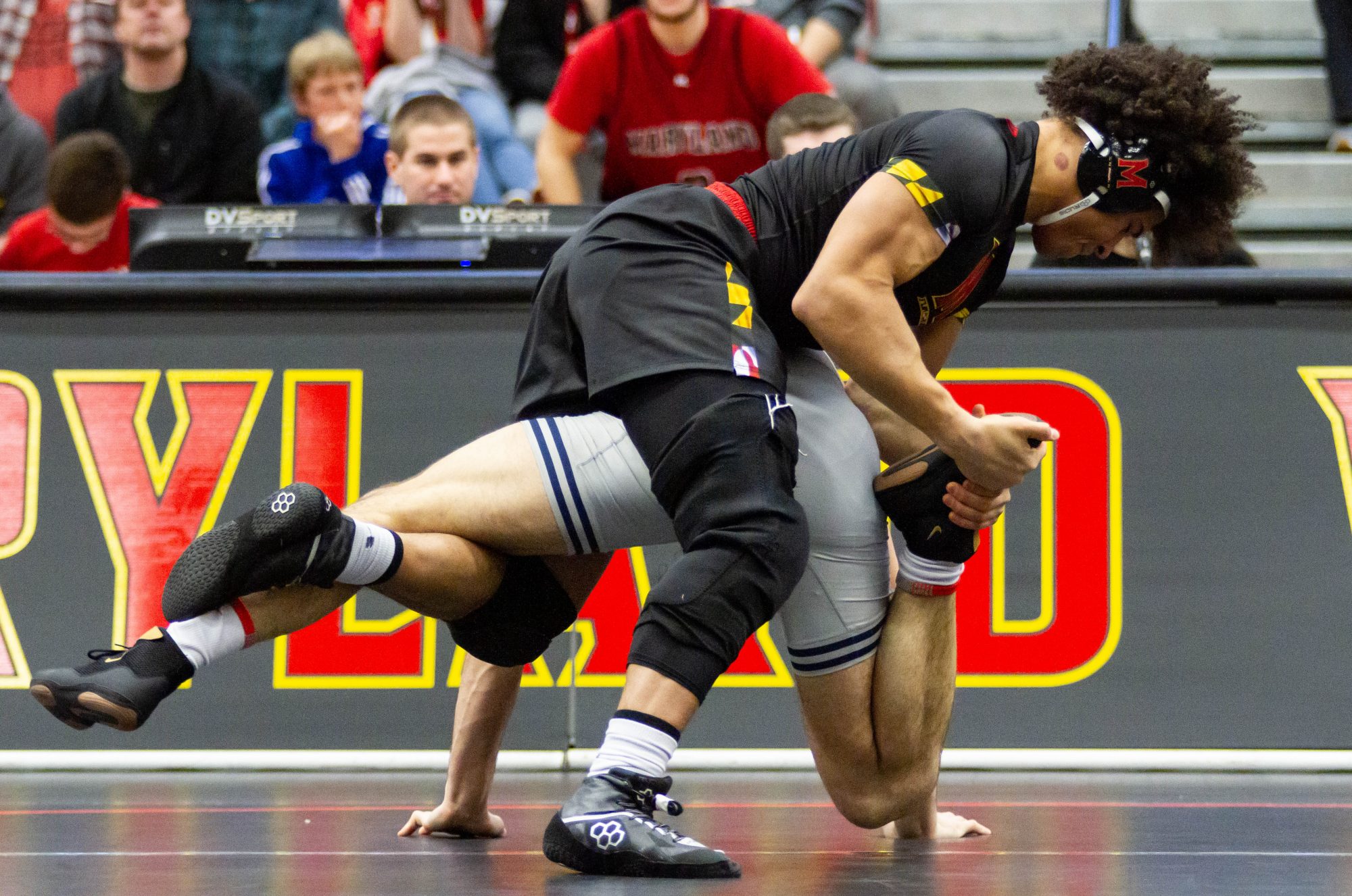 After more than a year off the wrestling mat, Jaron Smith was finally back.

The AU Round Robin on Nov. 9 signified his return after a slew of injuries cost him the majority of the past three seasons with Maryland wrestling, competing in just 11 total matches in that span.

Smith’s weight class changed, too, bulking up from the 184-pound class to 197 pounds for the 2019-20 season. Although it was both new territory and his first match back, he didn’t miss a beat.

Smith won a 16-1 tech fall decision over American’s Will Jarrell in his season debut. He’s since been a fixture for the Terps as they navigate a brutal Big Ten schedule, in the midst of his most successful non-redshirt season on the mat.

“The feeling is unreal,” Smith said. “I mean I wouldn’t have sat out for three, four years if I didn’t want to be out here.”

[Read more: Back from injury, Kyle Cochran is Maryland wrestling’s “most consistent guy in the room”]

Before coming to Maryland, Smith was already dealing with injuries, having torn his ACL in high school. In college, he’s had two more ACL tears — one in each leg — and a torn ligament in his thumb.

Being off the mat for so long took a toll on Smith, as he never really found consistency. The injuries also forced him away from his teammates and the coaching staff, unable to forge those relationships.

“I felt a little bit of separation from the team when it happened,” Smith said. “I stopped practicing, and one of the big defining factors you can have with your team is working out together and forming those bonds through battles. It’s hard in that regard.”

Even when he stepped back onto the mat, it was a slow process to get back to full health. And even now, Smith isn’t starting every match for the Terps this season.

Coach Alex Clemsen has worked Smith in and out of the lineup to try to avoid the injuries that derailed his prior campaigns.

“We try to give him rest when he needs rest, listen to his body a little bit,” Clemsen said. “Not just his body, but his brain and his heart, too.”

[Read more: On a 10-match losing streak, Maryland wrestling strives to get on the same page]

Despite having a full season under his belt in his freshman year, it’s been a while since Smith has gone through the rigors of college wrestling, a sport that requires intense practicing year-round.

“There’s an emotional and mental grind to what we do as a sport,” Clemsen said. “He’s very much like our freshmen in terms of how he feels, probably, from a total fatigue standpoint from all three factors — physical, mental and emotional.”

Through this adversity, Smith has always kept wrestling at the forefront of his mind. And his story of overcoming adversity has inspired other wrestlers on the team, including his roommate, 157-pounder Jahi Jones.

“The average person, that would break a person down and make them want to quit,” Jones said. “I’ve seen a lot of guys come through, get their bodies torn up in one season and didn’t come back. It just goes to show how much of a warrior Jaron is. He really wants this.”

Now 9-7 for the season, Smith has gotten into a rhythm — and he’s been grinding out results. For Jones, it’s not surprising that Smith would succeed like this after waiting so long to get back on the mat.

Jones was one of the first people to see that years ago, and he’s watched Smith tirelessly work his way back to form.

“He’s an animal. He’s a freak athlete,” Jones said. “I think we’ve all seen it. It’s just keeping him healthy to get him through to do it.”

With a few matches left this season, Smith still has more to prove despite what he’s already been able to do.

The ceiling remains high for someone who has plenty of wrestling left in store for him in College Park.

“It’s a good feeling to be able to win matches, but even still, I haven’t performed at the level that I would expect myself to perform at,” Smith said. “When I look at how I’ve done this year, there’s something that I can look at and I can say, ‘It doesn’t matter how good I was or am. I can be better than that.’ I know I can do more.”