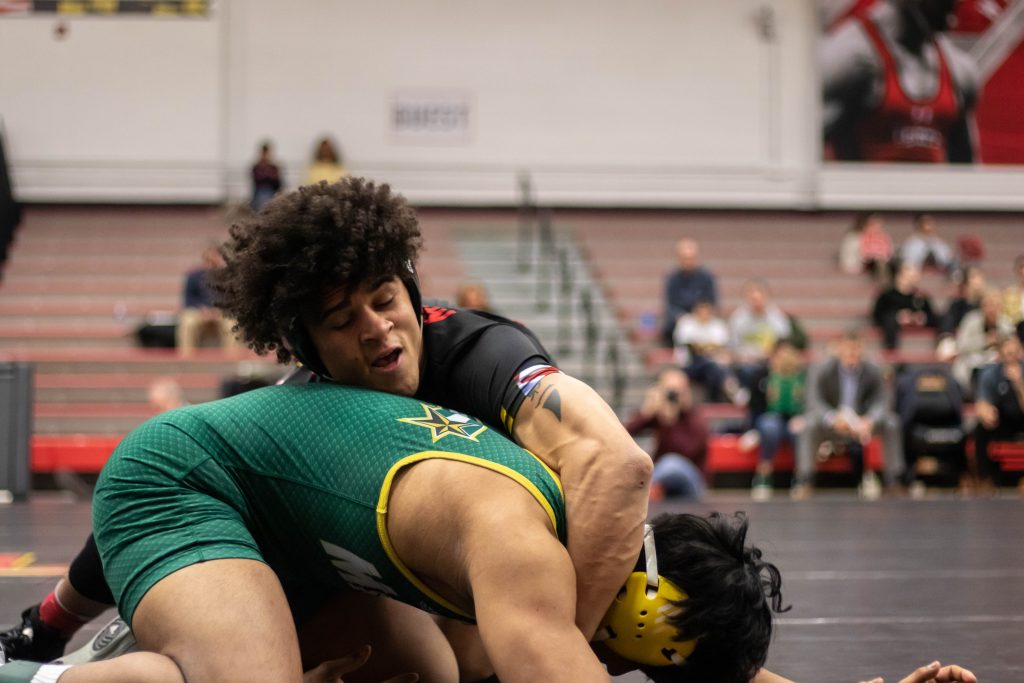 One of the Terps’ most in-form wrestlers, Smith delivered on the mat, toying with Montalvo on the way to a 22-7 technical fall victory to put Maryland ahead, 11-8, over the Patriots. Coach Alex Clemsen’s squad countered George Mason’s three-bout win streak with a three-bout streak of their own, adding bonus points to give itself a three-point lead with four matchups left.

However, a crucial team point deduction after Brandon Cray pinned 125-pounder Talha Farooq loomed large as the Terps lost a close dual to the Patriots, 18-16.

[Read more: Maryland wrestling is focused on making the most of its final two regular-season duals]

Maryland had chances early to get points on the board, but it was unable to do so, especially at 157 with Lucas Cordio.

He and George Mason’s Kolby Ho were locked up late in the third period of their bout as Cordio had just landed a takedown, taking a 7-5 lead with roughly a minute left.

In about 50 seconds, Ho landed a reversal to tie the match at 7-7, and then he got Cordio on his back for a four-point nearfall, winning an 11-7 decision to put the Patriots ahead 6-0.

“I think [157] and [165] got out of their gameplans,” Clemsen said. “They got stopped early and it affected them. They didn’t wrestle their match. They didn’t do a good job wrestling in their best positions and forcing their style and their system. We gotta learn from that.”

George Mason won the first three bouts of the dual, each decision victories, and would’ve taken a 9-0 lead into the 174-pound bout. But coach Frank Beasley was called for a team point after arguing stalling calls.

Maryland started its own win streak with 174-pounder Josh Ugalde, who saw his first dual action since facing off against Virginia on Nov. 2.

The redshirt senior, competing in possibly the penultimate bout of his college career, wrestled hard against Anthony Lombardo, taking a 4-1 decision after landing two takedowns.

Philip Spadafora, Maryland’s go-to 174-pound starter this season, wrestled up a weight class against the Patriots at 184. But he had no problems against Paul Pierce, taking a 4-2 decision to close the gap to three before the team point deduction.

With Smith’s tech fall at 197 and Parker Robinson losing a 6-1 decision to Jake Slinger, the dual was tied at 11 going into the final three bouts.

“[The tech fall] felt good,” Smith said. “You love to go out there and put up bonus points for the team, especially in a close match situation, which is where it was at the time.”

Cray needed a big result, which he got not even a minute into the first period of his bout against Farooq.

“I think it was just not getting flustered by him smacking me in the face basically, just keeping my cool and doing my talking through the wrestling,” Cray said.

But just after he landed the pin, the match referees called a team point deduction for him pushing down Farooq, an unsportsmanlike conduct penalty.

While Clemsen and the Maryland coaching staff tried to contest the call, it forced the Terps into a win-now situation at 133 or 141. King Sandoval, who was 4-12 in duals entering Friday, needed at least a decision victory to secure the victory for the Terps.

However, Josh Jones held his position on the mat and didn’t allow Sandoval to escape after going on top to start the second period.

He racked up enough riding time, plus an escape Sandoval let him have, to win a 2-0 decision, putting the pressure on Hunter Baxter at 141. Baxter faced Alex Madrigal, who led the nation this season in tech falls, and Madrigal won a major decision to seal George Mason’s victory.