Diets, workouts and discipline: A look into how Maryland wrestling makes weight 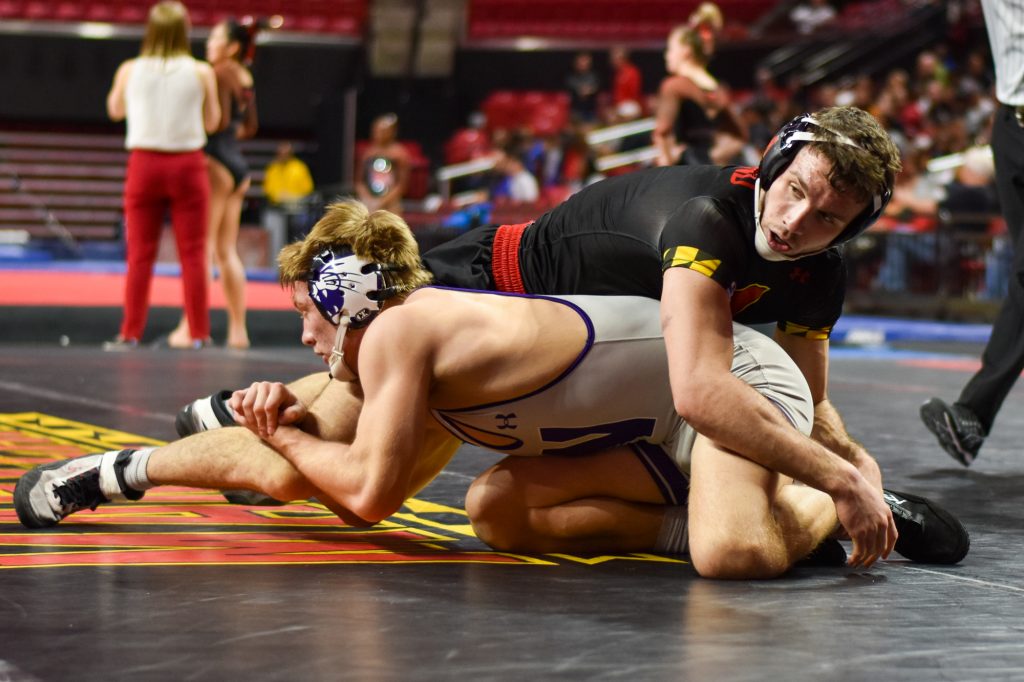 With one bout remaining against Illinois on Feb. 9, a win had been long out of the question for Maryland wrestling.

Still, the last matchup of the dual — coming at 165 since the Fighting Illini won the coin toss and chose to begin at 174 — had meaning for the Terps’ Kyle Cochran. He had prepared the entire week to wrestle then-No. 13 Danny Braunagel.

But Illinois chose to forfeit the bout. And afterward, Cochran voiced his displeasure. He said he had been training and cutting weight the entire week and to not wrestle was extremely disappointing.

While it’s part of the sport, cutting weight is something that every wrestler has to think about week to week, requiring discipline with workouts and diets.

“You have to be smart about your proportions,” said 141-pounder Hunter Baxter. “We have to make sure that we’re proactive about making our weight and keeping it down.”

Maryland, like other NCAA teams, weighs in before each dual and each wrestler has to hit their weight or be under to wrestle at their respective class.

While in the weight room or practice room during the week, the Terps focus not only on positioning and technical work, but also on other workouts to stay in shape physically.

Jahi Jones and Baxter have been practice partners this season, and to keep their weight, they often do their own separate workouts during practice.

“We have a ton of workouts during the week,” Baxter said. “During certain lifts, while everyone else is lifting, Jahi and I would have to break out and do a separate conditioning lift. Instead of lifting weights, squats or bench, we would do sled pushes and burpees just to keep our bodies moving for an hour.”

The other component to making weight is nutrition. Jaron Smith, while dealing with injuries, has wrestled at 184 the past few seasons.

In the offseason prior to this season, he decided to bulk up to 197, which he thinks has contributed to him staying healthy this campaign. That included a steady, consistent diet that he’s stuck to throughout the wrestling slate.

“I try to be very consistent with my diet,” Smith said. “It’s not like I’m very strict in terms of what I eat, but I try to be consistent. I wake up early enough in the morning so that I can eat before every practice. I try to eat a consistent lunch. Chicken, rice and broccoli has never failed me. I probably eat it like two, three times a day just about every day.”

It’s helped him avoid having to shed off pounds before weighing in, but there are weeks where he deviates from the norm.

Baxter hovered around 160 pounds coming into this season and, with a 5-foot-11 frame, it’s been difficult for him to maintain that weight.

Additionally, each wrestler has to make sure they are continuing to gain muscle and increase stamina for duals, which is tough to juggle.

“It’s pretty difficult because you need to be cognizant of what you’re eating,” Smith said.

Since getting to College Park back in April, coach Alex Clemsen has been working with the team to create good habits when it comes to nutrition and living a healthy lifestyle.

“The climate’s kind of changed in the sport over recent years for the better,” Clemsen said. “Kids are focusing more on being healthy and lean and strong as opposed to cutting weight and starving. It’s been a good adjustment.”

As he’s continued to change the culture around Maryland wrestling, Clemsen has created a Trust the Process-style system where, if everyone buys in, the program will continue to improve and grow.

The team is still working to get to that point, and getting on board with how to physically maintain oneself during the season is a step in the right direction.

Clemsen has tried to turn the program into a family, and with health and nutrition, he and the coaches have helped on the road when it comes to team dinners or helping different wrestlers grocery shop.

“They’re learning,” Clemsen said. “We do as much as we can to help them with that in terms of making healthy choices and learning how to fuel properly.”

The process is all about developing a routine — and once it becomes consistent, it’s one less thing for wrestlers to worry about.