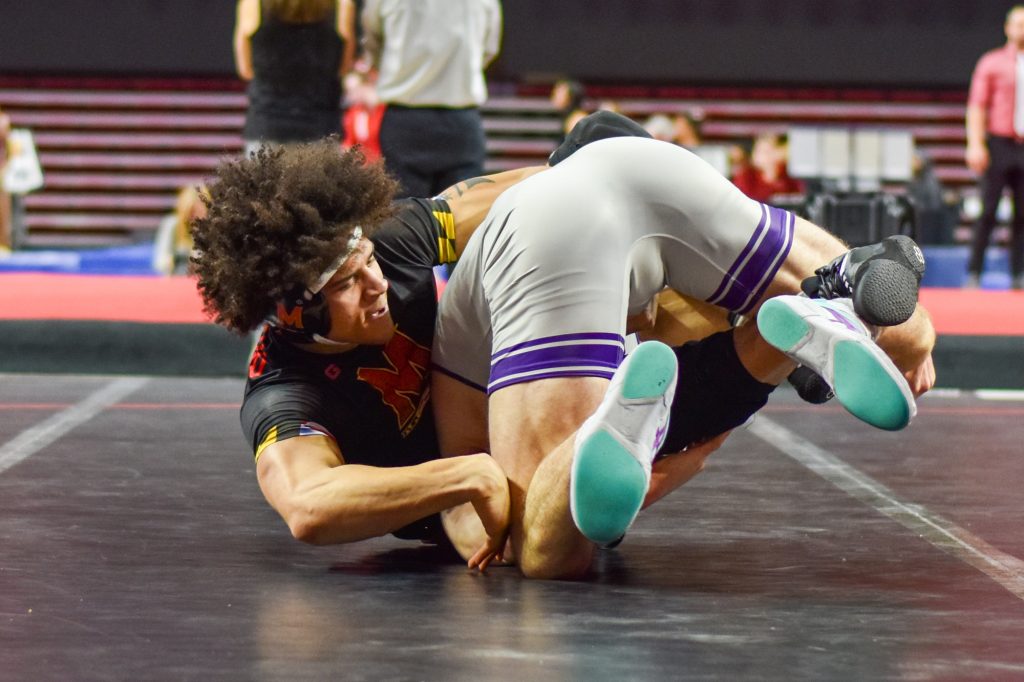 The lights dimmed on the main floor at Xfinity Center as the introductions commenced for the fifth annual Beauty and the Beast event with Maryland wrestling and gymnastics.

The former had something to prove in its last Big Ten dual of the season, facing a ranked Northwestern team with six ranked wrestlers in its starting lineup.

But once the introductions concluded and the lights turned on, Maryland wrestling didn’t, quickly falling behind in a 37-9 loss to the Wildcats.

Sunday’s dual started at heavyweight, with Parker Robinson and Jack Heyob both looking for their first dual win of the season. It has been a tough season for the redshirt freshman, and Sunday’s bout proved to be a prime chance to buck his struggles.

However, Heyob was on the offensive from the start, getting Northwestern off to a good start with an 8-0 major decision victory.

Things slowly spiraled out of control from there, but 125-pounder Brandon Cray battled closely with No. 10 Michael DeAugustino, landing a late takedown in an eventual 6-3 decision loss.

Just before the intermission, the Wildcats solidified their lead for good, landing two straight pins in the first period, starting with No. 5 Sebastian Rivera at 133 and redshirt senior Alec McKenna at 141.

Despite a team point deduction in the 149-pound bout between No. 18 Yahya Thomas and Ryan Garlitz, Northwestern had a comfortable 22-0 lead going into the break.

At 157 pounds, No. 1 Ryan Deakin made swift work of Lucas Cordio, pinning him within two minutes into the first period of their bout.

With loud music blaring over the Xfinity Center speakers, it was difficult for the coaches on either side to relay anything to the wrestlers on the mat.

However, the Wildcats didn’t seem fazed, recording bonus-point victories in five of their first six bouts of the dual, including three pins.

One of Maryland’s better shots at a win was 165-pounder Kyle Cochran, who had a tough task in front of him, wrestling No. 18 Shayne Oster. Cochran was down 6-3 as the third period was coming to a close, but Oster was too much for the redshirt sophomore, winning a 9-3 decision.

Maryland’s breakthrough came at 174 with Philip Spadafora, who has had his share of ups and downs this season. Spadafora had an opportunity against true freshman Ankhaa Enkhmandakh, who came in with an 0-1 dual record.

Spadafora took advantage of the mismatch, getting an escape and a takedown on his way to a 4-0 decision, putting the Terps on the board at 31-3.

While unable to come back for a win, Maryland ended the dual on a positive note with 197-pounder Jaron Smith, who faced off against No. 16 Lucas Davison.

Davison, a redshirt freshman, made an uncharacteristic mistake against the redshirt junior Smith. After securing a takedown, he allowed Smith to escape.

And Smith immediately came back with a takedown of his own, getting Davison on his back and quickly landing a pin in 2:18, Maryland’s second win of the dual.

The encouraging signs at the end of Sunday’s affair will play a role in the program’s last two matches of the season, starting with George Mason on Friday night.