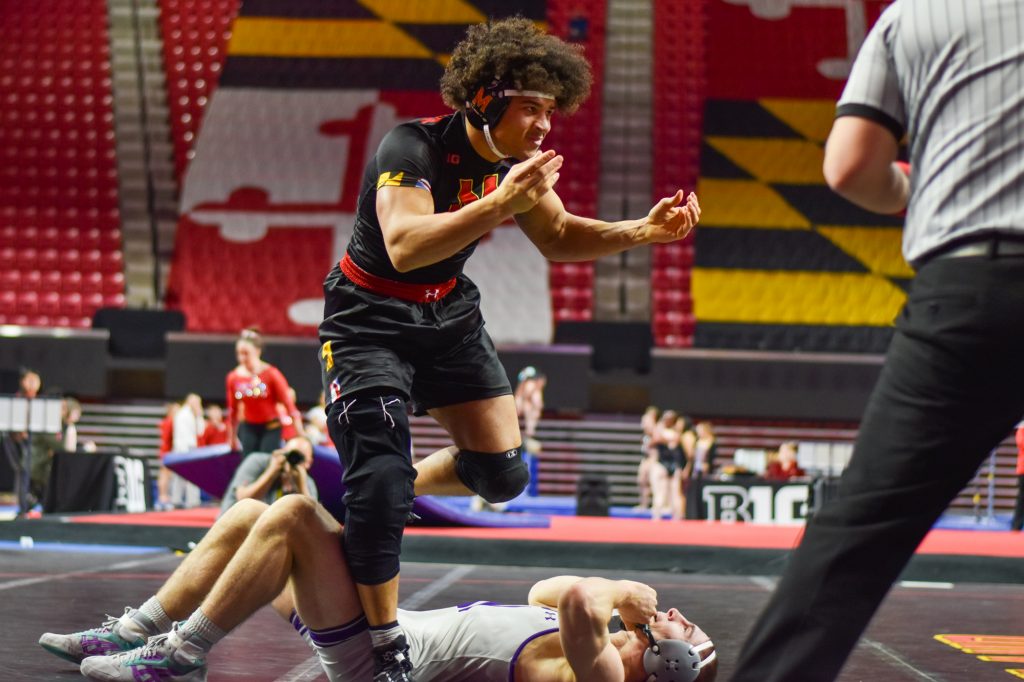 As Maryland wrestling waited to begin its dual against No. 24 Northwestern on Sunday, coach Alex Clemsen tried something different.

Having won the coin toss, Clemsen opted to start at the end. He had promised heavyweight Parker Robinson a chance to lead off a match, rather than his typical role of finishing up the dual for the Terps.

That meant 197-pounder Jaron Smith would close out the dual for Maryland. Against No. 16 Lucas Davison, Smith sent Terps fans home happy, landing a first-period pin in an eventual 37-9 loss against the Wildcats.

“It felt really good,” Smith said. “There weren’t too many positive things about the match, so just to be able to end on a good note for me and for our team.”

Maryland struggled against a Northwestern squad with six ranked wrestlers, getting pinned in three different bouts on the afternoon.

Sharing the main floor of Xfinity Center with gymnastics for the fifth annual Beauty and the Beast event, there wasn’t much for fans to cheer for — until Smith stepped onto the mat. He pressed the advantage after escaping a Davison takedown early in the first.

Smith came back, landed his own takedown and went to work, putting the Wildcat immediately on his back and eventually securing the pin.

“I was just really excited,” Smith said. “My family in the crowd, the fans, they were looking for a moment to get really excited for, especially given that it was a joint event. I was happy I could give the fans, my teammates, something to cheer about in the end.”

After getting the fall, Smith got up to his feet and gestured to his teammates and the fans, pumping the arena up.

“It’s good for Jaron. It’s good for our team to end on a positive,” Clemsen said. “He’s had opportunities to do that for us in other matches and didn’t quite get it done, so it’s good to see him get back on track with that.”

Aside from Smith’s pin and Philip Spadafora’s 4-0 decision win at 174, it was a day of struggles for the Terps — and not one Clemsen expected, given the team’s practices during the week.

With two duals left and the postseason beginning on March 7 at the Big Ten Championships at Rutgers, Clemsen’s squad is still attempting to find consistency.

“You just need to be a better version of you, and I don’t think our guys quite grasp that yet,” Clemsen said. “We’re learning. … Everything is a learning process, and we’re a little behind the curve on learning how to battle and fight some top-end talent.”

So, Smith was a bright spot, adjusting to wrestling in the final bout compared to the penultimate one — his normal spot in the lineup. On Sunday, Smith felt the wait time was about the same.

But the mental challenge was new, and he felt more than up for it.

“Finishing off is a lot different than going second-to-last,” Smith said. “Those are the kinds of things that are really exciting. … I look at it as another opportunity to score some mental points with the crowd.”