‘Hot Ones: The Game Show’ and the magic of Sean Evans 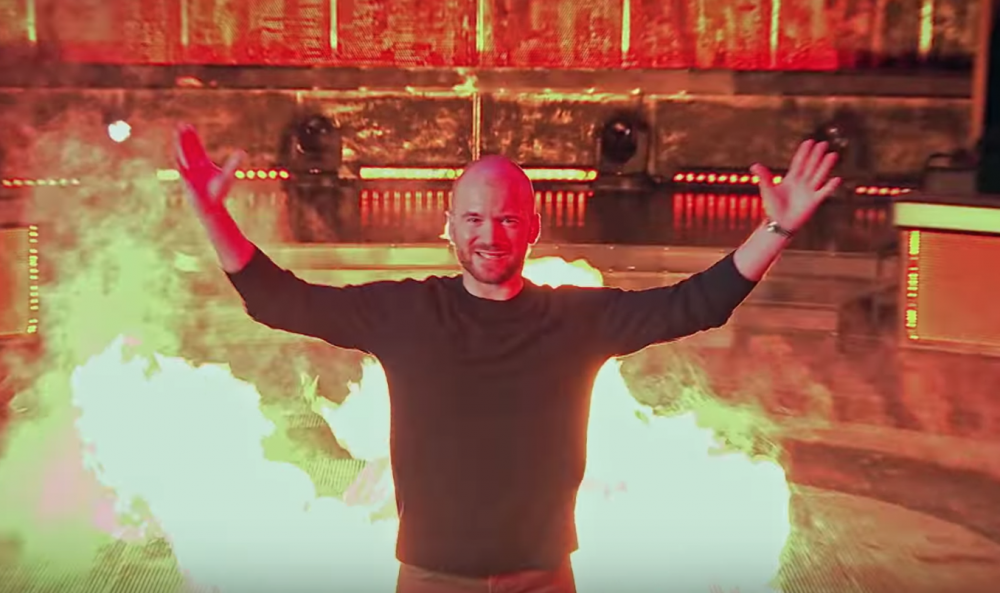 Sporting his usual bomber jacket and beautiful bald head, the internet’s favorite spice lord Sean Evans graduated to television Tuesday night as he hosted the series premiere of TruTV’s Hot Ones: The Game Show, a spin-off of the popular YouTube series and a massive step forward in the five-year existence of the concept.

The internet-only show first aired in 2015 with a simple concept — famous guests eat chicken wings coated in progressively hotter hot sauce while fielding questions. The Complex-produced show took off from there, gaining popularity, attracting bigger guests and even producing their own line of sauces. It’s now in its 11th season.

You’re likely familiar with the show, even if you’ve never sat down for a full 20-some minute episode. The Idris Elba coughing clip, the hilarious Shaq licking-the-wing bit and the widely-applicable Paul Rudd “Who would’ve thought” meme all originated at the Hot Ones table.

Though it seems like an intriguing enough concept, the hot sauces are not the sole reason for the show’s success — Evans can take a lot of the credit. A Howard Stern fan, Evans knows the power of the interview and takes his job seriously by crafting deeply-researched questions. His style has become an inside joke among fans, prompting parodies and compilations of guests being wowed by his interviews.

Friend groups across the internet often do their own take on the show to see just how lethal the sauces truly are. Having been part of one of those renditions, I can assure you they are no joke. Even milk, the widely-trusted antidote, does little to cure the pain of the top sauces.

The concept — putting people through a painful scenario will yield good answers — is unique, and others have noticed. Comedian Kevin Hart launched Cold as Balls — where guests sit in baths of ice water on YouTube — in 2017, and James Corden’s “Spill Your Guts or Fill Your Guts” segment subjects guests to similar torture with disgusting foods.

The YouTube show is, by its own admission, low budget: an all-black set, two chairs, one table, occasionally a laptop, and twenty chicken wings — ten for Sean, ten for the guest. Fans who tuned in to TruTV on Tuesday night found the host now accompanied by a live crowd and massive digital monitors in the large circular studio nicknamed “The Pepperdome.”

Unfortunately, the show doesn’t really reinvent the already-stale game show format. There are two teams of two competing for $25,000, answering a variety of trivia and participating in a series of parlor games. The twist, of course, is the hot sauce. Players are forced to clean chicken wings drenched in a hazardously hot coating. The games become much more difficult as the increasing millions of Scoville units (the standard barometer for measuring food’s spiciness) is coursing through their blood.

It’s difficult for game shows, particularly those that aren’t already classics like Jeopardy!, to be done correctly or to really sit above a certain threshold in terms of entertainment value, so this iteration of Hot Ones is hardly appointment television. A game show like this doesn’t really appeal to the typical audience that watches YouTube videos, nor does it play to Evans’ strengths as an interviewer.

If Hot Ones on YouTube is Jackass meets Charlie Rose, as Ricky Gervais once said, then Hot Ones: The Game Show must be Who Wants to be a Millionaire meets Man v. Food. In short, it’s not nearly as good of a combination. Regardless, Evans and show creator Chris Schonberger have found themselves with an intirguing concept. Now they must see what else they can do with it.