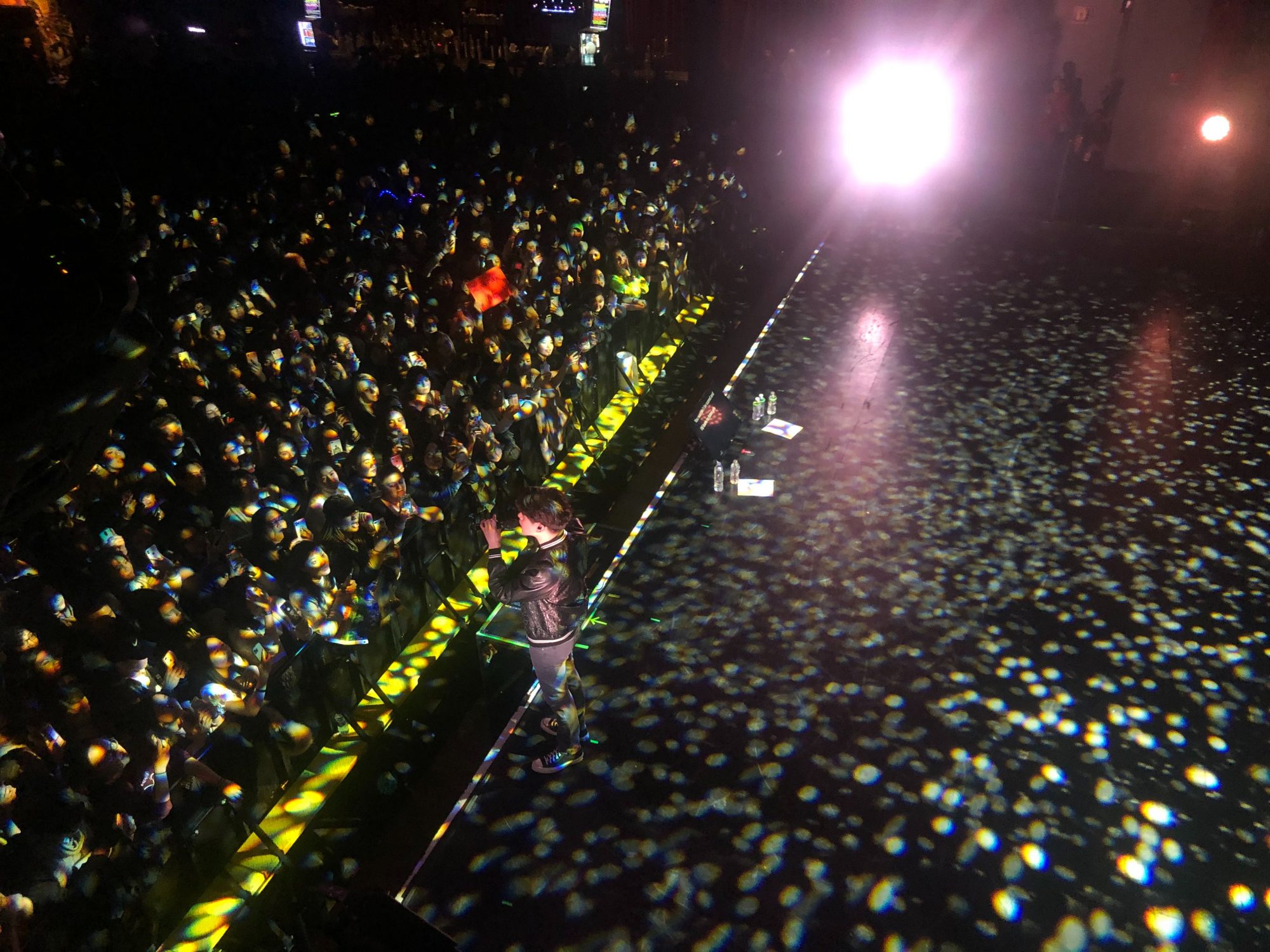 In a line covering the corner of Fenton Street and Colesville Road in downtown Silver Spring, a girl was balancing a water bottle on her head. She had her palm facing up, using an app to read the lines on her hands.

Behind her, a man and a woman discussed voter registration — where did their vote matter more? In Maryland, or in Florida? Did it matter at all?

A car passed by us, a person rolling down the window, screaming:

Then the guy nodded, and the car drove away.

At 7:45 p.m., the line started moving. As we got closer to The Fillmore Silver Spring, my toes got more and more numb, until I got inside — and I became numb as a whole.

It was then, and only then, as I took in the view from the balcony, the flashes of rainbow on the audience and purple light beams on the stage, that I realized: Eric Nam is here.

Then, it went all dark. And Phoebe Ryan, with a flowery pink dress and green hair, started to sing.

I had forgotten she was opening the show and, in a way, I’m glad I did — it felt like a nice surprise, like bringing spring to February. As I listened to her, I kept thinking about glitter, and it felt weird at the time. But now, it makes sense — her voice was metallic and colorful with sweetness.

She started the U.S. leg of the tour with Nam in San Diego on the first day of February. Sunday was her last stop. She pulled out her phone and placed it in front of her, asking the audience for a photo.

“My parents are probably wondering what I’m doing,” she said.

Ryan left the stage, and as she did, the lights went dark again. The honeyed and almost ominous beat of “Come Through” started to play — and what an opening for the show. Even before Eric entered the stage, I saw myself verses ahead:

“My heart is open, any moment you can walk in this room.”

My seat on the balcony was serendipity. I sat there at the last minute, after I decided that I wouldn’t like to be on the floor by myself. As I waited for the show to start, a mother, an aunt and a niece sat next to me. The mother talked to me for a bit about other K-pop groups. Then, the three of us, probably about the same time, realized something:

Our seats sucked. Even standing, we could only see the people in front of us.

So the mother walked to the end of the aisle, where the balcony was to the side of the stage, to see if the view was better. If it wasn’t for her, I wouldn’t have sat there.

At this concert, I saw people from different backgrounds and identities. I saw men and women twice my age and ten years younger. I saw a girl on the barricade holding a sign that said “Eric please draw my next tattoo,” and a Maryland flag with his face on it. I saw so many colors, so much light.

And right there, I saw Eric.

I jumped with the same intensity as him, even though the people on the floor were only doing some soft headbanging. I sang the lyrics to songs I didn’t know I knew by heart, and mumbled in a language that was supposed to resemble Korean.

In each concert, Eric always promises to talk a lot.

“It’s my concert and I can do what I want,” he said. He read the signs and shamed us — “I’m not going to step on you. Gosh, this is an all-ages show” — and he was grateful for the parents that came along.

“There’s going to be a lot of body rolls. I hope you become a fan, too,” he said. But he didn’t finish the sentence and started laughing.

And he did, sticking his tongue out, giving the audience the biggest smile he could. He walked to the barricade, throwing himself against the audience, bringing the microphone close to him as he sang.

Then he walked back to the stage, and I felt a bright light illuminating the balcony. I wave and smile like crazy, and, in a moment that I refuse to believe was just a fidget of delirium, he smiles back.

[Read more: Review: Justin Bieber’s ‘Changes’ is all romance and no substance]

His voice live is different. It’s like every note is enhanced. The playful longing in “Come Through.” The tenderness in “Wonder.” The rejection in “Runaway,” and the sultriness in “You’re Sexy I’m Sexy.” It wasn’t just lyrics, rhythm and music. Each sentiment came alive, impersonated by Eric as if it was the only feeling he had ever felt. And in each track, he invited us to feel, too.

Before We Begin — both the album and the tour — were a celebration of every mess that comes with love: whether it’s a friend, a family member, a partner or yourself. It told a story, and it felt deeply human. As he started to sing “Love Die Young,” he asked us to raise our flashlights as it was the most personal song to him — but I have a feeling that the concert itself was, too.

His mother didn’t approve of his career initially, he told us. And she didn’t particularly like his body rolls.

“She told me ‘God is watching,’” Eric said. And to that, a girl raised a sign that said “Jesus is watching.”

Eric laughed, “I guess Jesus is, too,” he said.

And just as “Come Through” was the perfect start to the concert, “Congratulations” was perfectly suited for the ending. Not because of the humorous aspect of Eric saying to the audience, “You’re finally leaving,” but because it’s the end of a love story. It’s the last goodbye that has a little tongue-in-cheek to it, but still enforces the idea of moving on to the next chapter.