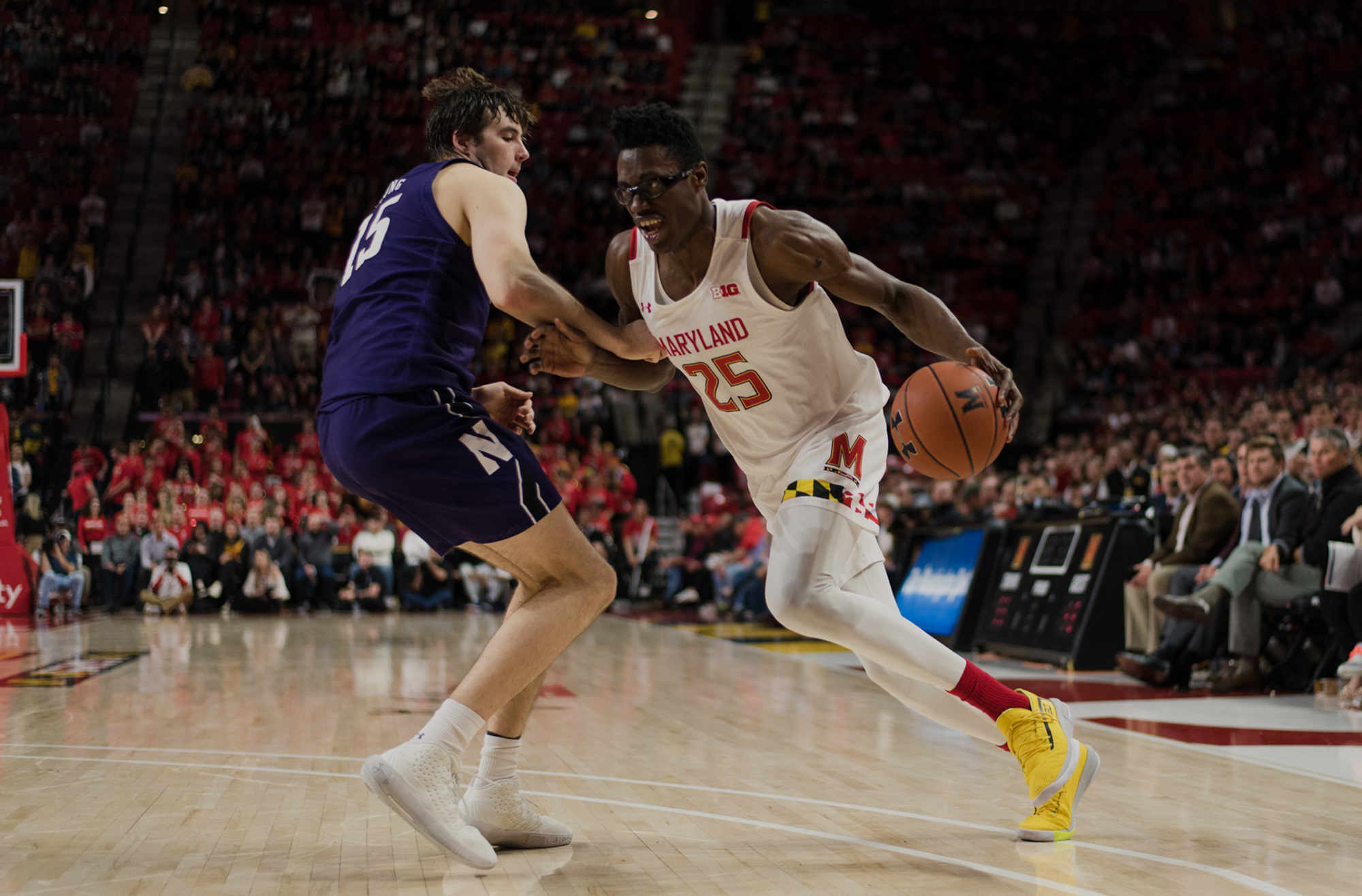 The last time these two teams met, a month ago in Evanston, Illinois, Maryland men’s basketball’s season seemed to change course in the locker room during halftime.

Facing a 14-point deficit, coach Mark Turgeon had a message for his players at intermission — a call to action of sorts, urging a team that entered the campaign with sky-high expectations to play up to them.

“This is the start of a new season,” guard Aaron Wiggins recalled Turgeon saying. “We can start right now at halftime.”

So they did. The Terps won that game, their first triumph in a true road environment this season. They’ve kept on winning since, against Iowa and Illinois and Rutgers and Michigan State, plowing past eight straight teams on a surge to first place in the Big Ten and No. 7 in the country. And on Tuesday, Maryland continued that run against the squad that may have started it all, beating the Wildcats 76-67 at Xfinity Center.

“I just want guys to relax. I just want them to relax and have fun,” Turgeon said. “I keep thinking our best basketball is still ahead of us. And we played pretty well.”

[Read more: In need of a clutch player, Maryland basketball can turn to Anthony Cowan again and again]

The Terps’ undefeated stretch began Jan. 18 against Purdue, a contest they nearly gave away in the closing minutes. Then came the first matchup with Northwestern, needing a roaring second-half comeback and forward Jalen Smith’s 25-point showing to pull away.

Since then, through all the close wins, Smith has been a constant. And on Tuesday night, with two first-half dunks in quick succession, the sophomore signaled he’d again be a centerpiece to much of the good things Maryland did.

It took Smith about 15 minutes to post his ninth straight double-double — which coincides with the Terps winning streak — and he finished with 22 points and 19 rebounds. Guard Anthony Cowan, whose 11-point burst to conclude Saturday’s contest against Michigan State kept that winning streak alive, fed Smith for his first posterization of the night.

Cowan lobbed down low to Smith, who had an inside position on his defender. Then, the Baltimore native turned, gathered himself and rose up strong, shrugging off forward Jared Jones’ foul and hanging on the rim with his left hand. Less than a minute later, Smith corralled Cowan’s lob and threw down once more, triggering a Wildcats timeout.

“I think everyone’s probably had enough of [Smith],” coach Chris Collins said. “He does this against everybody because he’s a terrific player. … There’s a reason he’s going to play basketball for a really long time and, health-willing, have a magnificent career.”

While Northwestern slimmed the edge to three points midway through the first half following a 13-5 stretch, back-to-back triples from guard Darryl Morsell and Wiggins pushed the Terps’ advantage back to nine. Guard Eric Ayala added to that with another trey just over a minute later, and Smith slammed a last-second alley-oop feed from Morsell to put his team ahead by 12 entering the locker room.

This time, the halftime speech wouldn’t need to be so fiery. Turgeon wouldn’t need to implore his team to turn its season around. But just last week, with a similarly comfortable lead at the break against Nebraska, Maryland let a Big Ten bottom-feeder climb back into the contest.

It took a late swat from Smith to preserve that 72-70 victory, as uncharacteristically poor defense allowed the Cornhuskers to outscore the Terps by 11 in the final 20 minutes.

And on another Tuesday night at Xfinity Center, against another meandering conference foe that’s lost 14 of its last 15 games, Northwestern whittled that advantage down to four at its lowest point.

“We just don’t get rattled too often,” Cowan said. “We knew they was going to go on a run, but we knew we just had to lock in on defense and our offense was going to come.”

[Read more: Against Michigan State, Jalen Smith again proved how crucial he is to Maryland basketball]

Like Maryland has done throughout this winning streak, despite the dry spells and comebacks from teams up-and-down the conference standings, it found a way to win.

On this night, as it has been so many other nights, the combination of Cowan — who passed Tom McMillen to become No. 8 on Maryland’s all-time scoring list — and Smith willed their team through.

With the Terps’ advantage down to six following a jumper from guard Boo Buie — who finished with six points for the Wildcats — Smith kept a possession alive with one of his career-high 19 rebounds. Then, with the shot clock ticking low, Cowan knifed through the lane and lobbed the ball to Smith to finish off.

“Every time we feel adversity,” Smith said, “we always step up to the challenge.”

And as the clock dipped below one minute, Turgeon let his emotions show — it wasn’t in the form of an impassioned halftime speech, like the one that led his team to a comeback win over Northwestern the last time they played.

Instead, after a Northwestern pass sailed out of bounds, Turgeon pumped his fists in excitement. There might’ve been moments of anxiety — particularly as the Wildcats narrowed the scoreline in the second half.

But Turgeon will take a ninth straight win, no matter how it comes.