Against Michigan State, Jalen Smith again proved how crucial he is to Maryland basketball 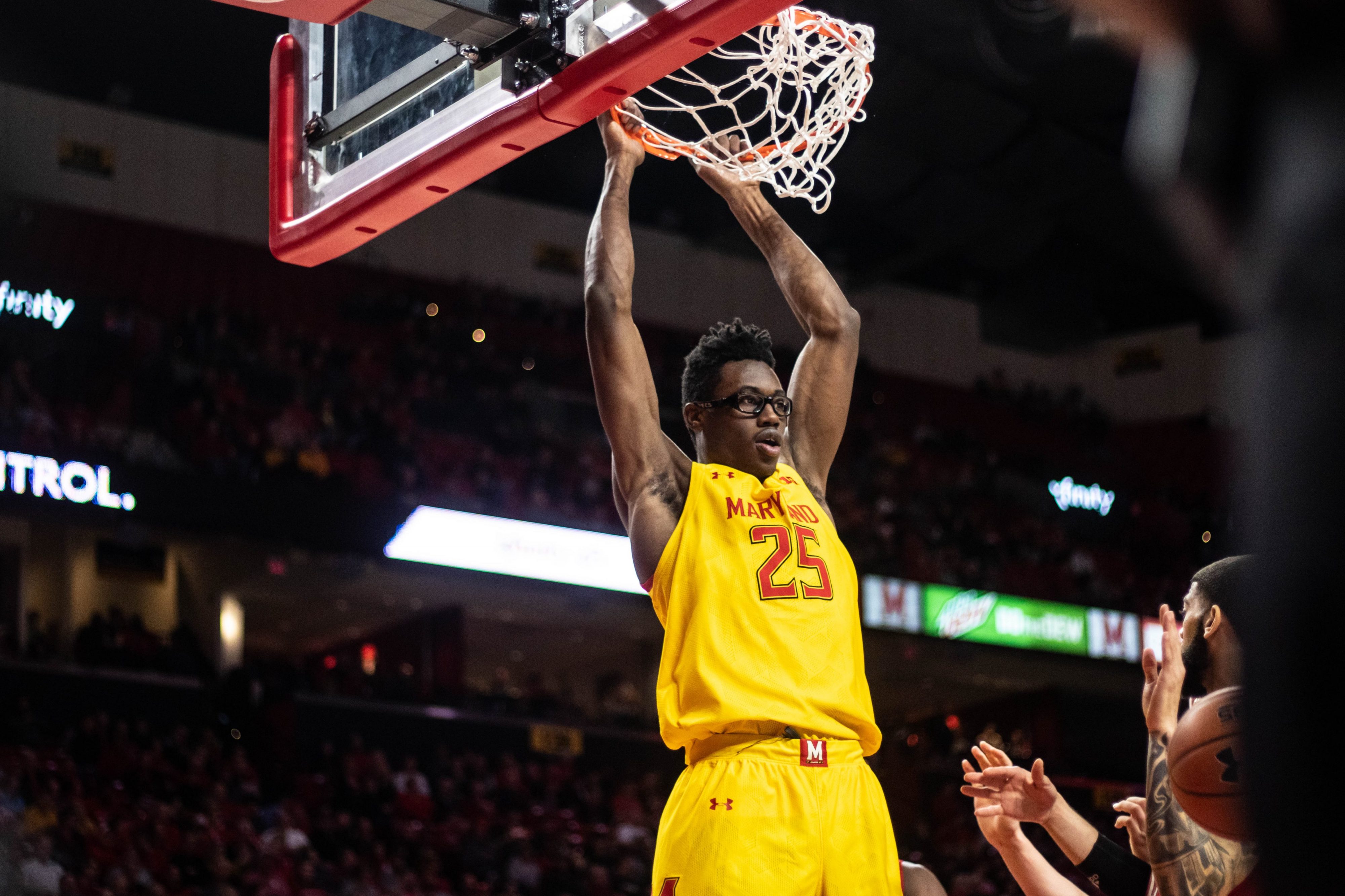 Jalen Smith has been a force for Maryland men's basketball, scoring in double figures in all but two of his 25 games so far in 2019-20. (Julia Nikhinson/The Diamondback)

EAST LANSING, Mich. — Of all the things Jalen Smith did Saturday night against Michigan State, it’s what he didn’t do that made it all possible.

When Smith picked up his second foul — a ticky-tacky moving screen — with 4:40 remaining in the first half, coach Mark Turgeon signaled to the bench. Forward Ricky Lindo entered, and toward the end of that four-minute span without Smith on the floor, the Spartans went on a 7-0 run to add a hint of doubt into an otherwise dominant opening period.

But Smith never drew a whistle in the second half, and that allowed him to stay on the floor for 17 more minutes. Guard Anthony Cowan sealed Saturday’s 67-60 victory with his 11-point burst at the end, but for all intents and purposes, it was Smith’s ability to score early in the half that ensured things didn’t get away from the Terps.

And it was Smith’s clutch 3-pointer late and his help defense on guard Cassius Winston that allowed Cowan’s three straight triples to capture the headlines from a big-time road win at the Breslin Center. All because Smith didn’t foul.

“When he’s on the court, he’s always a force you have to deal with on the offensive end, defensive end,” Cowan said. “He was huge for us; they would’ve scored some big buckets down the stretch.”

In a first half that included two missed dunks, Smith didn’t make much of an impact. But once he stepped out of the locker room for the final 20 minutes, the 6-foot-10 sophomore gave Maryland a lifeline. Smith scored the Terps’ first three baskets after Turgeon called a timeout one minute after intermission to settle down his side, and the big man posted 10 of the team’s first 12 points.

Then he hit that all-important three, the one that ended Michigan State’s 12-2 run — which saw the home team’s lead balloon to seven points — before triggering a 14-point swing in the other direction. After Smith’s long distance make, Cowan did the rest, turning a seven-point deficit into a seven-point advantage and an all-important road victory.

“Whenever you can come into this building — which I think is one of the best buildings in the country — and beat one of — I think — the best coaches in our generation, it’s exciting,” Turgeon said. “And the way we were able to win it was fun.”

Cowan made the shots, but so much of that ending in East Lansing came down to Smith’s defense on Winston, a player nine inches shorter than him — and all the quicker.

With six seconds left in a seven-point ball game, Winston sprinted up the floor anyway. Smith met the Spartans guard at the logo and tracked him all the way to the wing, arms outstretched, feet shuffling, not letting Winston make a meaningless shot or pass the ball away. The Baltimore native had done that to Winston — the Big Ten Preseason Player of the Year — for much of the final few minutes.

It’s a skill that stems from one-on-one sessions with Cowan this summer, when the senior guard would challenge the Maryland forward with matchups such as Saturday’s in mind.

“You gotta be able to step up and guard guards,” Cowan told Smith.

And Smith stepped up, helping hold Winston to just one shot — a miss — in the final three minutes. Postgame, Winston admitted Smith’s reach made it hard for him to find any open looks from beyond the arc, closing down space rapidly and showing enough lateral quickness to pester the guard.

But Smith was able to be in those positions — carrying a languid offense after the break, guarding one of the silkiest shooters in the conference — because of what he didn’t do. Without Smith on the floor in the first half, forward Xavier Tillman had his way down low and Michigan State made a run.

So Smith knew he couldn’t afford any more fouls, potentially limiting his minutes in the game.

“I knew my team needed me on the floor,” Smith said.

His team did. And Smith was there for them.