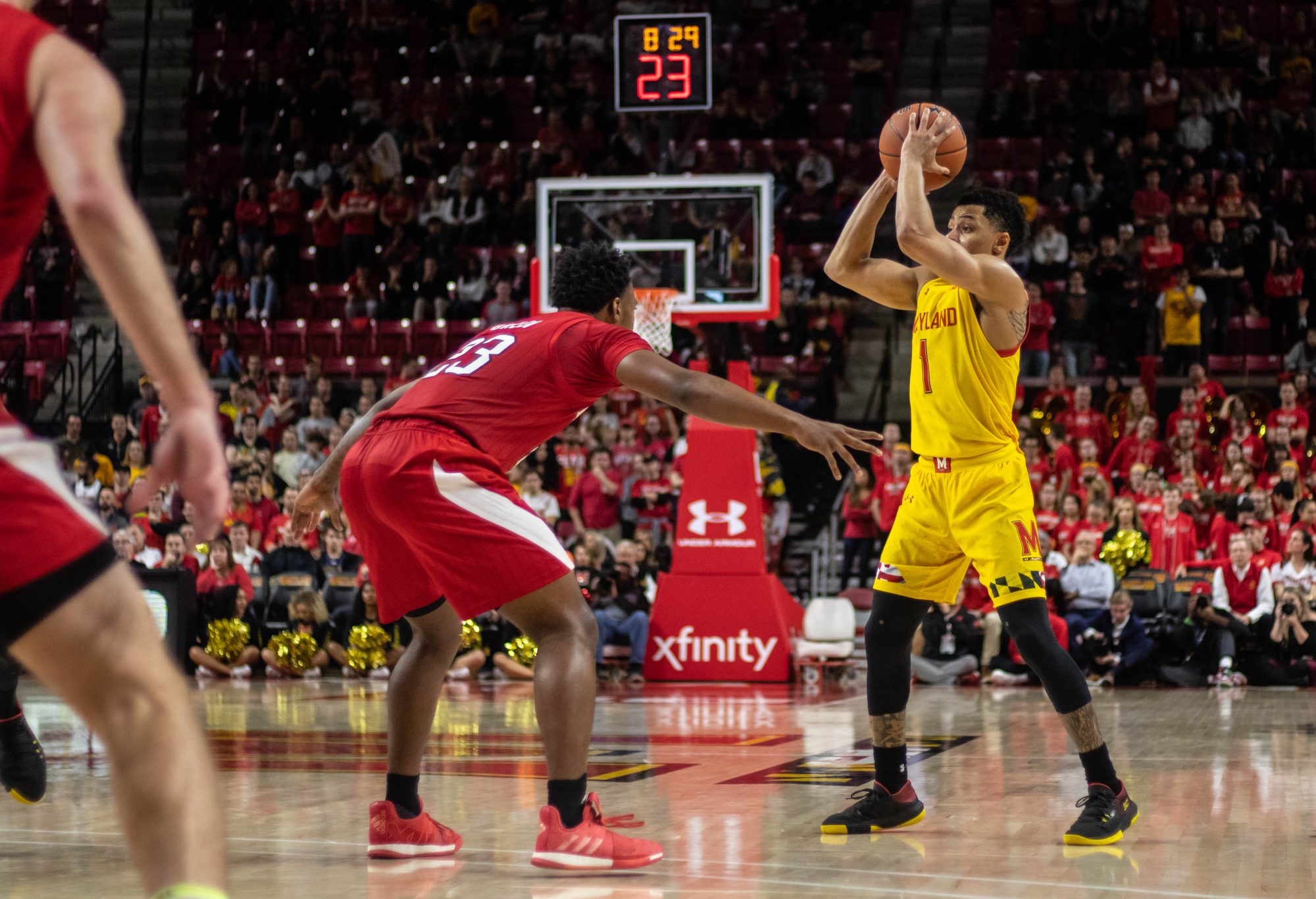 EAST LANSING, Mich. — Maryland men’s basketball learned something here last year. Even with a top-15 ranking beside its name, it didn’t belong with the likes of Michigan State — not yet, at least.

“[They] let us know how far we were from being elite,” coach Mark Turgeon said in the buildup to Saturday’s contest.

Back then, it was the No. 6 Spartans who ran the Terps out of Breslin Center, 69-55, and held guards Anthony Cowan and Eric Ayala and forward Jalen Smith to no more than seven points each. Back then, Turgeon’s team was one of the youngest in the country, and they allowed five Michigan State players to score in double figures.

Back then was over a year ago, though. This Maryland team is different than that Maryland team. And when Cowan pulled up three times from long distance during the final three minutes of Saturday’s affair, all three fell through.

Maryland had done its utmost to blow Saturday’s matchup at the Breslin Center, surrendering a 15-point edge before trailing by seven with 3:24 remaining. But the Terps didn’t roll over, didn’t give way to the hyped-up green-and-white crowd around them. That might be the biggest difference between that team and this team, the one that looked out of its depth and the one that managed to win its fourth straight road game, maintaining sole possession of first place in the Big Ten.

“They’re a lot tougher team,” Spartans guard Cassius Winston said. “Years before, we kind of just played harder than them, you could kind of see them fold a little bit. This year, they punched us in the mouth.”

Even just a month earlier, a finish like Saturday’s might’ve gone differently — it did in a two-point road loss against Wisconsin, a game where Turgeon’s squad surrendered a second-half advantage at the buzzer. That’s when the Terps were winless on the road, and that seemed to nag at them.

But in the month since then, Maryland’s done nothing but win. Turgeon’s squad got the road monkey off its back against Northwestern and Indiana, and then it dispatched a ranked Illinois team away from home to obtain first place in the conference.

And Saturday, to snag their eighth straight victory, the Terps managed to edge out Michigan State the way they’ve done often throughout this winning streak — with the ball in their best players’ hands as the game clock ticks down to zero.

“We’re not great, but we’ve gotten better in some of those situations,” Turgeon said. “And we stopped listening to all the noise and now we just believe in ourselves.”

[Read more: Maryland men’s basketball relaxed on defense vs. Nebraska, but that won’t work in the future]

Maryland earned its first win at the Breslin Center since 2014, and it becomes the third team this season to travel to East Lansing and leave with a victory — then-No. 10 Duke and then-No. 22 Penn State have done it, too.

These are the types of games the Terps need to win if they hope to seal the Big Ten regular-season title. They played up to their No. 9 ranking in doing so. Earlier in the season, Turgeon felt his unit might’ve been overrated, having done nothing on the court to earn a preseason No. 7 slot.

Maryland might be meeting those expectations now, and a lot of it comes down to its ability to battle back into games such as Saturday’s.

“Every time we come into a game, we’re going to give a fight, no matter what,” forward Jalen Smith said. “A lot of expectations were on us, and we just stepped up to them.”

It’s still just a Feb. 15 win, far from the unpredictable Big Ten and NCAA tournaments, where one slip-up can nullify all the good before.

He’s right. But games such as Saturday’s are necessary on the path toward bigger things. And with Cowan leading the way late, Maryland did what it might not have in past years — win in a difficult environment with the stakes at their highest.