No. 10 Maryland women’s basketball pulls away in second half to beat Penn State, 106-69 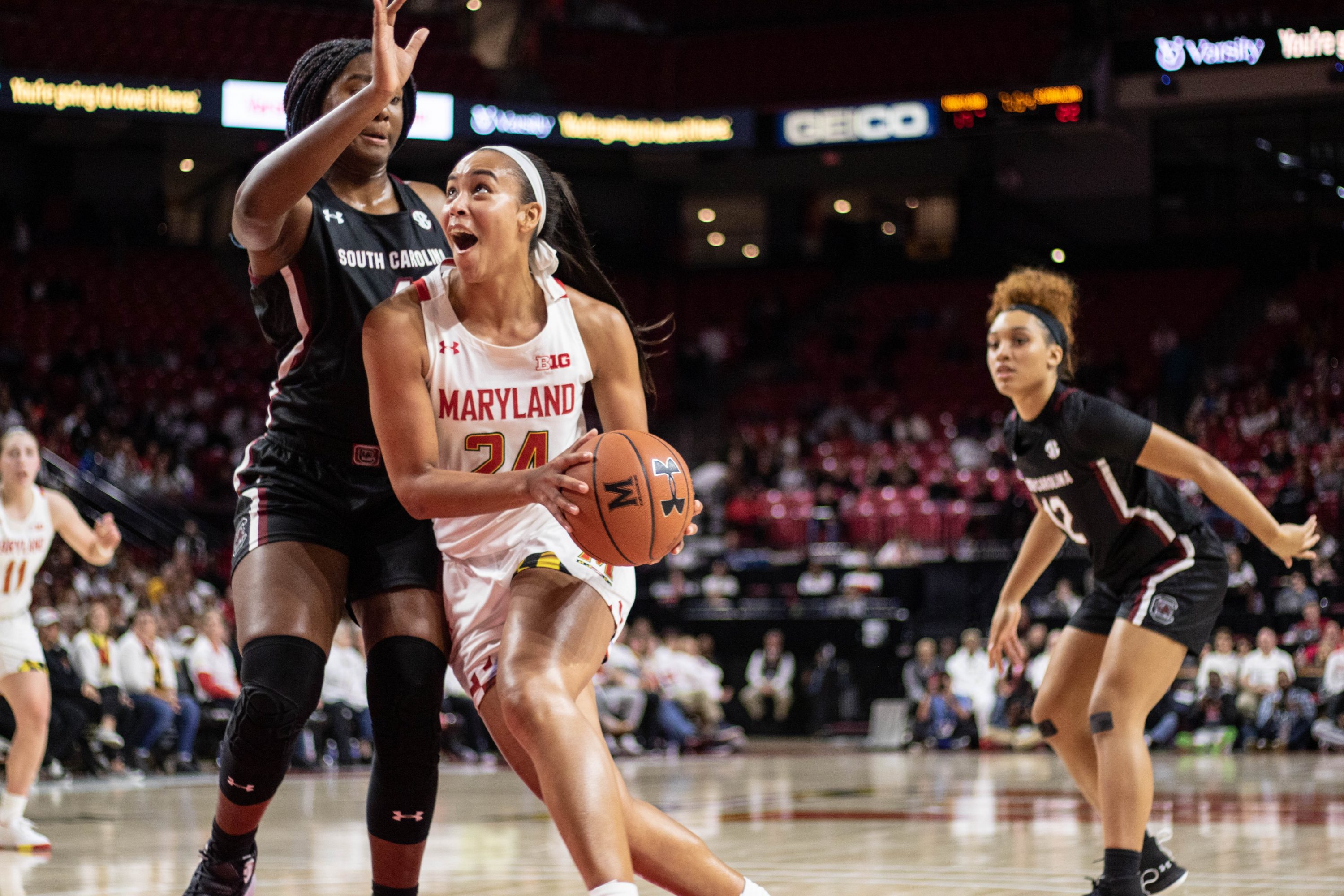 Despite its recent winning streak, Maryland women’s basketball looked far from the team that had been so dominant as of late, playing one of its worst halves Sunday since the team’s last loss at Iowa on Jan. 9.

So, with her squad struggling to keep up with a Penn State team sitting in last place in the Big Ten, forward Stephanie Jones put the Terps on her back. She dominated the paint when none of her teammates could find their rhythm, keeping Maryland afloat long enough before it finally came into form in the second half.

Behind her 21 points and 11 rebounds, both season-highs, the Terps won at Penn State on Sunday, 106-69, to earn its 11th consecutive victory despite a lackluster first half.

“Just felt like we weren’t communicating as well as we were versus Iowa. Just little stuff like finishing and making the right plays,” forward Shakira Austin said. “It really started with our defense, and once we realized that at halftime, we set out that we were going to fix it and it showed with the lead that we got.”

Neither team played like its record would indicate in the opening 20 minutes. Maryland came into the Bryce Jordan Center having won 10 in a row, while Penn State had done just the opposite with 10 straight defeats to its name.

The game was neck-and-neck throughout the first 20 minutes. The Terps played one of their worst defensive halves since the start of conference play, allowing the Lady Lions to shoot 60.7 percent from the field and get to the basket almost at will.

Maryland was able to get open looks offensively but often failed to convert. Guard Blair Watson missed four wide-open triples in the first quarter, and forward Kaila Charles — her team’s leading scorer — had zero points through the first two frames.

“We were disappointed. I thought we were really slow off of our rotations and off the bounce and off the pass,” coach Brenda Frese said. “We were definitely a second slow on everything.”

In addition to a strong 10-of-14 effort from the free-throw line in the half, Jones kept Maryland afloat. She took full advantage of her mismatches, often sealing the hopeless defender under the basket before converting the open layup.

It was a battle between Jones and Penn State guard Kamaria McDaniel. The junior energized the Lady Lions and seemed to always have an answer when it looked like Maryland was going to pull away. She tallied 15 points and five assists in the opening two periods and was the reason her team was down just one point going into the break.

“[We took advantage of] how aggressive Penn State is on defense,” Jones said. “They jump passing lanes, so we knew we’d have backdoors or just seals, and I think we did a good job of taking advantage of that.”

The fast-paced style resulted in the two teams combining for 91 points by halftime, but it’d be all Maryland in the third.

The Terps sent a message to their opposition with a 6-0 run to start the frame, forcing a Penn State timeout. The team locked in defensively and ran well in transition, a combination that the Lady Lions couldn’t keep up with.

Maryland shot 70 percent in the frame while holding Penn State to just 21.4 percent from the field. Charles led the way with eight points in the period, and seven Terps scored in the quarter.

They’d win the third period 30-11 to balloon the lead to 22 going into the fourth, finally playing the type of basketball that earned them first place in the conference just three days prior.

“I think [the] quick turnaround, early start,” Frese said about what contributed to her team’s slow start. “But I thought we finally got back to us, settled in defensively in the second half.”

The Terps continued to push the pace in the final 10 minutes, extending the lead to over 30 points and hitting shots seemingly at will. Penn State looked exhausted and committed numerous mental errors in the frame, including a backcourt violation that visibly demoralized the team for the remainder of the contest.

All nine Maryland players scored, and six notched double-digit points en route to the team’s 11th straight win. It wasn’t an ideal first half, but the Terps showcased how potent their offense can be when it’s fueled by strong defense.

[This game showed] our resiliency. Just our ability to stay lock-in or get locked back in to what we’re supposed to be doing and what we should be doing on the defensive end,” Jones said. “I think that’s really where it starts and I think that third quarter showed it because that led to our offense.”