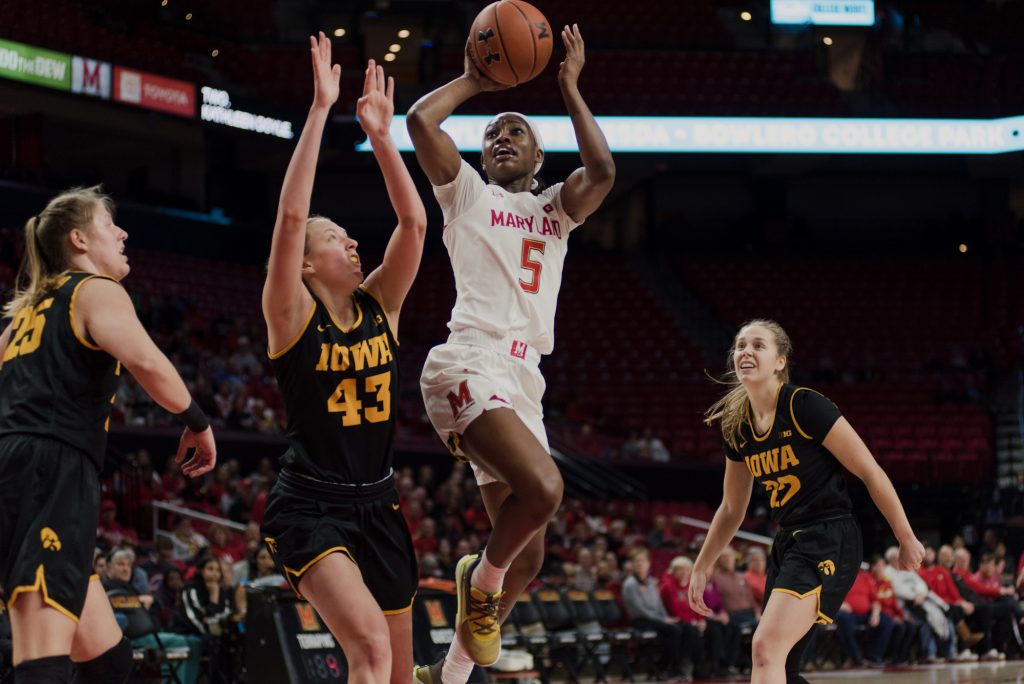 Forward Kaila Charles goes up over an Iowa defender for a shot during Maryland women's basketball's 93-59 win over Iowa on Feb. 13, 2020. (Gabby Baniqued/The Diamondback)

Maryland women’s basketball hadn’t tasted defeat since the last time it faced Iowa on Jan. 9. In the month since dropping that matchup, the Terps have rattled off nine straight victories, and they were prepared to send a message during a rematch with the Hawkeyes at Xfinity Center on Thursday.

Leading by three out of the first media timeout, guard Ashley Owusu once again provided the spark off the bench her team needed. She scored back-to-back buckets, one pull-up jumper and one acrobatic finish in transition. Guard Taylor Mikesell then capped the 7-0 run with her second triple, forcing a Hawkeyes timeout.

The game was all but over from there.

“Wow. That was a lot of fun. The thing I love about this team is they’re just a bunch of competitors,” coach Brenda Frese said. “This was the type of game I knew they’d be ready to play.”

After being left off ESPN’s list of the top 25 women’s college basketball players released earlier in the week, Charles looked as if she had something to prove to start the contest.

She came out of the gates firing, scoring her team’s first six points and setting the tone on both ends. Her offense helped the Terps overcome a couple of defensive lapses — which gifted the Hawkeyes open layups — and retain the early lead.

“I thought Kaila Charles shows she’s the All-American that she is. She set the tone from the tip,” Frese said. “I think she definitely showed who the best player in the conference is in this game.”

The rest of the team followed suit. Mikesell corralled a loose ball and stepped into her first triple, drawing an eruption from the crowd in the process.

Iowa hung around in the frame’s first few minutes, but Owusu blew the game wide open. Out of the media timeout, Owusu scored four straight points and her team’s defense began to lock in.

Maryland forced two shot-clock violations in the period and hounded Iowa guards with a trapping zone defense in the halfcourt, a change from its typical “12” defense that usually generates the majority of the team’s steals.

Once Owusu converted an and-1 with one second left in the period, the Terps knew it was their night.

“Ashley coming off the bench, she changes things,” Frese said. “She’s so dynamic … as a freshman in our league, I’d like to see who can match her.”

They built off their strong start to win the second quarter, 23-9. The Hawkeyes struggled to get open and handle the ball, committing seven turnovers in the frame as a result.

The Terps shot 55.6 percent from the field, hit four triples and forced Iowa into 12 giveaways in the opening half, earning a standing ovation from the home crowd as the team headed into the locker room with a 25-point lead and having played a near-perfect two quarters.

Forward Shakira Austin made sure there was no chance of a comeback coming out of halftime. The 6-foot-5 sophomore, in what is becoming a trend, continuously called for the ball in the post and put her height advantage to good use.

She scored 13 straight points to start the frame, hitting all five of her shot attempts and making plays on defense, as well. Austin eventually exited due to foul trouble, but her teammates fed off her energy and grew the lead.

Forward Stephanie Jones also came alive in the period, scoring six of her 16 on her way to a perfect 8-for-8 shooting night.

Owusu continued to orchestrate the offense in the third, tallying four assists in the period and finding cutters seemingly at will.

Her ability to quickly get out in transition pushed the pace of the contest beyond what the Hawkeyes could handle as they turned it over 11 times in the frame.

“Ash is a great passer. She’s a great point guard,” Jones said. “She’s always in attack-mode, so for her to not only get her shot but create shots for others is very important for us.”

A 36-point lead heading into the final 10 minutes allowed the Terps to cruise to yet another double-digit win — their fifth straight.

With five players scoring in double figures, the team scored the most points the Hawkeyes have allowed all year and held them to their lowest point total of the season en route to a 10th straight win and the top spot in the conference.

“I’m just so proud of … the courage [they’ve] taken from that loss on January ninth to where they are now. And it’s completely them,” Frese said. “[Today looked] like Maryland basketball. Defense, transition, offense sharing the basketball, and now it’s just seeing how elite they are that they want to keep building on this.”