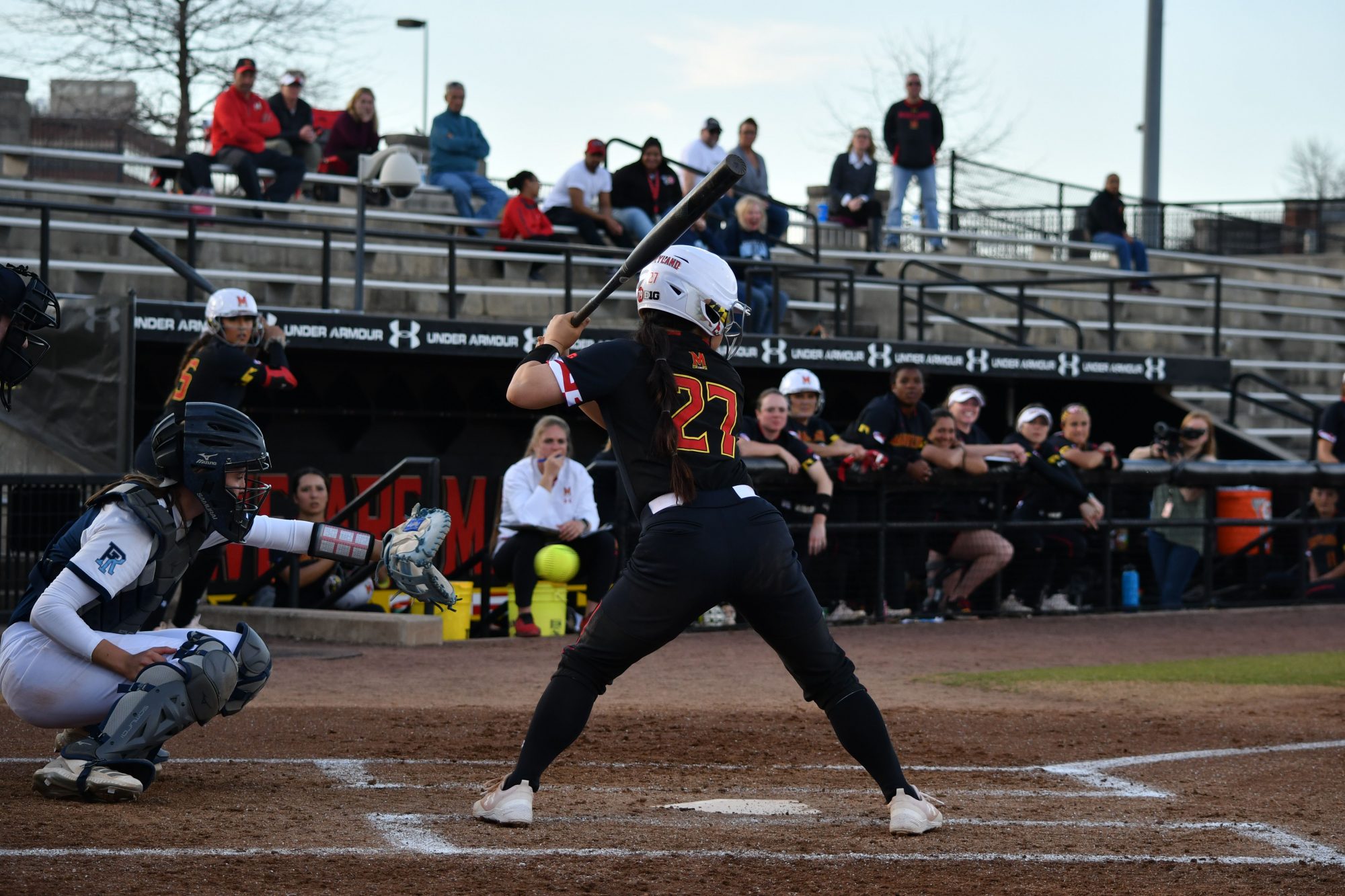 After a handful of lead changes and tied scores over the course of the first six innings Sunday, Maryland softball pulled ahead once more in top of the seventh.

Just one run separated the two squads heading into the bottom half, and with runners on first and second, Pittsburgh was creeping closer to nabbing the Terps’ lead as it had earlier in the contest.

But with two strikes against her, Panthers infielder LoLo Sanchez grounded out to third base, securing Maryland’s second win of the season in a close, back-and-forth game against Pittsburgh, 10-9, on Sunday.

Maryland looked like a different team than the one Clemson demolished in a 21-2 blowout on Saturday. The Terps had a season-high 14 hits and 10 runs. And infielder Taylor Okada had an impressive game with four hits and three RBI to help Maryland take home the win.

“This team has a lot of resiliency,” Okada said. “After struggling like that against Clemson, I think that it was nothing out of the ordinary for us to bounce back.”

Both teams scored in the first. Okada singled up the middle followed by a double by infielder Anna Kufta to push Okada to third. Infielder Taylor Liguori batted Okada in to strike first early in the game. Kufta stole home to push Maryland’s edge to 2-0 in the top of the first. The Panthers took advantage of a pair of errors in the bottom half to pull a run back.

The Terps’ bats stayed hot, though, and they added on in the second frame. With outfielder JoJo McRae and infielder Regan Kerr on base, Okada singled through the left side, scoring McRae. Kerr scored on a passed ball, giving the Terps a 4-1 lead — the largest edge they’ve held all season.

“Whether it be fielding or pitching, I think you’ll see us keep improving,” coach Mark Montgomery said. “You’re going to see us get better and better until we are putting great things on the field every time we go out.”

But the Panthers weren’t far behind. By the end of the second inning, they had roared back to go up 6-4.

The third frame was scoreless for both teams, but the Terps came back in the fourth after a two-RBI single from Okada tied the game at six.

Before her 2019 campaign was cut short by a knee injury, Okada hit at a .426 clip. Her 4-for-5, three-RBI effort Sunday was reminiscent of her success last year, but she still believes there’s more work to be done.

“I think there’s still a lot of growing to do. It’s been a long 10 months of recovery and I’m definitely glad to be back on the field, but there’s still more improvement that can happen this season,” Okada said.

The Panthers showed up in the fourth frame, as well. Four consecutive singles added two runs to the board, and an RBI single from Alley made the score 9-6.

After a scoreless fifth inning for both squads, Maryland tied the game again in the sixth frame thanks to timely hitting from Kufta, Liguori, catcher Gracie Voulgaris and outfielder Amanda Brashear.

In the seventh, the Terps took the lead once again when McRae scored on a wild pitch, putting them back on top, 10-9.

Maryland maintained the slim edge with accurate pitching from Trinity Schlotterbeck and strong defense behind her in the bottom half of the frame, throwing Sanchez out at first to grab their second win of the season.

After going winless in their first three contests of the ACC/Big Ten Challenge, the Terps were able to hold in on their final game, pushing their record to 2-7 on the season. Despite the rough series, Terps head coach Mark Montgomery is confident in the future of the team.