Maryland gymnastics bounces back with 195.750 against Rutgers 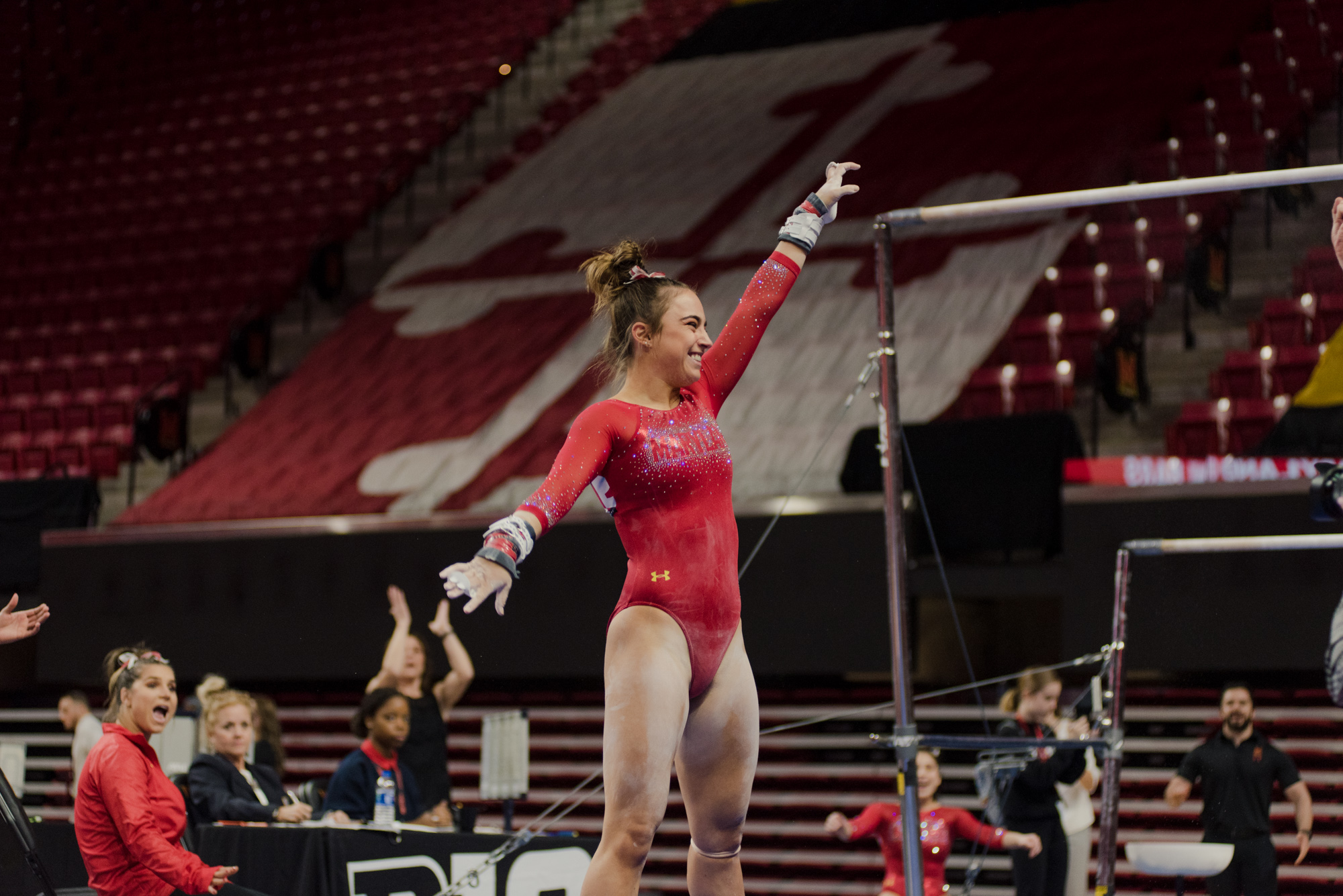 Freshman Reese McClure opened the third rotation of Maryland gymnastics’ Sunday afternoon meet with a career-high 9.850. Her score was the Terps’ highest of the day on beam, but she didn’t stop there.

McClure competed fourth on the floor rotation, and she once again shined by scoring the team’s first 9.900 of the afternoon. McClure’s high mark infused energy into the gym, which led to senior Tiara Wright’s meet-high 9.925 on the next routine.

“This is what we wanted, and this is what we needed,” coach Brett Nelligan said. “It was time to prove ourselves once again at home. I’m so proud of their resilience.”

The afternoon started with the Terps on vault. Though the event was Maryland’s best overall heading into Sunday’s meet, the team has struggled when it’s the first rotation. They got off to a hot start against Rutgers, though, with back-to-back 9.800s.

Thanks to five strong routines to open the event, they didn’t have to count freshman Aleka Tsiknias’ 9.325. Nelligan’s squad finished vault with a 48.925, taking a slight lead over Rutgers after one rotation.

“It was exciting; each routine got better as we went on,” McClure said. “Everyone was able to get the job done with clean landings and high scores.”

[Read more: To Brett Nelligan, being a “girl dad” is just as rewarding as coaching Maryland gymnastics]

Later, two falls on the uneven bars caused sophomore Sanya Glauber to score a season-low 7.400 for the Terps. But Glauber’s teammates were able to salvage the rotation with two routines above 9.800.

Senior Alecia Farina’s perfect dismount off the high bar electrified the Xfinity Center crowd before the Terps moved to the beam.

Maryland brought a lot of that momentum to the third rotation. In what had been their worst event before Sunday, the Terps put up a score consistent with other events. Wright executed a simple backflip off the beam to cap off her 9.800 routine, which helped her team score more than a point higher than Rutgers in the third rotation.

“It was really important for me to do well as the leadoff,” McClure said. “Then T [Wright] as the anchor also finished off really well to build up the team’s score.”

The Terps held on to a slim 0.975 lead before they started on floor, but they secured the win with a strong 49.150 in the final rotation. The all-around score was their highest since the first meet of the season.
They will face their toughest test of the season next Saturday when they travel to Toledo, Ohio, for the “Big Five” meet with four Big Ten foes.

“Coming off a big win and a big score, we want to get back in the gym and work hard,” Nelligan said. “Hopefully we can use this momentum going into Big Five.”