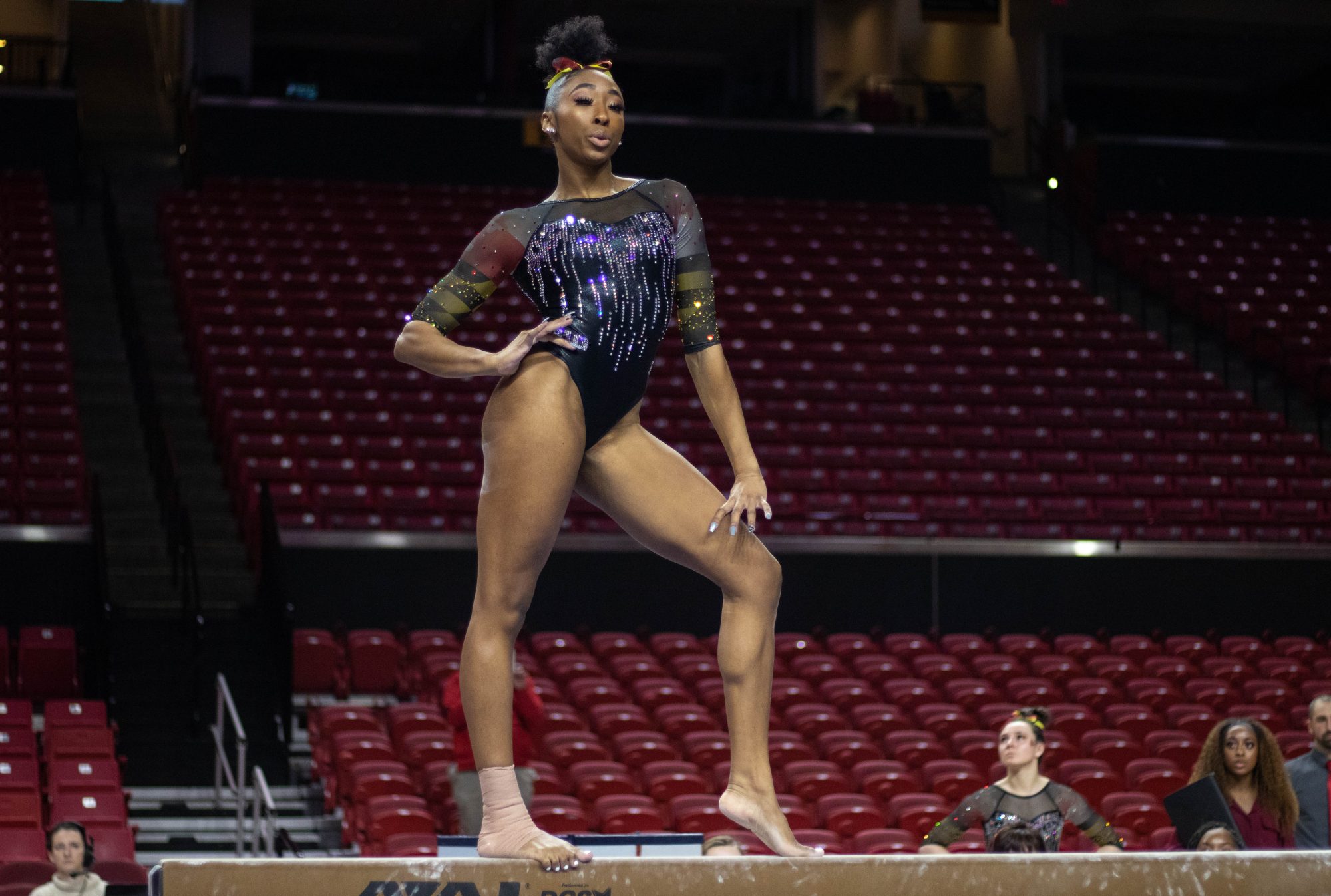 In three of the past four seasons, balance beam has been Maryland gymnastics’ lowest ranked event — including last year when the team ranked 30th in the country in all-around but 36th on beam.

So far in 2020, the woes haven’t subsided. Through five meets this season, beam has been the Terps’ lowest-scoring event three times — their last three meets. And although they rank 24th in the nation by overall score, they sit at 44th in the beam rankings.

On Sunday, Rutgers — which sits 18 spots higher than Maryland on beam — will come to College Park and provide a stiff test for coach Brett Nelligan’s squad as it continues to search for rejuvenation in the event that has plagued it lately.

“We have to get back to what we did in the first two meets of the year,” Nelligan said. “That’s slowing down, being really focused and being tight with our mind … They have to put it together on meet day, but it takes time.”

[Read more: To Brett Nelligan, being a “girl dad” is just as rewarding as coaching Maryland gymnastics]

The Terps have been working out on beam as usual the past few weeks, but they have yet to see results come to fruition in a meet.

Coinciding with the declining beam scores is the loss of junior Audrey Barber. Barber had one of the top two beam scores for Maryland in the first three meets of the year, but Nelligan’s squad has had to count lower scores as of late in the event.

Still, with more than half the season remaining, Nelligan believes the struggles can be resolved before the Big Ten championships. He points to the beam’s reputation to induce errors as a source of his team’s problems to this point.

“I think at times we’ve been really good, and our focus has been really tight,” Nelligan said. “But at times, we’ve let other things affect our focus. When the margin of error is small like it is on beam, that stuff shows up.”

Much of Maryland’s practice efforts on beam falls on the shoulders of assistant coach Erinn Dooley. A seven-time All-American at the University of Florida, Dooley has served as the Terps’ beam coach since 2009.

Nelligan has commended Dooley’s work with the team, and he’s noticed the work she’s put in to help Maryland buck its recent struggles.

“They’re doing great work in the gym on beam, and Erinn’s doing a great job with the beam team,” Nelligan said. “She’s constantly working with them on their confidence. She was a gymnast at the highest level, and she knows what it takes to be confident on the balance beam.”

The hours of training haven’t translated, though, and consistently low scores keep cropping up in the event. Gymnasts have been unable to pinpoint the disconnect, but this week, one mentioned that confidence might be at fault.

“We’re not as confident as we could be right now, but we’re looking to build that up in the gym,” freshman Emma Silberman said. “Hopefully, we’ll see all of our hard work this weekend.”

This past weekend against Nebraska, the Terps had their worst performance yet, dropping below 48 on beam for the first time this year en route to a season-worst 193.525 overall score.

As Maryland works on its confidence on beam, the team understands there are many variables out of their control. But Nelligan’s squad knows an improvement on the apparatus will pay dividends in its overall score.

“We want to do a good job with our gymnastics, then everything else falls into place,” Nelligan said. “If we put good routines together, scores will follow and the wins will follow.”