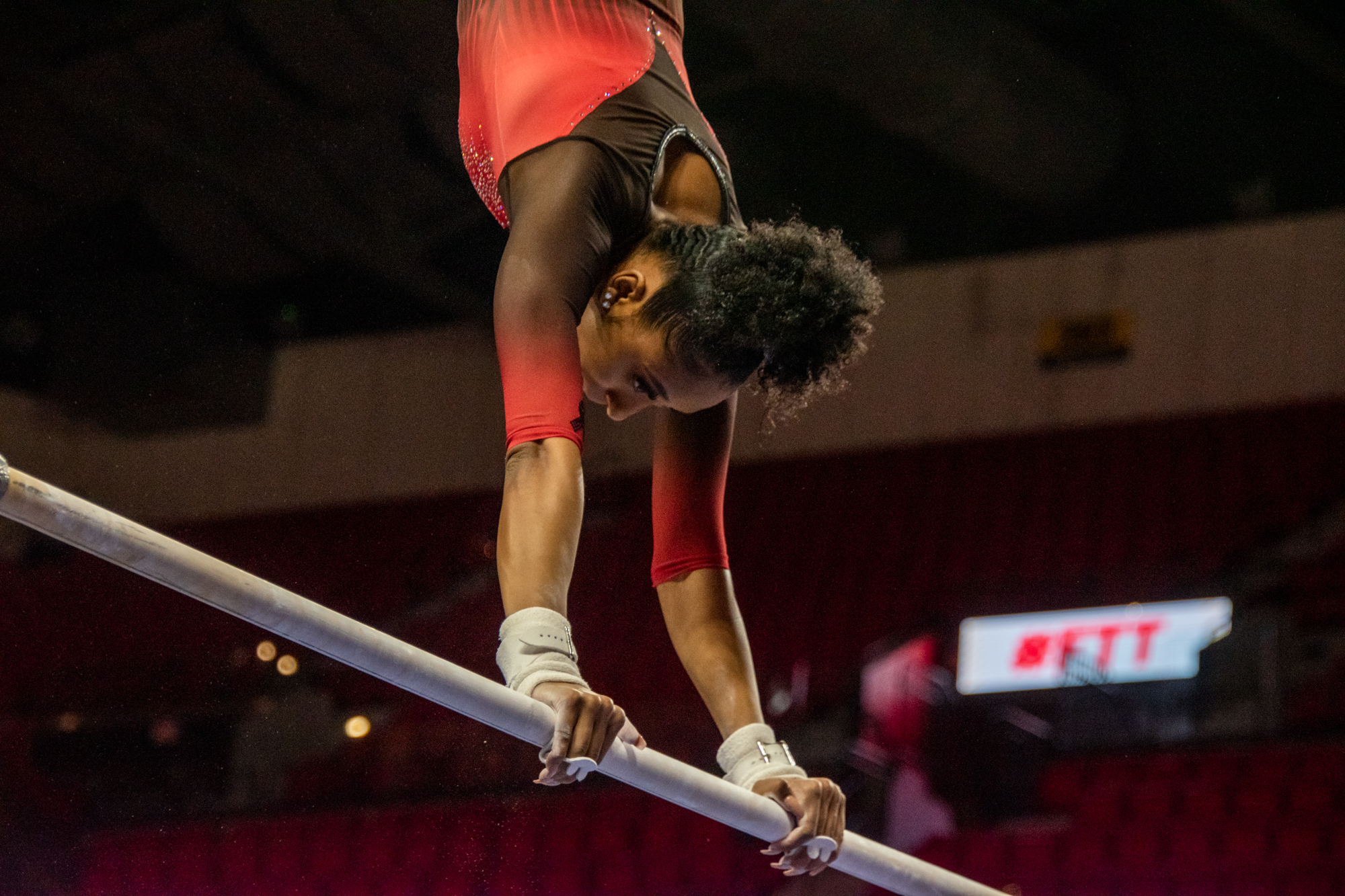 Tiara Wright performs on the uneven bars during the meet against Illinios at Xfinity Center on Feb. 2, 2020. (Joe Ryan/The Diamondback)

Senior Tiara Wright entered Saturday night’s meet at Nebraska averaging greater than 9.840 on the uneven bars, serving as one of the key contributors to Maryland gymnastics’ top-10 national ranking in the event.

But as the Terps’ fourth competitor on bars in Lincoln, Wright lost her form on an overshoot to the lower bar, forcing the judges to issue the senior a season-low 9.325 mark.

And Wright wasn’t the only one to struggle on bars, ultimately dooming Maryland to a season-worst 48.075 in the event. In what had been their best event all season, the Terps simply couldn’t piece it together in their first rotation Saturday. The negative result set the tone, leading to problems all night long for the 19th-ranked team in the country.

“That’s one of our best events, and it’s been stable for us all year,” coach Brett Nelligan said. “Having that rough start was surprising to us, and it took us a while to regain our footing.”

Following the uncharacteristic performance on bars, Maryland gave itself a chance in the second rotation. All but one gymnast scored above a 9.700 on the vault — but it wasn’t enough to mask the misfortunes of the first event.

“I thought we did a better job pulling it back together on vault,” Nelligan said. “But it was an off-night that started with the first routine … Once an event is done, we don’t want to carry it with us, especially if it didn’t go the way we wanted it to.”

The poor start in Maryland’s best event gave way to another shaky showing on beam — the team’s worst event thus far. The Terps entered Saturday’s match ranked 36th on the apparatus, with an average score of 48.638.

But they ended up lowering that figure against the Cornhuskers after finishing with a score of 47.875. It was the first time this season Maryland’s score had dropped below 48 in an event, with veteran leaders Alecia Farina and Sabriyya Rouse posting 9.025s.

[Read more: Without two key pieces vs. Nebraska, Maryland gymnastics is focused on what it can control]

Even though Maryland’s performance on beam was in the last event, the team could trace back the negative momentum swing to the bars. The Terps have prioritized not bringing a bad display with them to the next events.

“The leadoff position is super important,” sophomore Sanya Glauber said. “If something goes wrong, we definitely have to flip a switch and stand behind our team.”

Other gymnasts expressed similar sentiments after Saturday’s meet. The Terps acknowledged that it was an off day on bars, but they had high hopes of turning it around in their next three events. They didn’t.

“Everyone has their off days, but we don’t want to drag any negativity with us,” sophomore Alexsis Rubio said.

The event that usually carries Maryland was its downfall Saturday, and it resulted in its first loss in a dual meet this season. Nelligan’s squad will have a chance to reverse its fortunes on bars at home against Rutgers on Sunday.

Until then, the Terps want to make sure a bad event doesn’t morph into another loss and mediocre score.

“Once we move events, we need to keep pushing,” Glauber said. “After the first event, you can always come back. You can never think it’s over because it’s not.”