To Brett Nelligan, being a “girl dad” is just as rewarding as coaching Maryland gymnastics 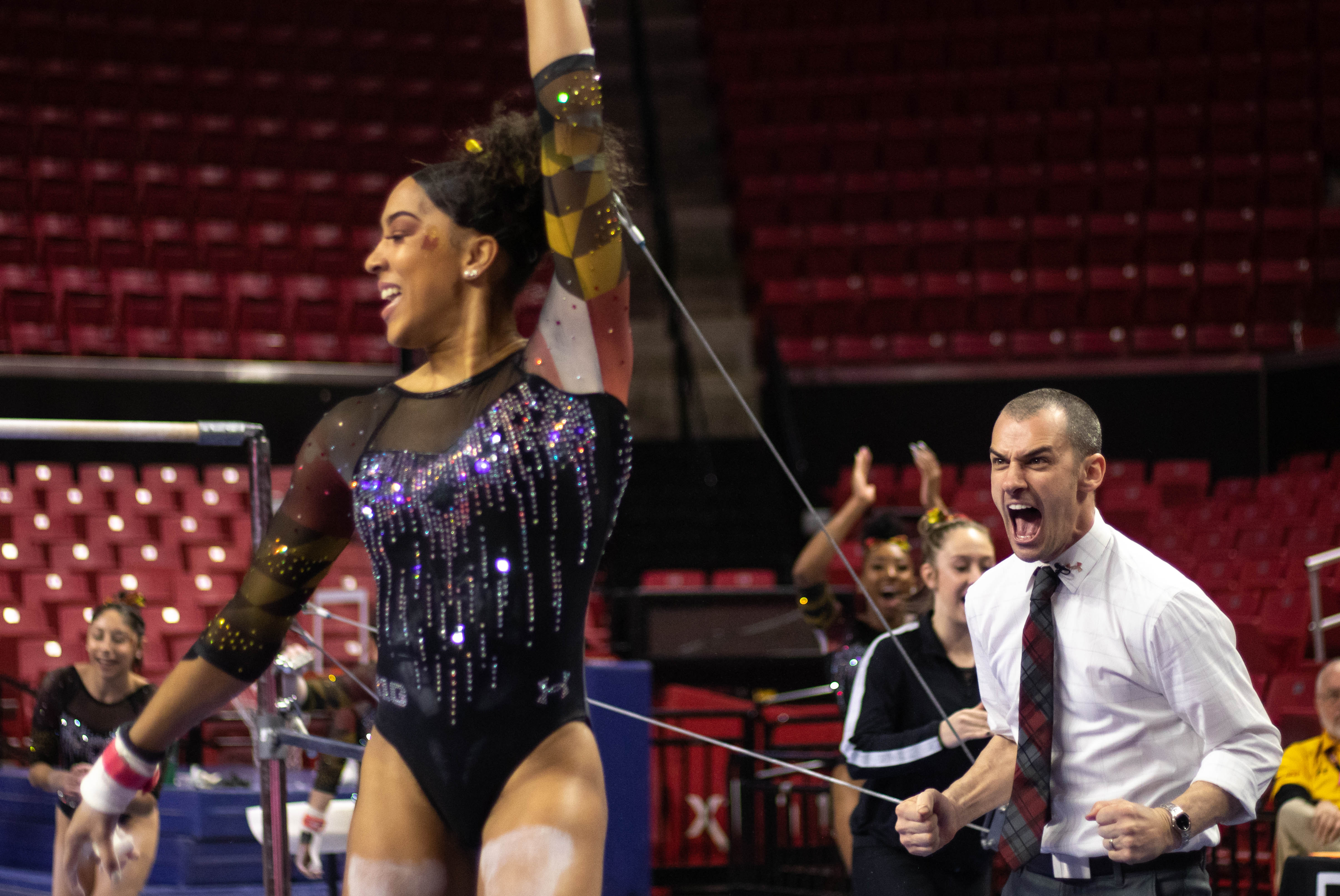 At the end of Maryland gymnastics’ home meets, coach Brett Nelligan receives two hugs while walking away from the mats — one from each of his daughters.

Taya, 4, and Riley, 2, aren’t bothered if their father’s squad scores under 195, or soars to a season-high. The pair spend a good amount of time around the team, often popping up at practices. The two sisters have even been known to make artwork for each member of the Terps before a big matchup.

Nelligan takes a great deal of pride in being a father of two girls, just as he takes pride in being a coach of 17 women. And in his 11th year at the helm in College Park — and his fourth as a father — he finds the two roles often overlap.

“I try to teach my athletes as if they were my own kids,” Nelligan said. “Over the years, my athletes have prepared me for fatherhood, and I think my kids are helping me be a better coach.”

Even before having children, Nelligan saw himself as a father figure to his gymnasts — vociferous in celebration and thoughtful in defeat.

While that relationship hasn’t changed in fatherhood, Nelligan gained a greater appreciation for just how much coaching would help with parenting.

“When you’re a coach, you understand how important the job is of mentoring young people,” Nelligan said. “What I never thought about was how much I learn from my student athletes about being a father.”

Nelligan’s gymnasts — coming to College Park from around the country — say their coach has made them feel comfortable at Maryland through a family atmosphere.

The team enjoys having his kids around at practices and meets, making their coach more identifiable. And while he maintains that coach status, many members of gymnastics view Nelligan as a father figure at the same time.

“He treats us just like we’re his daughters,” freshman Emma Silberman said. “We don’t get any special treatment or anything like that.”

Oftentimes during Maryland’s meets, Nelligan can be seen jumping up and down while pumping his fists. According to Nelligan, his girls have started to imitate his mannerisms, especially when the meets are broadcasted on television.

“They like to mock it at home,” Nelligan said. “I’ll come home and they’ll be fistpumping or they’ll do it if they see me on the TV. Taya’s got me down pretty good, but Riley needs to work on her form a little bit.”

Nelligan added that he and his wife haven’t put Taya and Riley in formal gymnastics classes yet, but he expects those days to come soon.

“I’m super proud of being a girl dad,” Nelligan said. “I think having daughters is the coolest thing ever, and I like being there for them.”