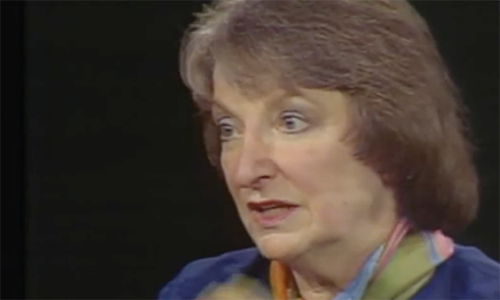 'What She Said' follows the life and work of the controversial film critic Pauline Kael. (Photo via YouTube)

As I became increasingly confused and disheartened by the film, I realized that if I was going to be honest in this review, I’d have to convince myself that criticizing the film does not mean I’m criticizing Pauline Kael.

Kael, after all, was an impressive woman.

Her opinions were unpredictable, her writing style uncouth. A positive review from her and your film was guaranteed some success, even if it had previously garnered poor attention. A negative review and your career could be sidetracked for some time.

Not only was she said to have made the careers of directors like Martin Scorsese and Steven Spielberg, but she elevated film to a new level — her writing was so impressive, some said her reviews could be more like art than the films themselves.

Kael was compelling, inspirational, creative. In many ways, she was everything this movie was not.

[Read more: I am a reformed Adam Sandler stan]

Because there aren’t many clips of Kael herself, the documentary interspersed footage of her with interviews of directors, actors and other critics. But the majority of the film consisted of Kael’s acquaintances discussing her life and Sarah Jessica Parker reading Kael’s writing over disorganized, random and often unidentifiable movie clips.

What was initially a clever idea turned out to be poorly executed. I found the rapid changes between movie clips and the ambiguity of what exactly I was watching unsettling. I couldn’t even figure out if these were movies Kael had reviewed or if they just matched thematically.

The different sections of the film didn’t flow smoothly together, adding to the disorganization. The topics were confusingly arranged, and the documentary lacked any sort of transitions. Director Rob Garver said this was done to mimic Kael’s writing style, which focused less on chronology and preferred to naturally follow topics as they arose, but all it did was leave me lost.

This method reminded me of Joseph Heller’s Catch-22, in how Heller would mention topics and elaborate on them in a circular fashion, leaving the reader (or, in this case, viewer) unable to comprehend meaning without having seen the whole.

Except, while Catch-22 succeeds, this movie fails — because a documentary should provide a holistic, clear explanation of the subject’s life, and not incessantly return to topics that were already mentioned numerous times.

One of these topics, which served as a theme throughout the documentary, was Kael’s experience as a woman who critiqued mostly male work. This was an interesting topic that merited mention, but it was poorly handled. A critic or actor would briefly mention it every 20 minutes or so, but not once was it thoroughly discussed.

The documentary also had several strange quirks that made it feel unrefined. Instead of saying important details of her life out loud, such as when she got married or bore a child, these were written on the screen as text. And almost every time, the words were on the screen so briefly, I couldn’t read them. It was also strange at the end that, when the interviewees were ruminating on how Kael’s form of film criticism wouldn’t work in today’s social media-focused world — which, in itself, was unnecessary and weird — they spoke over a running list of tweets from the documentary’s Twitter account.

The only thing that made the documentary more insightful than Kael’s Wikipedia page were the interviews with people in the industry whose work Kael’s writing inspired or advanced in success. These alone gave some light and color to the documentary.

There’s definitely a meta aspect to reviewing a documentary about a film critic, and I can’t help but think that Kael would’ve been just as dissatisfied with What She Said as I am.