Even after dominant win, Maryland women’s lacrosse focuses on what it can improve 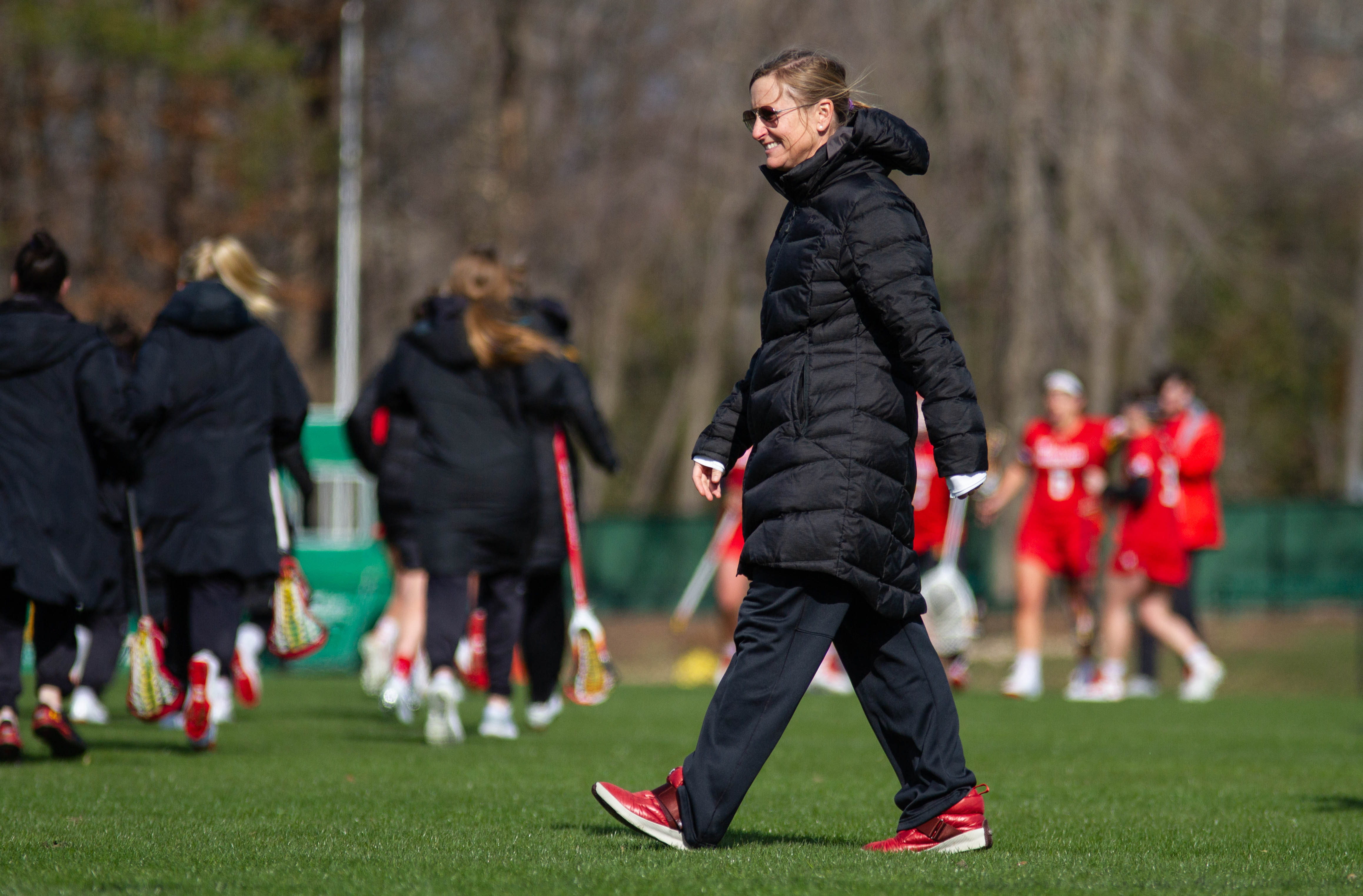 As Maryland women’s lacrosse prepares for its 2020 home opener on Saturday, obstacles out of the squad’s reach have been ever-present.

Rain in College Park has kept the Terps indoors more than they say they’d like, the defending champions are staring down one of the toughest schedules in the country — and, of course, coach Cathy Reese’s custom ice cream flavor at the Dairy momentarily went missing.

But despite the stumbling blocks, Maryland has spent its time preparing for No. 14 Florida by working on the parts of their game they can control. And ahead of its matchup with the Gators, the team analyzed what went wrong — even though most things went right — from its season opener against George Mason.

“In rewatching our film, we made a lot of errors,” Reese said. “These are things we can control and make a difference with.”

Reese’s squad didn’t shy away from talking about their shortcomings after their opening match of 2020 against the Patriots. The Terps pulled out a strong 19-6 victory, but it wasn’t without struggles on both sides of the field — particularly early in the match.

“We got all of the jitters out at the beginning, and after that we were really excited to be out there and just play lacrosse,” goalkeeper Maddie McSally said.

Maryland has already expressed confidence in its young defense despite small errors, although Reese believes the squad’s focus on those details should extend to the whole team.

“On the offensive side, we need to just move the ball a little more,” Reese said. “Move our feet more — you’ll hear me say that all season long; I’ll never be happy with that. We’re going to keep growing and keep getting better. That’s what we’ll spend time on, is the little things that we can control.”

Now, the Terps move on to a Florida team that opened its campaign with an 11-10 victory over No. 18 Colorado. Maryland beat the Gators in the second game of last season, 17-12, in Gainesville. At the time, Reese’s squad were ranked No. 2 and Florida slotted in at No. 6.

The Gators will be the first of four ranked foes in a row for the Terps, including away games at No. 2 North Carolina and No. 4 Syracuse. Maryland has a challenging road to defend its title, with 11 preseason ranked matchups, but the squad seems unphased by the pressure.

“Let’s go,” Reese said. “We’re ready for it. We’re nowhere where we want to end this season. We’re just getting started, but Florida is a really talented team. They’re tough, they play hard. … This is what we love. We want to challenge ourselves, we want to be better than we were last game, and this is an opportunity to do so.”

The Terps will have a chance to show off their progress against a Gators team that didn’t play a clean first game, ending the match with 14 turnovers. Maryland features a young core of defensive players, but Florida has shown it’s still working on its build-up play.

Saturday will also mark the Terps’ return to the Field Hockey and Lacrosse Complex after a season-long hiatus while the turf was being replaced.

“We love having our games here,” captain Meghan Doherty said. “Our field is a little bit different where we know the speed of our game here and we like having our fans right on top of us.”

Maryland played all of its home games at Maryland Stadium last season. The Terps have been a dominant force at home, with their last home loss coming on March 10, 2012 against Syracuse.

With all of the changes and hindrances surrounding the team — the indoor practices, the tough slate staring down at them — Reese said she’s happy with how the squad is progressing. Plus, her ice cream has returned to the Dairy.

“Things are starting to fall into place,” Reese said.