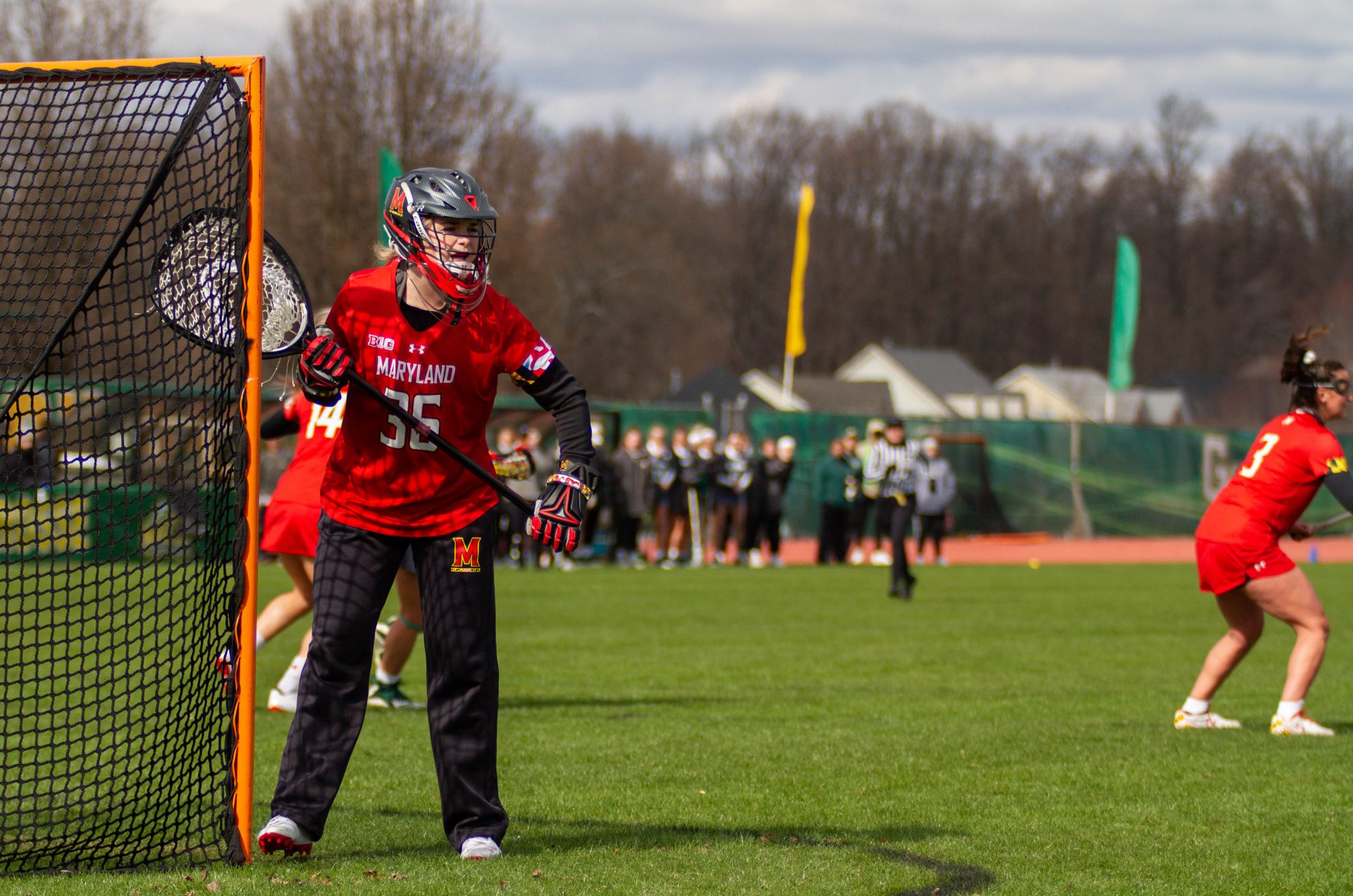 In the opening minutes of Maryland women’s lacrosse’s season, the Terps sat on the back foot, trying to thwart the ensuing George Mason attack.

And as Patriots’ attacker Hailey Johnson juked past defender Laurie Bracey, goalkeeper Maddie McSally was the only thing in the way of an opening goal.

Johnson raised her stick and rifled a shot toward the top corner. The sophomore was equal to it, though, planting her feet and saving the attempt with a raised stick.

The Terps would eventually find their footing, rolling to a 19-6 victory in McSally’s first college start. Similar inexperience was rife throughout Maryland’s lineup on Saturday, particularly in the defense. Yet despite the new-look backline, the team believes it’s headed in the right direction.

“We came out hard,” said captain Meghan Doherty, the only returning defensive starter from 2019. “With it being a young defense, it has been interesting to see what we bring together. We did a good job for our first game. We have a lot to work on. We watched film yesterday and saw the errors that are uncharacteristic of our defense. It’s all stuff that we can easily fix.”

[Read more: Catie and Libby May were a sister-scoring machine for Maryland lacrosse vs. George Mason]

The Terps lost most of their defensive power with the graduation of goalie and Tewaaraton Award winner, Megan Taylor, along with defenders Julia Braig and Shelby Mercer. Senior Lizzie Colson was set to return to the defensive line as a captain, but a season-ending ACL injury over the summer left Maryland depleted of veteran players.

However, in their first match, the Terps kept strong — at one point preventing the Patriots from scoring for over 21 minutes.

“Both of our goalies played well. We had some really nice stops and some good communication back there from them, which is what we ask for from them every game,” coach Cathy Reese said. “Meg Doherty did a great job leading the way down defensively. [She’s] our voice and our eyes and our anchor. We made a lot of mistakes, don’t get me wrong, we have a good foundation, a good point to grow from. But, I’m proud of everyone’s effort.”

Reese tapped McSally for her first start over junior Madison Hine and freshman Emily Sterling, who replaced McSally in the second half.

“I’m just excited to have the opportunity to play for Maryland and get the chance to go out there and be with my defense. They played awesome, and it was just really exciting,” McSally said.

Despite her youthfulness, McSally is used to following in Taylor’s footsteps — they both attended the same high school, Glenelg. In fact, Taylor gave McSally lacrosse lessons as a middle schooler.

“I’ve been learning from her for years,” McSally said. “She’s such a great role model and someone to look up to. Meg was definitely a huge part of me learning to become a goalie … It’s awesome to now get out there and play for myself.”

Taylor’s influence was on display throughout McSally’s 30-minute appearance, notching five saves in a composed and confident performance.

And the strength of Maryland’s netminding wasn’t lost on Doherty, who commended the goalkeeping unit for its depth.

“They step up and they are making saves that probably shouldn’t be made, especially when we play each other in practice,” Doherty said of the goalkeepers. “I feel super confident knowing I’ve got these three behind me.”

Reese praised the friendly, competitive edge between the three goalies in practice, and said she respects how the unit works together and hopes the rest of the team will follow suit.

“The key thing for our goalkeepers is that it’s a tough spot. Being a goalkeeper is tough. I wouldn’t want to do it,” she joked. “They bonded together well and they’re pushing each other and that’s what we want to see. We need to push each other to get better and not be content with where we are.”