With four goals in two games, Jack Brennan is a freshman gem for Maryland lacrosse 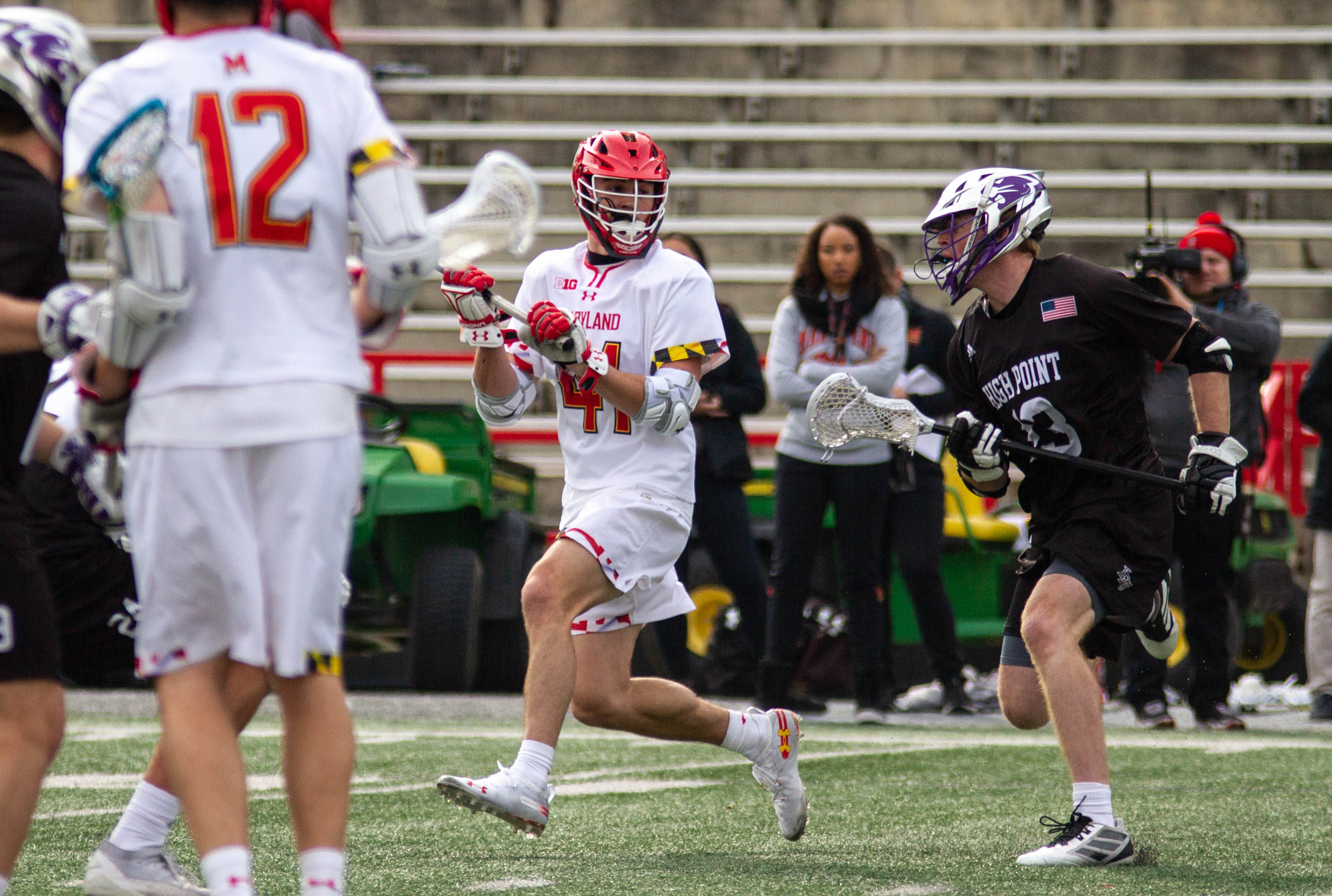 Jack Brennan has scored two goals in each of his first two starts for Maryland men's lacrosse. (Julia Nikhinson/The Diamondback)

Jack Brennan sauntered around the back of the attacking area, waiting for something — anything — to fall his way.

The Maryland men’s lacrosse midfielder had scored a goal three minutes before, and was desperate to see the net ripple once more — to bring his team within one goal on an afternoon in Richmond, Virginia, when the Terps were largely second-best.

So when attackman Anthony DeMaio’s pass found the Rochester, New York, native, he cocked back and fired. And once the ball flew into the top corner, Brennan turned to his teammates, fists clenched in excitement.

Off the field, Brennan paints a more reserved figure. But on it, Brennan is brash, tough, confident. And through Maryland’s first two games, the freshman has been a revelation, quickly adapting to the rigors of college lacrosse to serve as a goal-scoring force in the midfield.

“He’s a quiet guy,” attackman Jared Bernhardt said. “But we know every time he goes out there he’s going to give us 100 percent.”

Brennan, a former four-star recruit, came to College Park tethered to expectations formed while he starred at Irondequoit High School. There, he tallied 188 goals and 102 assists for 290 points — the second-most goals and third-highest total points scored in program history.

Still, even with gaudy high school stats, it’s uncommon to see a freshman make such an impact for coach John Tillman’s squad, especially considering Maryland’s willingness to let young players lurk in the shadows and acclimate to the Terps’ style of play away from the spotlight.

Brennan bucked that trend, starting Maryland’s first game against High Point. And the newcomer quickly made himself a nuisance in the middle of the park. Early in the first quarter, Brennan whirled around the net twice and smashed both efforts past goalkeeper Parker Green.

The early goals were crucial for the Terps, who struggled to get themselves up to speed in the early moments of the season opener. Brennan’s scores propelled Maryland’s attacking force, one that would finish with a 23-goal display.

“Jack Brennan shot us out of a hole in the first quarter,” attackman Logan Wisnauskas said after dispatching the Panthers.

And Brennan’s proclivity for timely goals surfaced again on Saturday.

With the Terps down 12-9 on the scoreboard against Richmond — and up a man on the field with nine minutes left in regulation — Brennan took up residency behind the net, an area he has frequented in his first two games.

Once he saw space open up in front of the crease, he darted to goalkeeper Jack Rusbuldt’s left and flicked his shot past the netminder’s stretch.

Brennan’s first goal gave the Terps life after a listless display in the first three quarters. His second, in contrast, gave Maryland hope. And whenDeMaio’s teammates swallowed him in a wave of red following his double-overtime game-winner, there was only one name on his lips.

“Jack’s been doing a great job for us, he’s been shooting the ball really well and that’s a credit to his work ethic,” DeMaio said. “He’s just doing it the Terp way.”

Brennan may be a quiet figure in the eyes of his teammates, but as long as he continues to rack up goals and assured performances, it will be his teammates whose voices will be the loudest — in their celebration and in their appreciation.